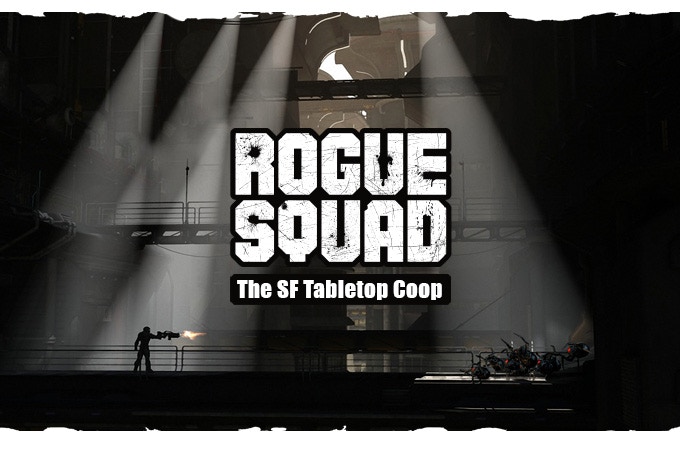 The Game
Rogue Squad is a cooperative science fiction board game that combines thrilling combat action with exciting strategic challenges. In this fast-paced futuristic adventure, 1 to 4 players step into the boots of a misfit band of mercenaries who must battle their way through swarms of bloodthirsty aliens to fulfill their mission.

Each player controls 1 to 4 mercenary troopers. Steer the squad’s combat robot, share equipment, manufacture weapons and ammunition from whatever materials you can scrounge, and – above all – cooperate to stay alive and carry out your mission. Only a combat unit that works together can hope to stand against the aliens’ overwhelming numbers. Rescue your comrades, argue over the best routes and tactics, upgrade your combat skills, and even fight for leadership – but whatever you do, be quick about it! Because one instant, you may be the predator… but the next, you will become the prey.

Rogue Squad is an exciting turn-based game with easy-to-learn rules. Depending on the mission’s level of difficulty, one game lasts from 20 minutes to 3 hours. A fully developed universe, intriguing characters, and story-based missions allow you to focus as much (or as little) on roleplaying as you like.

Launch into a dark, gritty science fiction adventure with this remarkable, action-packed board game!

Since we’re from Germany, it’s important to us that Rogue Squad is accessible to German gamers. That’s why we’re making a German PDF version available right from the start, at no extra charge. We’ll put the PDF up on our website before the game even ships. You’ll be able to download it, print out the cards, campaign material and manual, and start playing in German as soon as your game arrives.

We really want to be able to offer Chinese, French and Spanish PDF versions right from the start, as well, and have included these translations as a stretch goal. If this stretch goal is unlocked, you will also be able to download PDFs of the cards, campaign material and manual in these languages, and start playing in Chinese, French or Spanish as soon as your game arrives.

As for other languages… we have big plans!

Worldwide shipping is included in all pledge levels. There will be no additional shipping charges for our backers at any point. Shipping will be handled by Ludo Fact’s logistics experts Ludo Packt, ensuring that all games arrive safe and sound.