The stars are gone. But still so far to fall.
Left is darkness and eternal Death.

A TTRPG game like no other. Unique world with a focus on character building and evolving. Creating dark legendary tales in an ambient heavy world. Brand new system for creating and leveling characters and their epic gear. Filled to the brim with glorious heretic art. Easy to play - Hard to survive. But is Death really all there is?

Dark Souls in a futuristic legendary pantheon, where Satan is God. 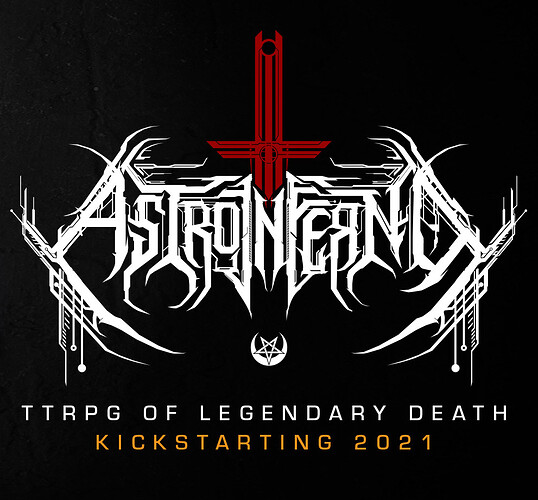 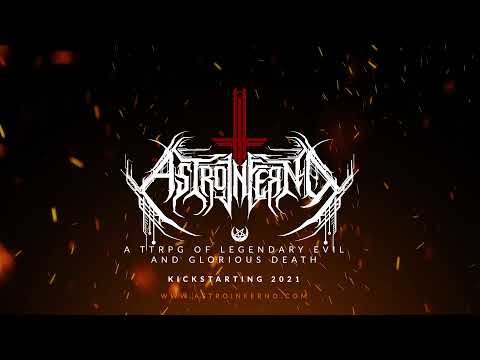 “The stars are gone. But still so far to fall.
Left is but darkness and eternal Death.”

A TTRPG game like no other. A truly unique setting with a focus on character building and evolving. Creating dark legendary tales in an ambient heavy dark world. Brand new system for creating and level characters and their epic gear. Filled to the brim with glorious heretic art. Easy to play – Hard to survive. But is Death really the end?

Dark Souls in a futuristic legendary Pantheon, where the Black Ghost rule, darkening his power with the blood of the innocent.

Astro Inferno is an innovative TTRPG with a focus on ATMOSPHERE, SYSTEM and CHARACTER DEVELOPEMENT.

Humanity is lost, Earth is lost, the Universe is lost.

Left is the Fractured World, a void where physics have been replaced by blasphemous rules. Where legendary places exist within walking distance of each other and still eternities apart. Where dark powers rule with laws as inverted Davidian psalms. Where slave and man and king pray to the Dark One for salvation and God only exists as an obscure parameter in an AI main frame.

The Players take on roles as Death Singers, chosen Souls and the only hope of salvation in the Satanic Legendary world. They live their verses exploring the infinite enigma of horror and splendor where dark dominions of the Black Goat and Ancient Gods rule. Most are misled by the Fallen Angels and follow the left-hand path of selfishness, deep into corruption and power. Some shimmer of aether and align their goals with Elysians and the Ancients. Some live their afterlives without care of the forces be, exploring the depths of the Abyss and forging their own bloody paths through Fracture.

529×569
Life in Fracture
Fracture is seen very differently for different Forms; Undying (Surviving Humans) and Souls (Humans who died in the Rapture).

Souls gather in communities trying to survive the corruption, the monstrous beasts, and the twisted laws that rule this wretched place. They live a somewhat medieval life in small settlements or cities. Could be as mundane as an old space station converted into a village, an old mythic castle reused as a small city or it can be as the legendary cities of Citadel or Babylon with hundreds of thousands of souls. The Souls gather resources from around their communities and sometimes manufacture and sell gods to other communities. Some Souls are taken from their existence and set to work for the Harbingers or as slaves in large industrial complexes doing the Dark Lords horrific tasks. Industries of sacrificial chambers, unholy rituals and refineries of aether and unlight. To Souls this world is old as time itself and has always been like this for one thousand years. They know of the Rapture as a mythic event that happened a long, long time ago, before anything existed.

To the Undying, the Rapture happened a decade ago, some even saw it with their own eyes. Most were Astronauts or Scientists living off-world when the stars and planets started to crumble into dust. Most humans have lived through the Great fog that followed, inside a halting space station seeing resources and supplies slowly decline over the years. Only the most resourceful Undying have survived and in a way or another found their way into “another place” and into the society of Fracture.

Undying are unique in that they easily die. They need oxygen, they are hurt badly by vacuum and they need food to survive. Souls on the other hand don’t breathe and vacuum is hurtful but not directly lethal. Souls enjoy food though, for those lucky fools who still have a throat and a stomach, food is among the most valuable commodities, but they don’t need it to survive. But the Undying has something that Souls often lack, which makes them into threats for most of the Dark Powers. They have Faith.

In the core book there is also a Form called Lilith which is a third form apart from the human forms “Undying” and “Souls”. Liliths are demons who have the ability to take on the bodies of humans and live an eternal life through constant body swapping.

The new “STORY – STAKES – STATS” system is developed to make it feel lightweight without undermining the essence of character development. True lightweight systems are fast but often leave you with a hollow feeling when it comes to character depth.

Story comes first in Astro Inferno, if there is a great story to be told then the rules are set aside to create that story. You roll one die to determine the outcome of your action and that’s it. The Roll will tell you your level of success and if you progress the story or if the story instead turns on you. Every roll will matter, and no action will feel the same.

Rolls may end up in a multitude of ways:

Depending on your outcome your character will be able to do a multitude of actions. Three Story Points on a sneak roll could in excess of your great sneaking give you the possibility to snatch something on your way or get a clue towards your end goal. Every Story Point exceeding the requirement gives you one more action even if it’s not related to the skill or stat you rolled for.

This solution makes ALL skills and specializations better and more balanced. And fasten up action when it’s needed.

“Arlon, you hear the heavy sound of the Golden God Sentinel outside the bridge doors and as sparks and hot glowing plasma splash into the room’s non-gravitational space, the dark metal starts to bulge and melt. The Sentinel will be inside the room in a couple of seconds. You need to hack the computer, get the airlock open and throw yourself outside or you are in a very confined space fighting the equivalent of an excavator with huge guns.”

This scenario could be played out in Astro Inferno and Call for a roll of Three Story Points. Arlon could in this instance choose to roll for Genesis Tech (Hacking the computer), Mechanical (getting the hatch open) or Jump or Run (getting around in Zero G). Three Story Points in any action would result in Arlon getting away scot free, but if he only rolled Two Story Points he would Hack the Computer and get the Airlock open and then the Sentinel would be inside the room.

If poor Arlon only rolls a Bare Success he would only Hack the computer and then miscalculate the Sentinels attack and be surprised by the machine’s entrance. A Failure would mean that he has not even got into the computer and is just dumbfounded by the Golden God entering.

Botches and Perfect is exactly what they sound like. A Botch is the worst thing that could happen, Arlon would stumble and get caught in some space debris as the machine enters the room. A Perfect result would be Arlon exceeding his task, getting the hell outside and even getting the Airlock closely shut behind him.

”If you don’t defeat the creature this round, one of you will die!”

Stakes will make sure you feel the suspense making your decisions and keeps the waves in the game high. Astro Inferno is loaded with different stakes the GM can present to the players. Creatures and actions all come with a variety of stakes of all kinds. Dramatic, unfortunate, blessings or extreme.

In combat stakes that will be handled a little differently making combat somewhat of a puzzle against the enemies AND the stakes to achieve victory. You can be presented with a choice in defeating the main bad or trying to destroy his gun to lower his damage output. You could be getting a piece of legendary gear IF you defeat the enemy captain this round.

Stats are fun and make characters and gear feel diverse and unique. Does a certain ability make you better in certain situations, does your armor make you faster or a better magic user? But Stats can be a hassle of coordinating and handling in the middle of a game. In Astro Inferno stats are handled like add-ons to your character instead of separate bonuses and have tried to make it as streamlined and easy as possible to handle and govern your stats without additional counting.

We think stats are so fun that we also added a system to roll your loot without having it bogging down the game. When you slay some enemies, roll a D20 and see if they have anything worthwhile, depending on the situation or the GM you get a result. “Masterful Weapon”. YES! Pack it into your already Legendary Dimension Backpack and get going. Get the gear to a Blacksmith and see what the hell it is. If you for instance instead rolled a Mundane, you can keep it without analyzing it and use it to upgrade your own weapons or armor keeping the hassle of giving stats to redundant items altogether.

With hundreds of Abilities, Marks, Arcane Powers, Masters and Corruptions, your character will feel truly unique. Within the Legendary Satanic Space there are thousands of ways to evolve and only imagination sets the limit on how powerful and truly corrupted your characters end up. You may rock a Knight with such incredible strength that he can throw people as dolls, a Necronaut with movement so high he may leap buildings in one go.

But they all start at the bottom as, worthless dogs, slowly corrupting and brewing into sacrilegious beings – until their Master finds them.

So where are our Characters going?

Will they end up as servants to the Worm Gods horrible bile filled existence?
Will they travel through on a Hellish Odyssey and end up as legendary Death Singers finally escaping Inferno?
Will they make pacts and through the Ancient Gods find a way to the lost Garden of Ash, the Asphodel Meadows or Elysean Fields?
Will they Dethrone the powers of Satan’s Court and become Satanic Princes themselves?
Or will they be misled by the Ancient Serpent Deceiver all together?