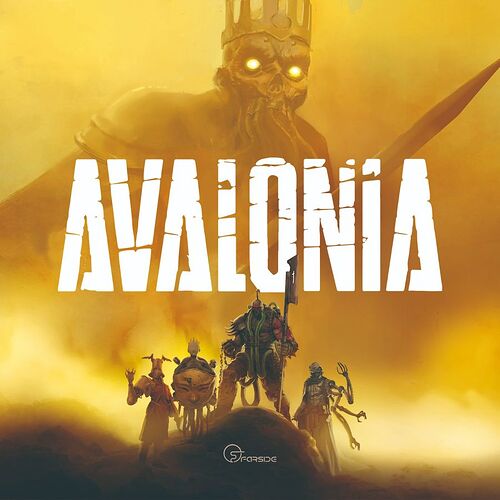 Theme — Avalonia is a wargame genre strategy board game. The story of Avalonia transpires in the lands of Avalon after King Arthur was betrayed and defeated by the four tribes, being left sedated on the Excalibur Tower. A plague was unleashed through the Excalibur, twisted most of the Pure Bloods into Variants, and made them permanently infertile. The four tribes — the Reapers, the Raiders, the Saviours and the Seekers, all thirst for power, endeavoured in hunting down Pure Bloods, using them as breeding machines to sustain the strength of the tribes. Now, a dreadful tribal war is embarked, never ending until someone crushes down the others and takes over the throne in Avalon.

Gameplay — Each player will lead a faction, aiming to expand their army, gain resources and conquer lands on the Avalon Map in order to be strong enough to defeat other factions. There are four phases for each round, the Planning Phase, Action Phase, King Arthur Phase and the Clean Up Phase. During the Action Phase, players have to decide their own combinations of actions to be taken from the 6 types of actions available. Over the course of the game, players have to win Artifact Units before the others, gain Pure Blood resources and eliminate troops from other factions. There are two ways of ending the game, either when the Throne Area of King Arthur is full or when one of the players has reached the ultimate score.

Objective — Players gain Victory Points through harvesting Pure Bloods. In whichever ways that the game ends, the players count their victory points, whoever gets the highest victory points wins the game and becomes the new ruler of Avalon.

[AVALONIA]
Besides everything is going on with Epic Seven Arise, Farside team been hard at work testing and balancing Avalonia, our upcoming strategy miniatures board game. 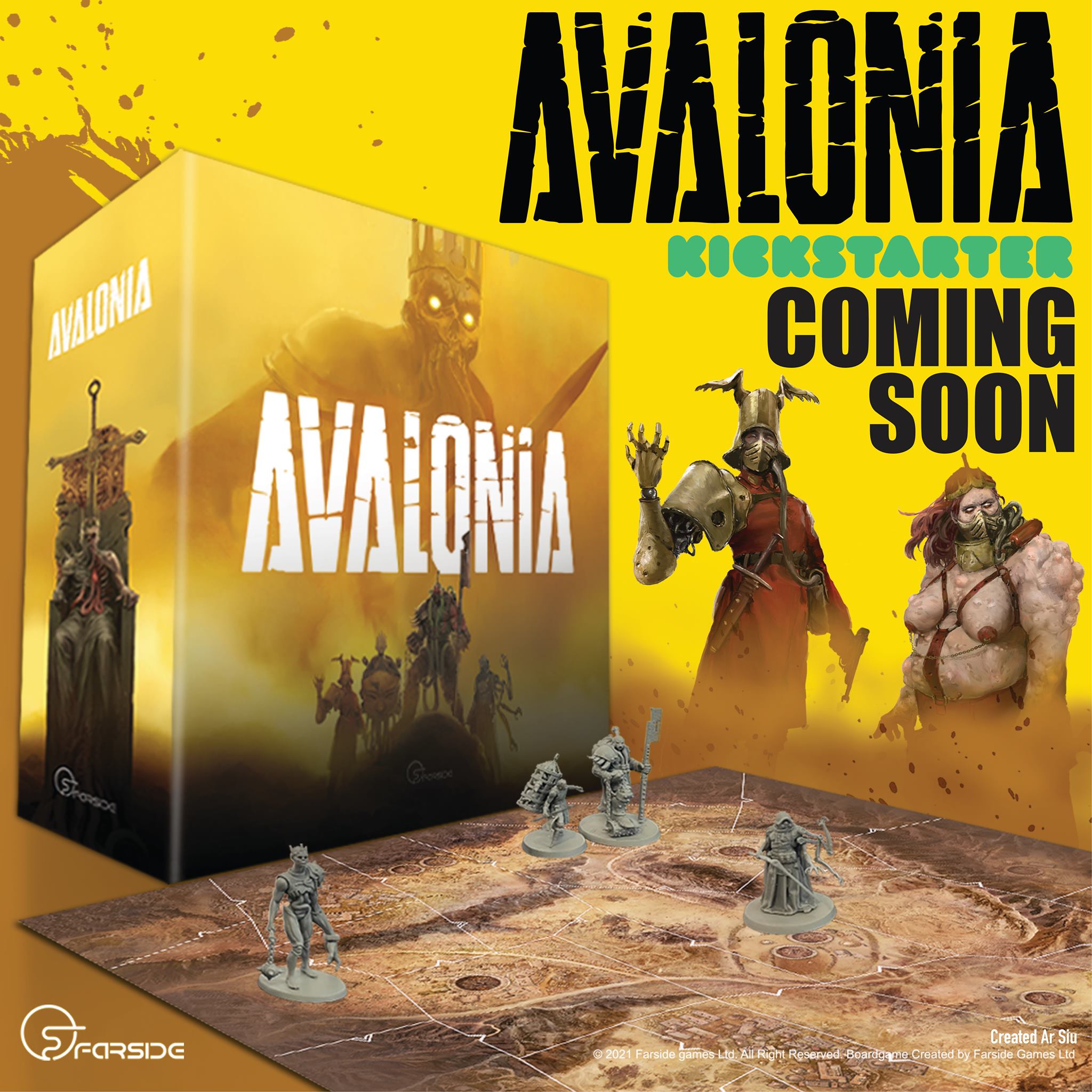 [AVALONIA]
Avalonia - our new board game is coming soon on Kickstarter

[AVALONIA]
Miniature design - Seekers Advance Unit
There would be advance units for all the tribes, here’s the one for our tribe dwelling near the lake — The Seekers.

During the game, players can execute the spawn action to add more units of their tribes to the Avalon map, which allows them to expand their power and conquer more lands in Avalon so that they could win more victory points and resources.
The Tribe with the most invincible troop would be more likely to win the game and knock down all the other tribes. 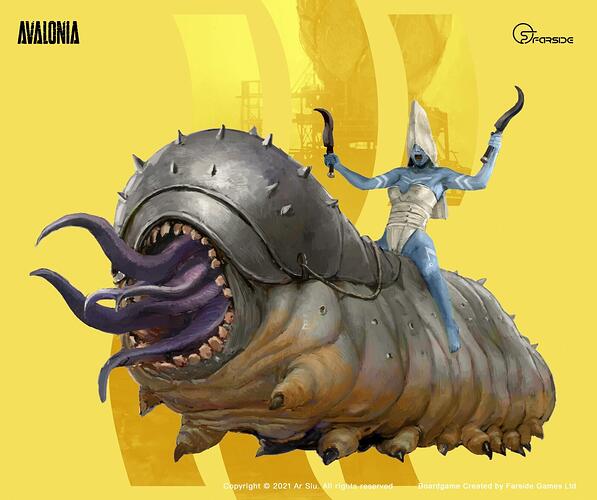 [AVALONIA]
Action cards sneak peek
During the Action Phase, each player takes a turn in initiative order.
Action 1: Move
An action that allows the players to move their own faction units to adjacent zones.
Action 2:Attack
An action that allows the players to attack opponents standing on the zones that their own factions is in control of.
Action 3: Research
This action allows players to take a new action card from the research area for their own use.
Action 4: Harvest
This action allows players to take a number of resources, namely “Pure Blood Adults” from the Pure Blood Trader that he is in control of.
Action 5: Spawn
This action allows players to produce more faction units in their own Headquarter zones by paying sufficient resources.
Action 6: Counter
This action is only used when your faction is being attacked. To execute this action, you require units that serve counter ability to avoid the attack from others.
« TRAMPLE ! CRUMPLE ! BLOOD CRAVES INDESTRUCTIBLE ! » 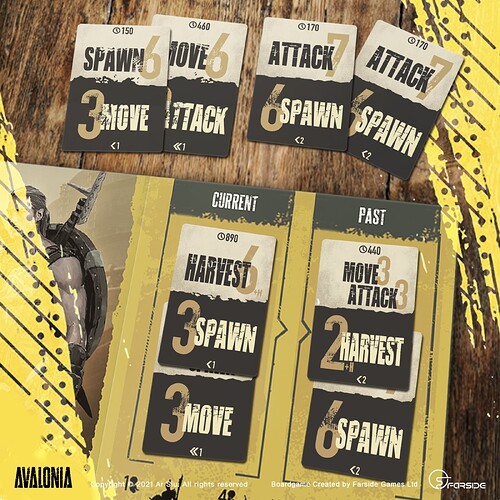 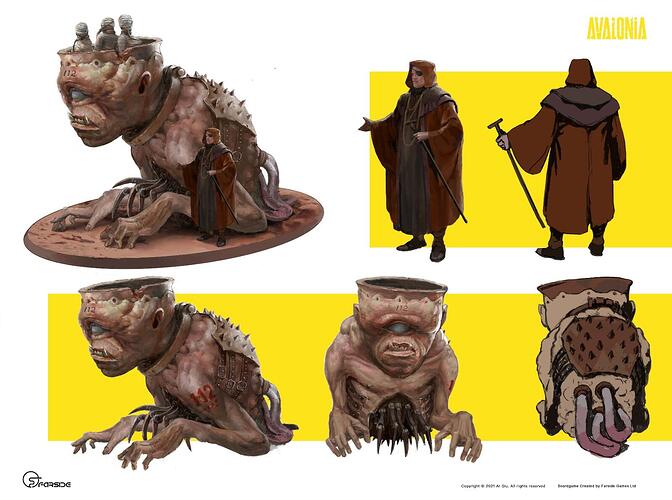 [AVALONIA]
Miniature sneak peek, Saviours - Cador
« Knights? No, they are fools. A jester. A stranger. A wife betraying her husband. A dreamer. What else can you call Cador, Dagonet, Guienevere, and Lancelot? »
Cador, a member of the Saviour – the new knights of the Round Table
The Saviour is one of the four tribes in Avalonia, more will be coming soon! 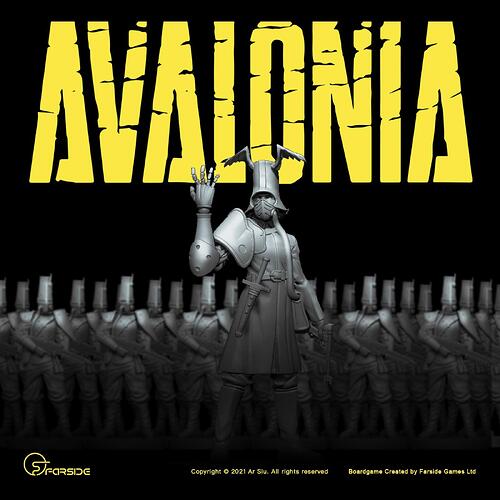 [AVALONIA]
Miniature sneak peek, Raiders - Green Knight
And the Green Knight, who would not break his word, even though Merlin tempted him. 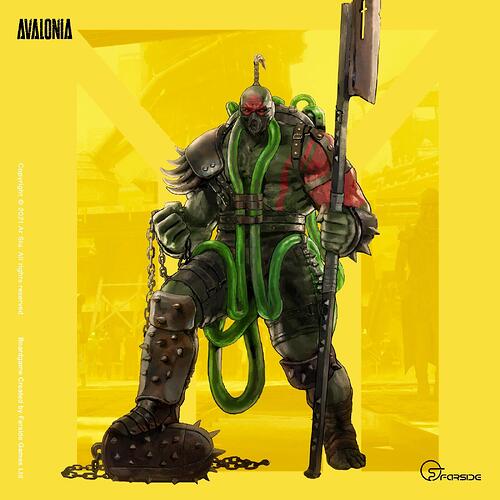 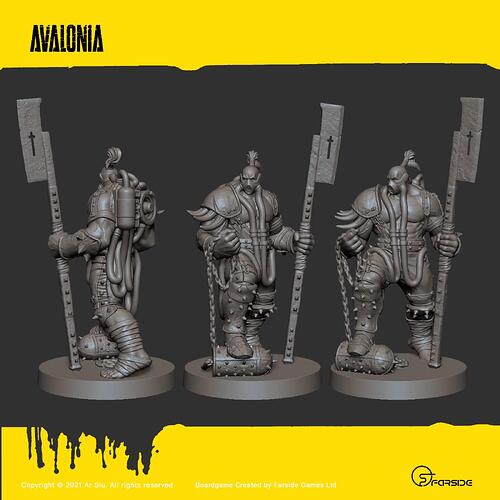 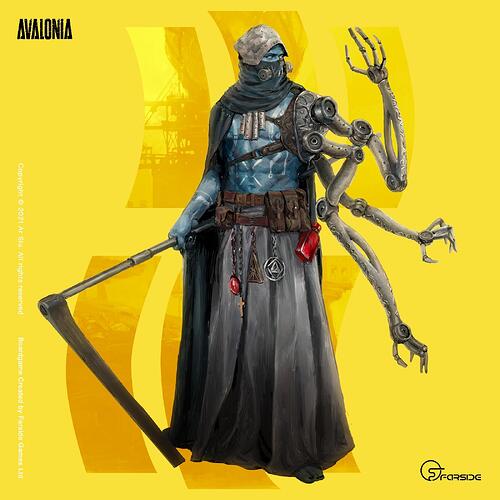 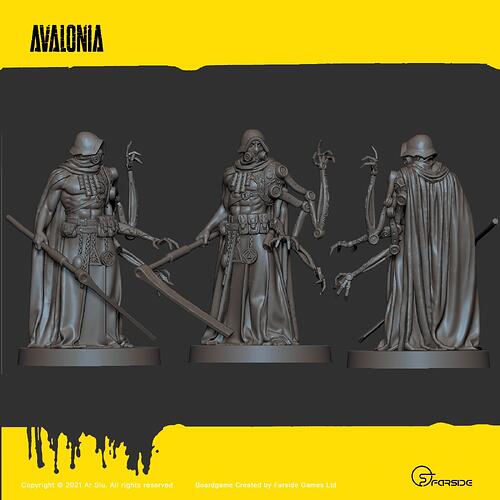 [AVALONIA]
The plague broke in Avalon, turned our world to stone and drought, where nothing could live in comfort, men least of all.
Only us, the few innocents, too young or too humble to be affected, retained our pure blood. But that was a curse of our own…
They say I will be the mother of generations. They say I am honored, valued, that the sun and skies smile upon me. Yet the tubes crawl beneath my flesh, and I am too weak to stand. 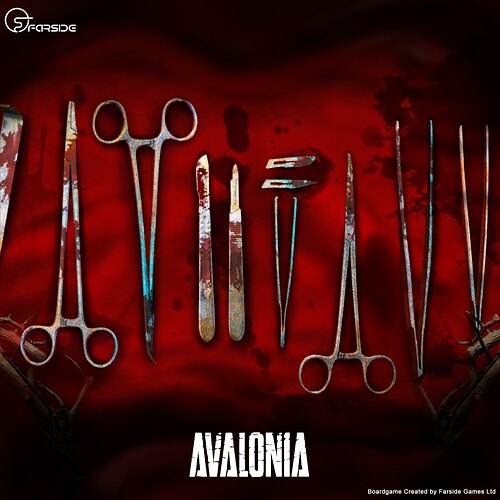 [AVALONIA]
Pure blood is the most precious resource in our new game.
For nothing pure can remain free in Avalon.

So we hunt the innocents, harvest their Pure Blood, keeping them from others who would do the same.

Enough Pure Blood to bath in, hundreds, thousands of bodies, ripe for the taking. Food. Water.

We need you in the game! Prepare for it 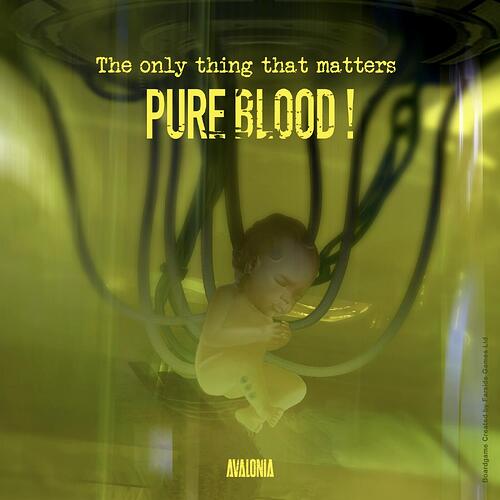 [Avalonia]
Judge us however you want, your words will not strike us. We are free, understand? Free to roam where we please. Free to ride, free to take, free to follow whomever we want. 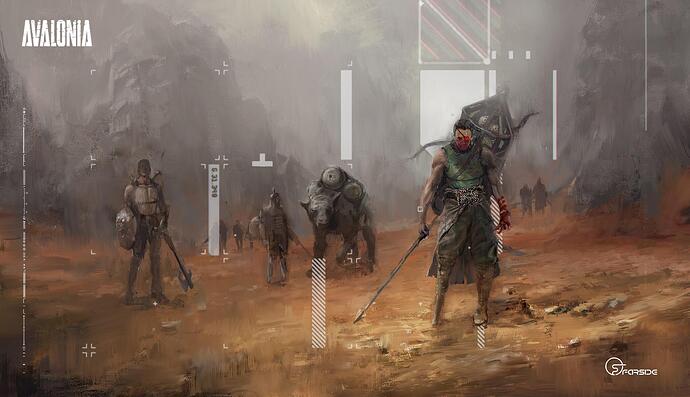 We strive for the best to create delicate and unique designs in our productions. Hence, our products are all finalised after going through various stages of confinement.

One of them is the finalised design… 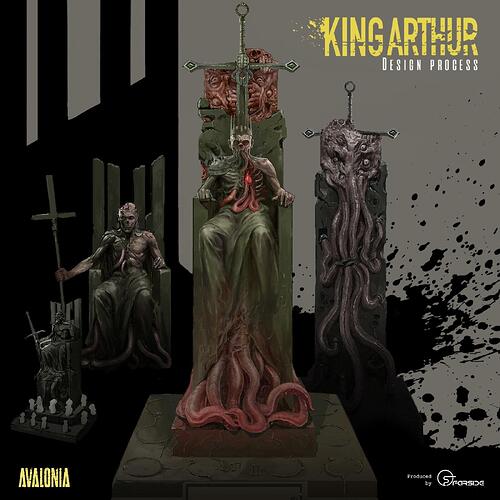 [AVALONIA]
The wastelands are cruel. Nothing grows here but dust. Nothing breeds here but snakes and sand-lice.
So love to starve. Love the dust and the wastes. Starve and live. 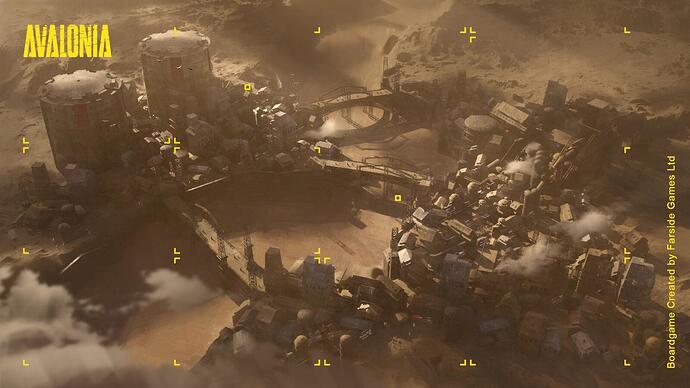 [AVALONIA]
Once, the world was pure. Endless forests covered the land, bearing fruits so sweet they would melt on the tongue.
Once, men were pure, with blood red as garnet and carnelian and rust. Pure blood, healing blood, in a time when every man could sire daughters, and every woman bears offspring.
Oh, what a place of wonders Avalon was, where all men lived in comfort and no man toiled…
« TRAMPLE ! CRUMPLE ! BLOOD CRAVES INDESTRUCTIBLE！ »

Miniature Sneak Peak - Leader of the Raiders, The Green Knight.

« The Green Knight, who would not break his word, even though Merlin tempted him.
So what if Avalon betrays us. So what if Merlin hunts us. The desert is our land, and the knights are loyal to us, who serve them. And anyone who disagrees is so much blood and bone for the taking. »

The Raiders is 1 of the 4 tribes in Avalonia 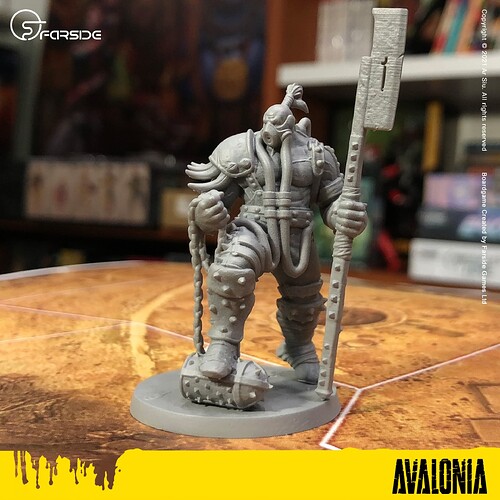 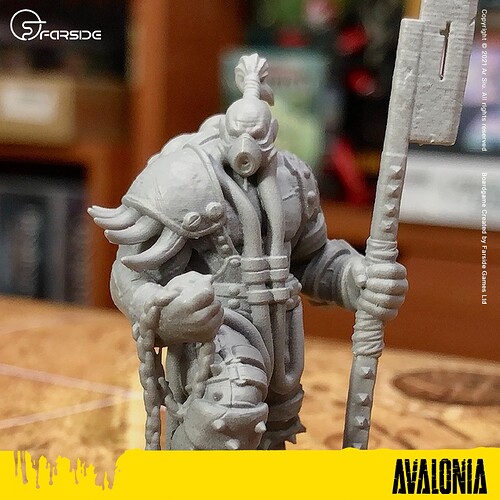 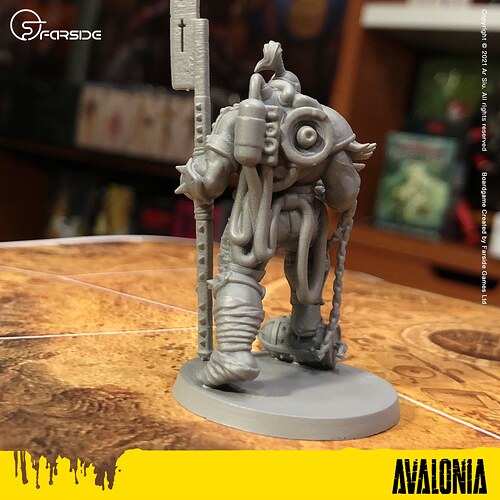