« Hey, do you guys have any canned peaches? Man, I’d trade an arm and a leg for that right now. Not mine, somebody else’s. »

Victor Zsasz could not be missing among the Arkham´s citizens, so he will be present in Batman: Escape From Arkham Asylum.

Today is the day!

We are pleased to announce that our next Kickstarter, Batman: Escape From Arkham Asylum, will be released at October 26 2021.

Don´t forget to subscribe to our newsletter in the game´s landing, and stay tuned at our social networks to know all the details pre-release. We promise you a very special content! 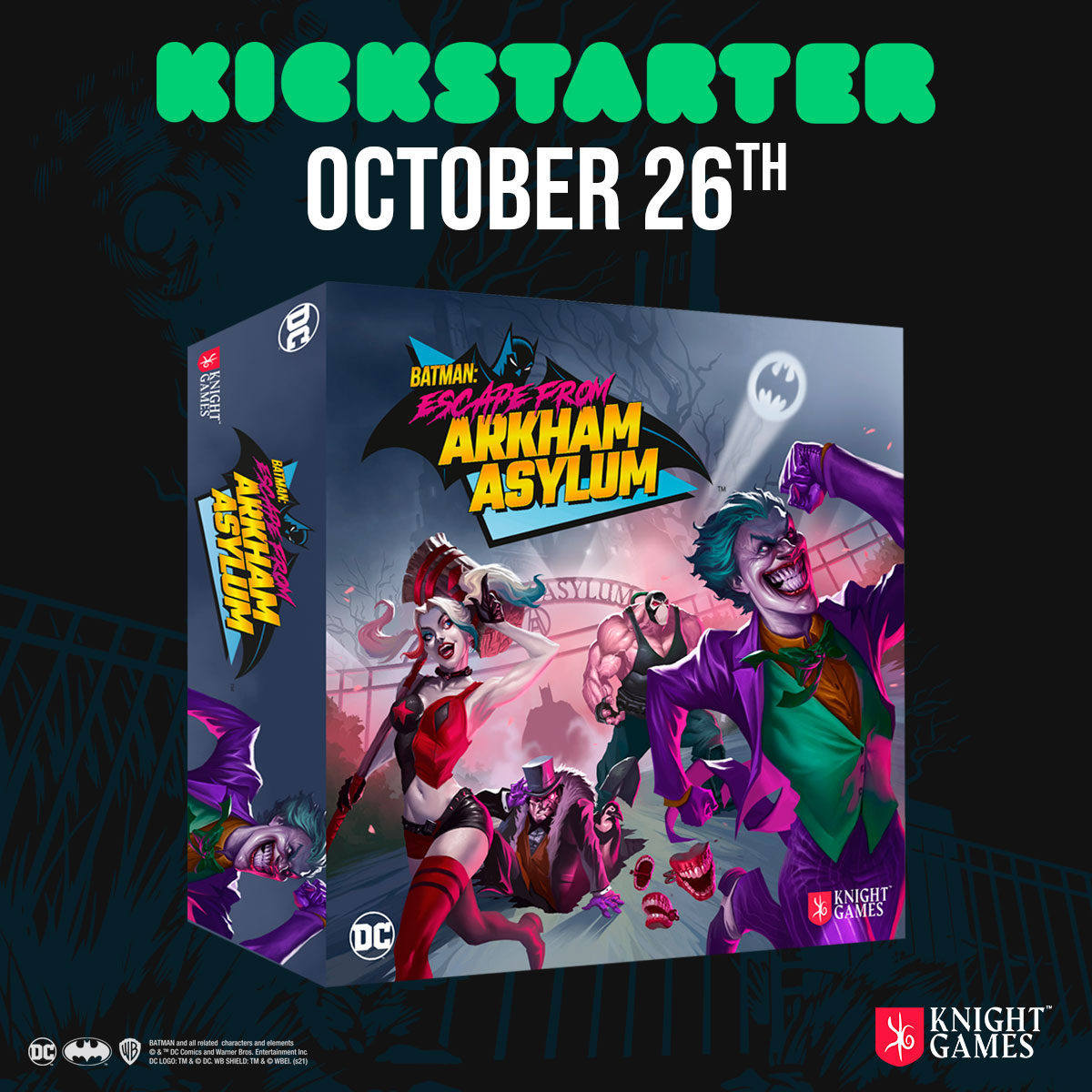 Hello, inmates! We return with news from the Arkham Asylum to show you a crucial element to try to escape from this place: Fighting! In Batman: Escape From Arkham Asylum the Combat system is designed to adapt to the character and thus give it an original touch that will make you change your strategy depending on the Super-Villain you have chosen.

We have already talked before about the actions that a character can perform. These actions can be basic, such as moving around the board, or more complex, like those ones that require dice rolls to solve them.

The action of Combat is one of the most complex actions because, apart from needing a dice roll to solve it, the life and ability of the opponent must also be considered in order to win the confrontation.

Combat works by pitting the opponent’s values against those of the character. The success or failure of the fight will be determined depending on the opponent’s strength and handicaps (if he/she has them) and your roll result and the additional abilities of the Super-Villain (if you have them and have decided to activate them).

In this part we will be able to observe how each character has his/her own techniques and abilities adapted to his/her actions to be able to face these encounters in a funny way that will give us a very deep immersion in the game.

The abilities of the characters will be represented in their character card and the character skills cards which you will have to unlock, achieving to overcome the objectives that they ask you to be able to use their improvements. Activating these additional skills will give the character certain advantages that he can use during the game.

During the development of the game, its mechanics have been seriously thought out to carry out a scenario in which escaping was not only a final objective but the most exciting part of the game, therefore, several handicaps can be found that will hinder the success of the characters. Hence, you can also have additional elements so that you can try to counteract the difficulties that you encounter along the way.

This is the way in which our Super-Villains will face the freak of Bats and his friends. What style do you think each of the characters will have? Stay tuned to find out more about Batman: Escape From Arkham Asylum and BE BAD!

Hello, dear inmates! We communicate again from the Arkham Asylum to show another of the components of the game Batman: Escape From Arkham Asylum . This time we are going to talk about dice.

Normally, the six-sided dice of a game do not have too much interest, but these dice are special because they have been designed within the aesthetics of the game to give the necessary information in a visual way.

As expected, the dice will be an important element of the game Batman: Escape From Arkham Asylum, since they will be the ones that determine the result of almost all the actions that can be carried out during the game.

The game has 3 different kinds of dice, which will have the same symbols, although distributed differently.

The dice have 4 symbols that we will analyze below.

These symbols would be the components of the dice included in Batman: Escape From Arkham Asylum.

We have reached a milestone in the number of subscribers of this newsletter: we are 10 000 Super-Villains! And to celebrate it we have a very big miniature to show you: Killer Croc! 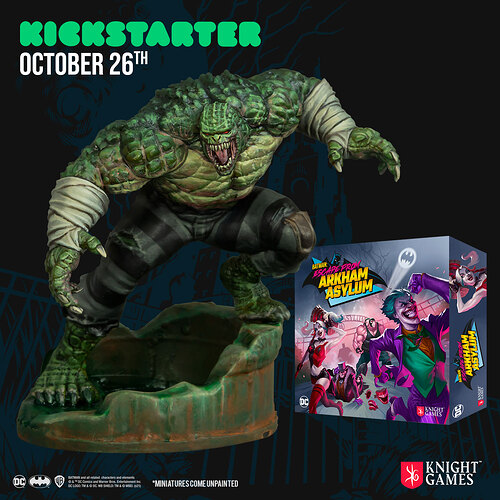 Arkham Asylum workers are used to working with the most dangerous guys in town. To « relax » them they simply used techniques of dubious morality, making their character even more insane.

Now, they are prepared to prevent the Supervillains from escaping from their territory. Will they be ready for the show or will they end up being just another victim of their long history of crime? Find out in Batman: Escape From Arkham Asylum and BE BAD! 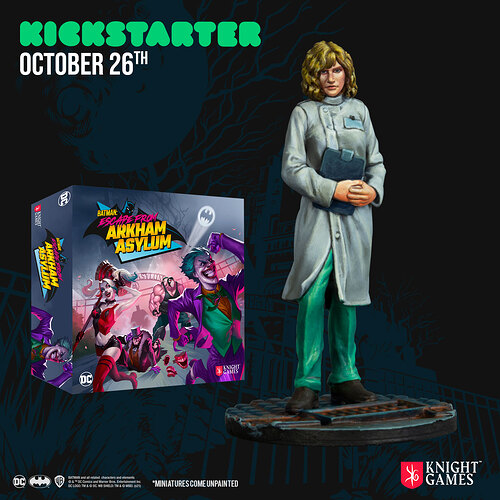 Hello, Inmates! We’re back to bring you more updates on our next Kickstarter project, Batman: Escape From Arkham Asylum. This time we will talk about its cards, the abilities of the characters and finally we will explain what the Infamy Points are for.

In the game we can find several types of cards that will indicate us from the information of the character to the type of encounters that will take place in the Arkham Asylum.

Character Cards will be one of the most important. These Cards bring all the necessary information to know the life, abilities, which dice to roll and possible weapons that can be made with the objects that the character is finding. These objects are represented on their own cards.

In the Skill Cards deck each card contains an item that will give the character an additional ability (It can only be used once, then you will have to discard it) or saved for crafting together with other items.

Each object will have one of these letters: M (Metal), P (Plastic), O (Organic) or M / P / O (you choose the one you want). These cards will determine what kind of material these objects are made of and you can put them together to create the weapons shown on the character cards. The crafting action has no cost and the materials to be used will be specified on your character card.

There are also the Reference Cards that will expose certain objectives that you must overcome together during the turn. If these objectives don’t happen, players will be penalized by raising the alert level and receiving Event Cards.

Event Cards are the most common in the game. They have two functions. The first will be to give handicaps to the game, and the second will be to indicate the location of the Nailed markers as you progress through the rooms of Arkham.

Adversaries Cards. These cards show the adversaries who are going to enter the game. When two Nailed markers coincide in the same room, they will be removed and replaced by a group of opponents. To find out which opponents will come into play, draw a card from the deck of Adversaries cards. As the alert level rises, the tougher opponents get into the deck to increase the difficulty of the game.

The abilities of the characters

Once the type of cards that the game brings has been explained, we will talk about the Character Skills.

Character skills are adapted to each Super-Villain to create a good immersion. In addition, apart from these we have the additional skills that we have been talking about before to be able to win the most difficult rolls that you can find on the way.

Finally, we will talk about the Infamy Points.

The rage of Bane!

We are just some days away of the launching of Batman: Escape From Arkham Asylum!

For that reason, today we want to show you a new miniature! Are you ready to see this HUGE Bane? (character Skin)

Write in the comments what other Bane Skins you would like to see in the game! 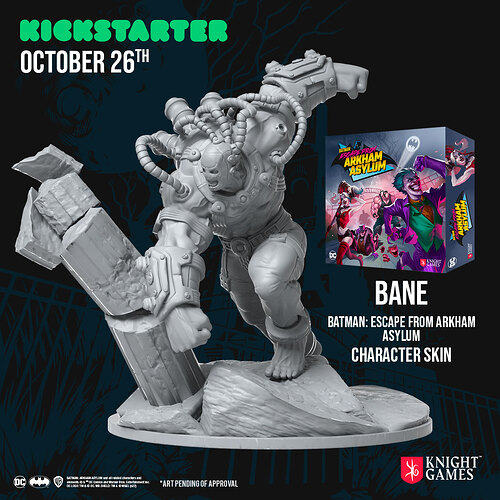 Hello, inmates. We speak to you again from the Arkham Asylum to show one of the key elements of the game, its randomness.

One of the keys that we have highlighted from the first day we announced the game is that Batman: Escape From Arkham Asylum has been created to make each game different, but how exactly does this game mechanic work? That is what we are going to explain next.

The different rooms and corridors placed at random will be a perfect starting point, since apart from creating a different scenario for each game, the fact of not knowing the cells and corridors until the character crosses them, gives you a feeling of uncertainty very important for the immersion of the game.

The various decks of cards also give random conditions and handicaps. The Event Cards will not only indicate where the Nailed markers will appear, but will also add handicaps to both the game and the players, so while you are playing you will not have the feeling of having everything under control, on the contrary, you will be attentive to everything that can change around you, thus creating an immersion in the game never experienced in this kind of games.

The Nailed markers will also deploy the opponents, and they are not conditioned to appear on a specific cell by any rule, so their spontaneity will cause the players to be expectant about what is going to happen.

The Alarm Level will be another of the components that affect this randomness because depending on how high the alarm is, the opponents that may be in the game will be more or less tough.

Several cards of this style will make Batman: Escape From Arkham Asylum be directed by a random combination that will give a personalized dynamism to each game, such as, the Object Cards that, although not directly give this element, when giving you another kind of opportunities you will be yourself when using them when you will create the expected dynamism.