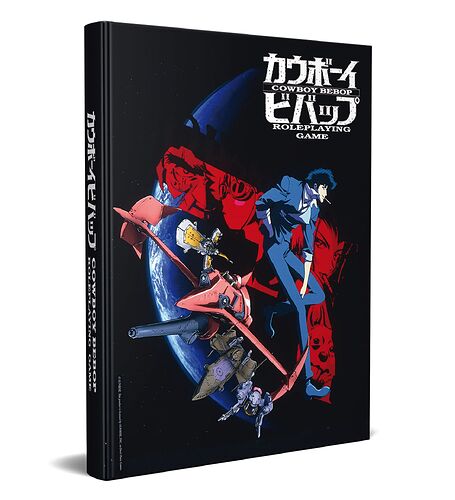 Don’t Panic has worked with Sunrise - the Japanese animation studio that originally produced Cowboy Bebop for television - in the past on titles such as Attack on Titan: The Last Stand and Naruto Ninja Arena. In fact, this will be the second time both companies have collaborated on a Bebop-based game, as Don’t Panic Game published the 2019 card game Cowboy Bebop: Space Serenade.

The third partner, Mana Project Studio, previously handled titles such as Norse Grimoire, Historia and Journey To Ragnarok. Their latest RPG, the hero-centric and genre-melding Not the End, won the 2020 Italian Game of the Year award. Fumble GDR, the creative team behind Not the End, will be designing Cowboy Bebop: the Role-Playing Game

“Cowboy Bebop is part of those anime that made up our cultural background. As fans of the anime, we are thrilled to be able to work on this project, a unique opportunity to design on both the themes of CBB and its strong visual identity. Our goal is to share our passion for Cowboy Bebop with you with this game,” said Michele Paroli, Mana Project Studio founder and lead designer, in a press release.

It will be interesting to see how the world and characters of Cowboy Bebop translate to the table. The 26 aired episodes - ahem, sessions - portrayed a solar system gripped by wheels-off capitalism that seized complete control of a human race that fled Earth in the wake of a global catastrophe. Much of the people and factions were framed by the crew of the Bebop and the personal demons haunting their journey.

Those attending Essen Spiel this year can visit Don’t Panic Games booth for more information on the upcoming title. The Kickstarter campaign for Cowboy Bebop, the Role-Playing Game launches sometime in 2022, with pricing and release dates likely not coming until that point. Cowboy Bebop RPG will let you play as the anime’s characters, won’t touch the...

Players will be able to take control of the Bebop crew or create their own interplanetary bounty hunters.

Haters gonna hate and we accept that. Michele Paroli discusses bringing the beloved anime series to the tabletop, how the RPG will play and why it's more than a licensed cash-in.