The game will launch with four factions at the heart of it and gameplay options which include going head-to-head with another player, teaming up for two-versus-two games or perhaps even diving in to play solo against an inbuilt AI for the game.

Games play in around forty-five to sixty minutes meaning they seem well-suited to a couple of skirmishes in the afternoon. During your games you’ll be taking control of 28mm scale miniatures like those you see here in small combat groups of between three and seven units each. As well as focusing in on that kind of skirmishing gameplay you’ll also have the chance to play against some of the terrible beasts from this world as we hinted at above which can be controlled by a player or the game.

Because the team behind the game are students of history, they have tried to work that passion into the factions and the miniatures that make them up. Influences from East-Asian culture are woven into Eldfall Chronicles and as they are also practitioners of medieval martial arts they have tried to carry that over into a realistic portrayal of combat despite this being a Fantasy world.

If the campaign is successful on Kickstarter then they want to take the time to expand the game by adding in new units, factions, lore on a monthly basis. What the team really want to achieve first off is an activate community that can work their way into the living world that they want to grow around Eldfall Chronicles. 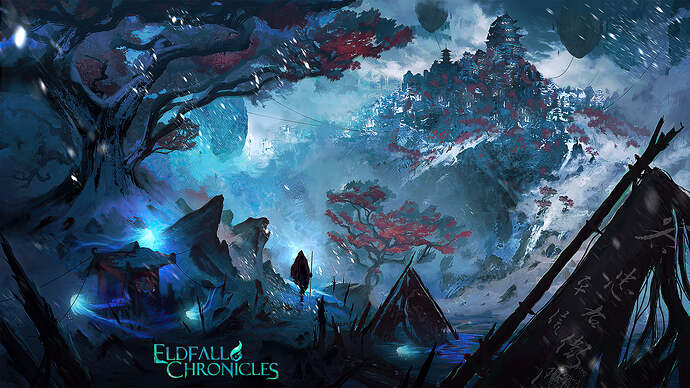 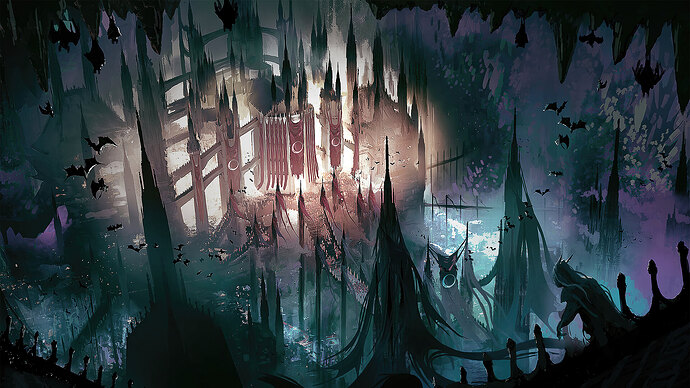 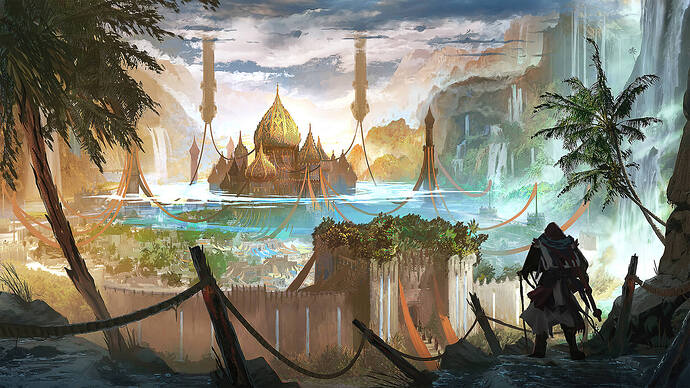 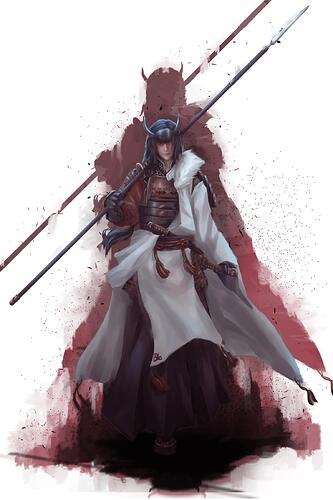 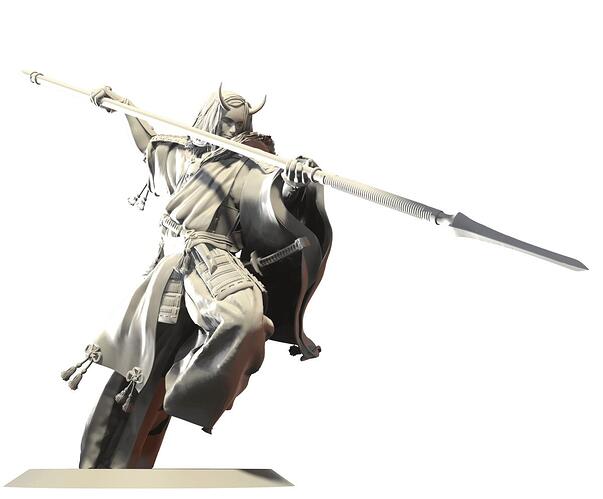 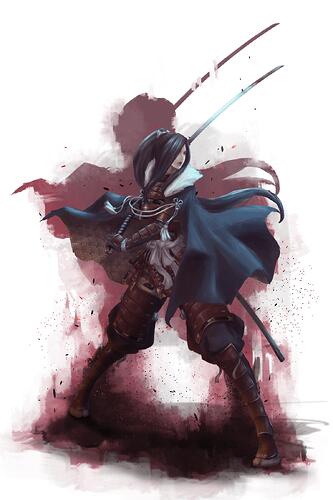 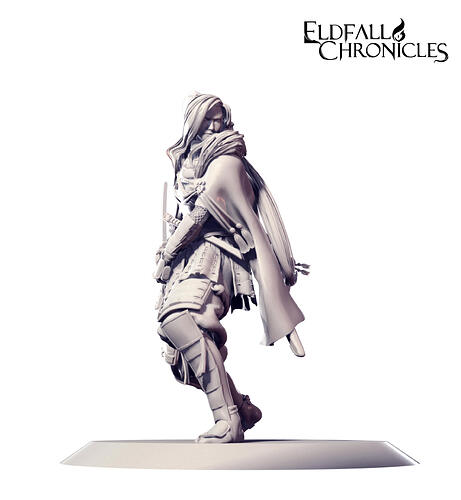 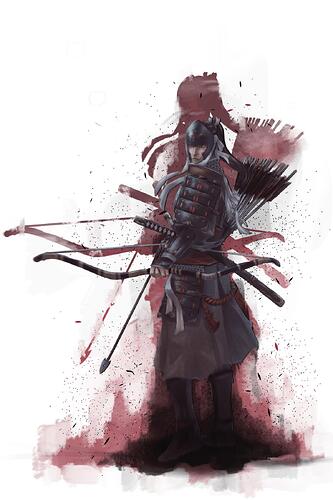 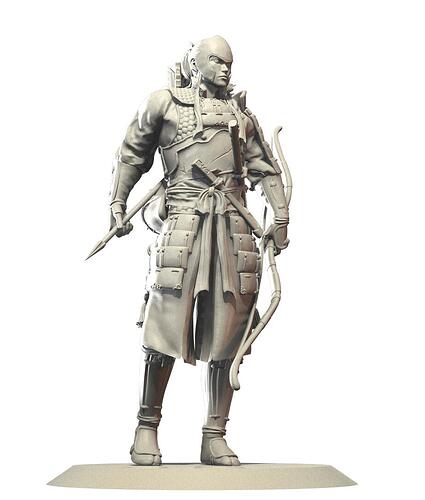 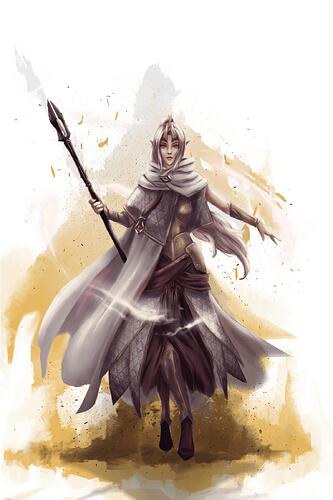 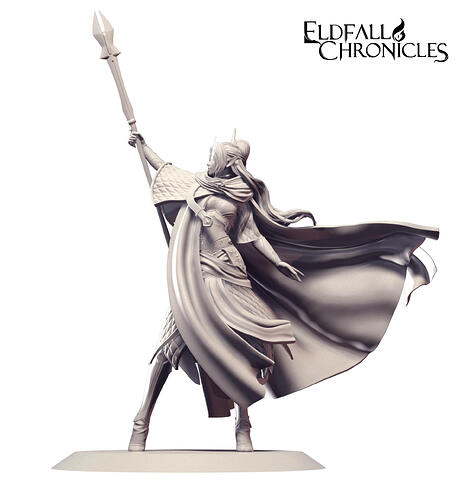 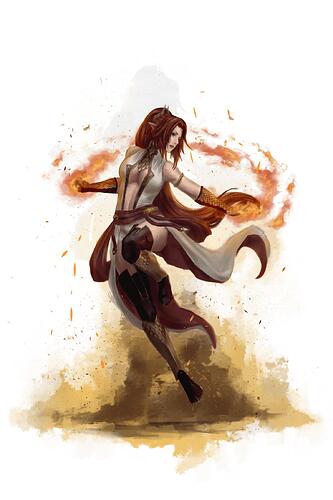 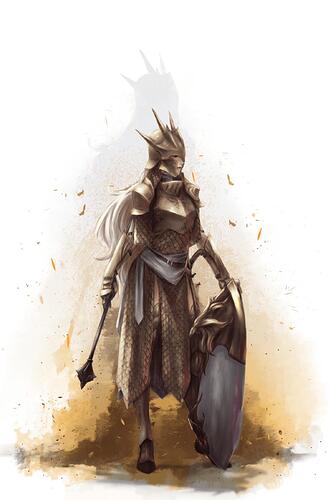 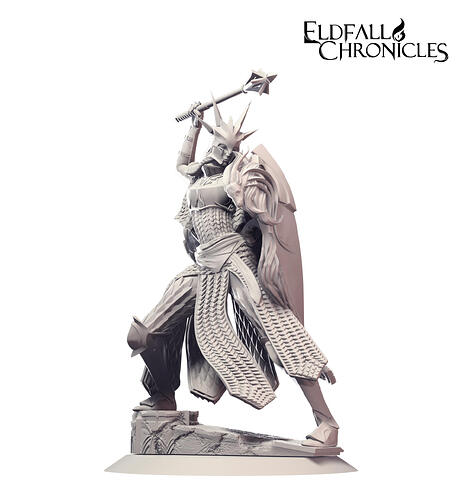 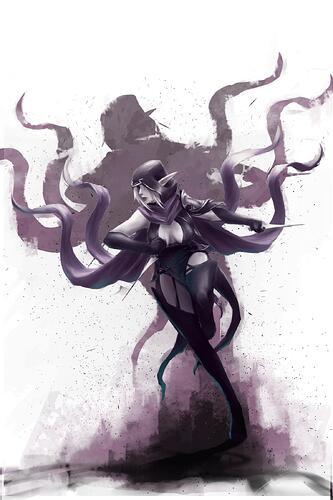 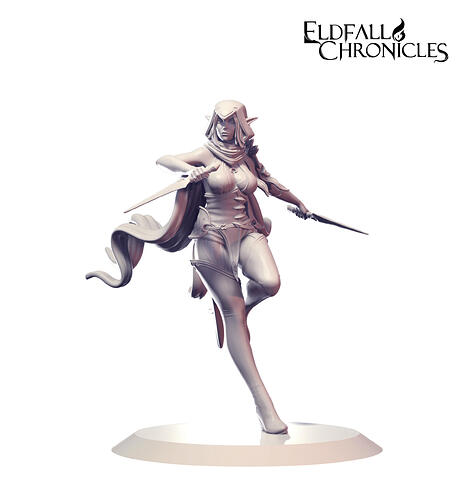 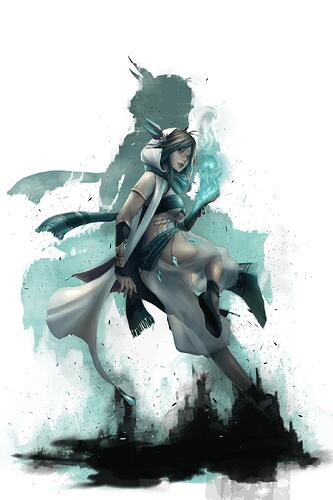 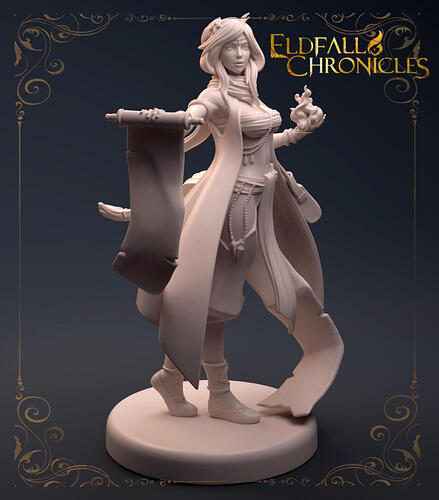 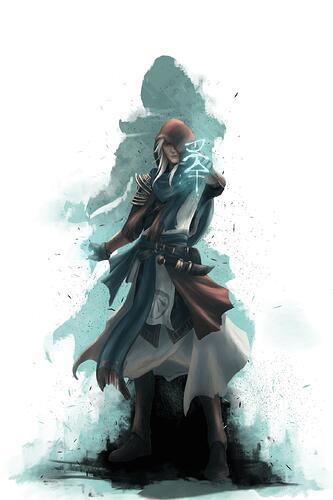 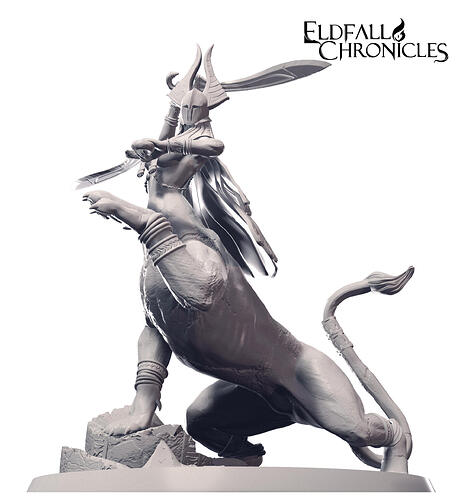 This week’s Design Notes are up on our webpage! This was one of our very first designs

The faction is largely aesthetically inspired by the ancient Greece, combined with the aesthetic sense of many other cultures, predominantly medieval European and Arabic. And the most obvious: they are inspired by elven/fae folklore. As their lore suggests, they are at the same time very organized and orderly, while at the same time naturalistic. Because of their faith, they prefer to implement brighter colors. Helrin have an affinity to fire, due to their allegiance with the Sun goddess and due to the sun-lit environment they live in. Hence, most of the population can wield fire. Some however, can wield other elements, one being the unit I want to talk about.

Today, as a contrast to the last design process we published, I would like to present to you the design process of a unit from the Helian League faction: The Expeditionary Hierophant. (Check out her profile for more sculpt images)

A hierophant is an interpreter of sacred mysteries and arcane principles. In the game, her role is that of a healer and a potential leader of the Helrin party, that travels alongside the Helrin Expeditionary Force in pursuit of new discoveries, adventures and expansion. She is blessed by the patron goddess of the Helrin, Hyperia. While she is not expected to lead from the vanguard, she can cause more than enough trouble for the opposite side with her divine spells. Not to mention that she is singlehandedly capable of keeping your units up and fighting, while the number of enemies keep dropping.

We tried to portray her according to this role. As she is not expected to absorb the full force of the enemy offensive, her armor is not fully encompassing her. However, it denotes her status and should give her very good protection.

Her forearms and shins are covered with metal vambraces and greaves, which are at the same time protecting and decorating her. Her torso is protected by a cuirass made of 2 segments; the lower one that protects the abdomen and the upper one that protects the chest. Like with real armors, her cuirass reaches to about the navel, as to not inhibit mobility. The rest of her lower torso is protected by faulds, or in this case just one fauld (armored skirt). The rest of the body is protected by stylishly-tailored padding (gambeson), which should do well enough against any light slashes and impacts. Her head is currently exposed (mainly due to aesthetical reasons), but she might as well wear a helmet or armored hood in a life-threatening situation.

(At some point in the past, Rin were introduced to and adopted plate armor (I’m not yet telling from whom!). However, as they lack certain technology, their armor might not be entirely on-par with what we now know as a full plate harness (it is more segmented than Earth’s 14th, 15thcentury plate armor). Nevertheless, what they might be lacking in metallurgical technology, they make up for in craftsmanship, as each of their armors is a work of art and is made to perfectly fit the wearer.

An important point is that aesthetics play a major role in the Rin cultures. Similar to the customs of our own world, where armor often emphasizes the wearer’s anatomy, the Rin also tend to make armor in a way that it flatters the body and the style of its wearer. In the case of this particular model, the armor is made in a way to show her feminine grace. However, since she is an expeditionary hierophant, someone who is on the road a lot, practicality and effectiveness had to be considered.)

Finally, she carries a staff, embedded with a mana stone, to assist her with the channeling of mana.

An important note: usually, the flow of mana through one’s body is impeded by armor and multiple layers of clothing (this is why arcanists seldomly fully garb themselves). But in the case of divine mana, which the Hierophant uses, the intensity of mana is mostly dependent upon one’s zeal and faith – it seems to manifest within. Another fact is that Helrin are capable of crafting enchanted metals with unique conductive properties – something that is hard to find elsewhere.

Concept design notes sent to the 3D artist prior to sculpting

She was the first digital drawing I did, so her art has lots of space for improvement.

Our sculptor, on the other hand, did a tremendously wonderful work with her in my opinion! I think he captured her grace and leadership very nicely!

This would be all for this entry, thank you for reading. Have a nice week!

A memory of the times we could playtest irl

Now we’re playtesting online, and actually, very soon, we will announce a crashtesting/playtesting group! We are very confident in the game we created, but it needs to be balance-tested by as many people as possible! 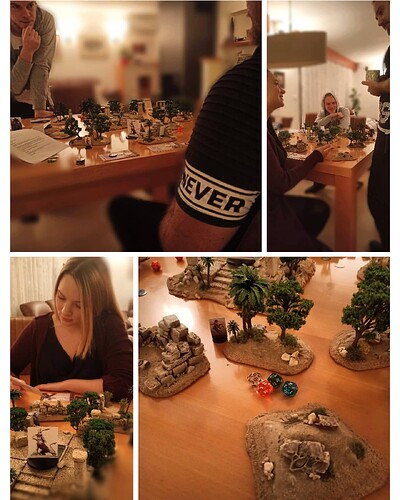 Tomorrow we reveal another unit from the Thenian 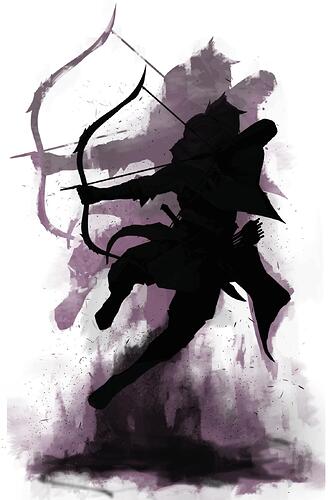 “When you start to suspect that Thenian hunters might be onto you, you’ve been in their grasp for hours…”

Check out their description! https://eldfall-chronicles.com/rangers-guild-hunter/

Miniature sculpted with love by: https://www.artstation.com/laca_sette 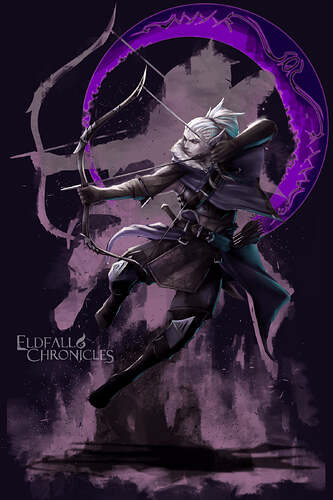 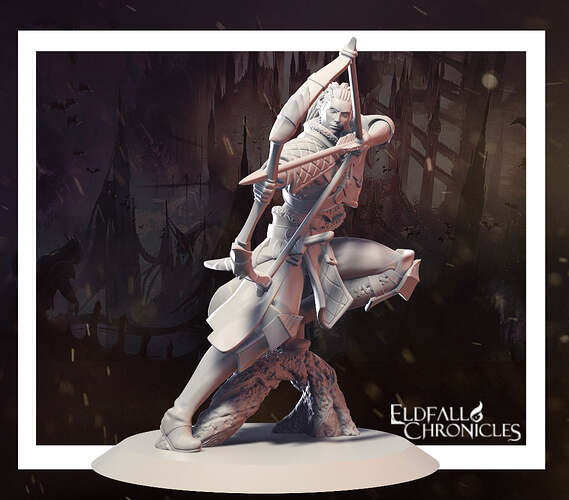 Check out today’s article on magic in the world!

Weaving magic into the setting and gameplay is one of our favorite parts!

In the article, we talk a bit about the lore and the magical elements, which greatly impact the gameplay! The next part comes soon, in which we will talk more about where mana comes from and how it affects nature and people. Also, a detailed look into gameplay will follow!