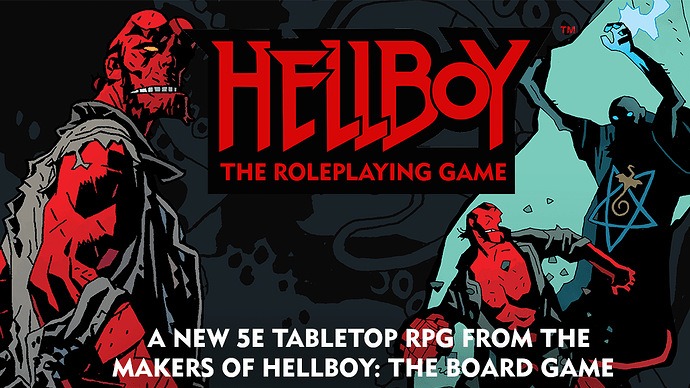 Coming to Kickstarter August 19th. Create your agent and join the B.P.R.D.

A brand-new Hellboy roleplaying experience, based on the visionary Hellboy graphic novels by Mike Mignola and powered by 5th Edition.

Phew. I backed Mantic Games and Red Scar’s Hellboy RPG on Kickstarter and am pleased with the output. 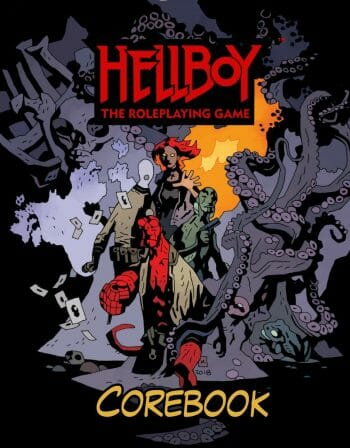 I’m a big Hellboy fan; I liked even the last movie, despite its flaws. While this is a review of the PDF edition, I have a Collector’s Edition Book due to my supporters’ tier scheduled to arrive next month.

My fear was that this RPG wouldn’t feel like Hellboy. It does. It doesn’t feel like Dungeons & Dragons’ 5th edition, though. One new rule is responsible for that, and we’ll get on to that gamer changer in just a bit.

I want first to say that while I’m giving the Hellboy RPG the thumbs up that I feel this title could have had, perhaps should have had, two thumbs.

Hellboy isn’t just great storytelling, it’s a visual treat from Mike Mignola, and there is surprisingly little art in the book given that. I’m not saying Hellboy is light on art. I’m saying there should have been more.

There are no hero images. Some chapters begin with a full-page illustration, but all other art fits perfectly across the two-column layout. There are no images with curves, no close-ups of the delightful horrors from Mignola’s mind. Most frustratingly, the bestiary isn’t fully illustrated. Given that each monster has been drawn already, their omission is disappointing.

I said that this 5e-powered RPG doesn’t feel like D&D. That’s not because of the modern setting, the swapping of experience points with milestones or Robert Schwalb’s initiative system.

The difference is due to the Doom and Ingenuity rules.

Any time a player character makes an ability check, attack roll, saving throw, or has an outcome decided by the roll of a d20, the player also rolls a single d10.

That’s the rule. Hellboy feels different in your hand to D&D. The dice are different. Each time you roll, there’s a %10 chance of scoring either a Doom or Ingeunity point.

When you have Ingeunity points, you can use them on rerolls, reduce damage, boost initiative, stabilise creatures, and activate powers. When you earn an Ingenuity point, you have the option of saving it or using it straight away, and the choice you make then also matters. Furthermore, these dice explode, values adding and stacking to create some spectacular in-game moments.

Doom, a concept appropriate to Hellboy, is nearly the opposite and works against the PCs. Doom doesn’t always come from dice. The advancing plot can generate it or when characters spend 10 minutes extra to be thorough. For example, if 3 agents spend 10 additional minutes searching a room for clues, just to make sure, that generates 3 Doom. It’s a rule that encourages players to take Hellboy-like decisive action. 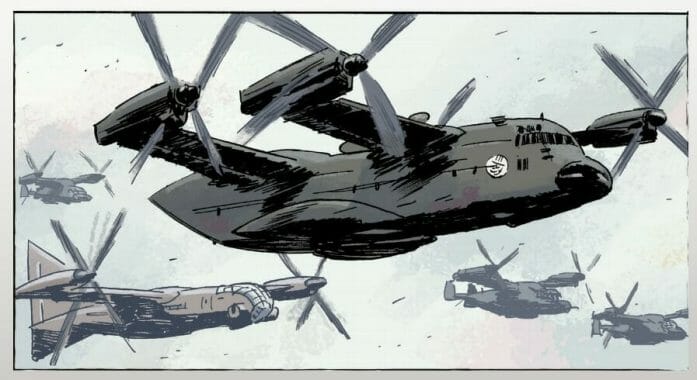 There’s one other set of rules that, while not as remarkable as Ingenuity and Doom, also have a noticeable impact on the feel of the Hellboy gameplay. Those rules are for Backup Agents.

In Hellboy, PCs are part (if only by assignment) of the B.P.R.D, and the B.P.R.D. has resources to help. In a game where a phone call can summon support before the climactic scene against the big bad, rules for backup are welcomed.

It feels harsh, but much of the rest of the rules are the expected reskinning of D&D 5e for a contemporary setting. Classes become Roles, Races become Origins, and we get Feat, Equipment and Skills as appropriate.

You do need a copy of the Players Guide to fill in the blanks. 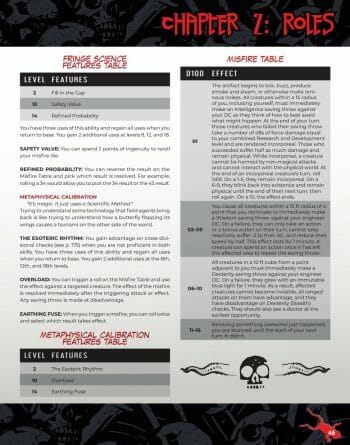 You’ve read my grumble about art, but mostly the layout is fine.

The same is true with the flow and structure. The order makes sense, starting with character generation, flowing then into the changes, the basics of the fifth edition, the new rules, combat, how to run a game, magic, monsters and then a sample adventure.

The font is clear and easy to read. There’s no chance of getting lost in weird sub-page divides. However, I do wish the headings were more clearly delimited from the sub-headings in the Origins chapter. At times, and maybe this is just because I’m stupid, it wasn’t immediately clear whether I was reading a new Origin type or a sub-type. For example, Demons are a classification within The Cursed Origin, not their own standout. 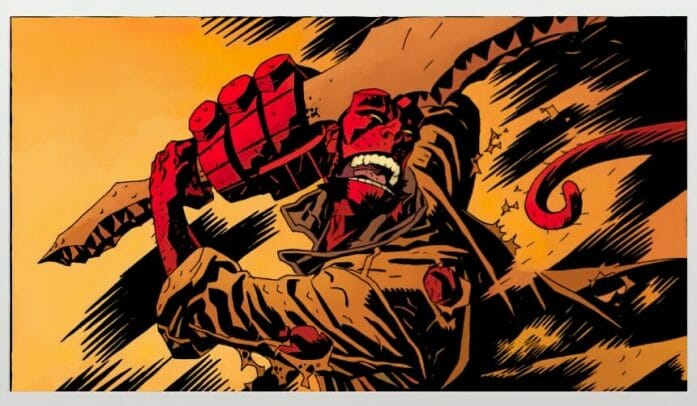 Importantly, the writing team know and get Hellboy.

I was surprised to get a multi-page introductory essay at the start of this RPG. I don’t even know if it’s necessary. But I enjoyed it.

If I was the teacher who had handed out the assignment to discuss the Hellboy-verse then I’d be using the green marker pen and putting ticks of agreement all over it.

There are Nazis in the Hellboy-verse. Heck, Hellboy himself was summoned by them. While there are obviously shades of grey here (a demon fighting for humanity?) Mantic and Red Scar are refreshingly, amazingly, upfront and accurate about Nazis.

My favourite sidebar in the whole RPG says; 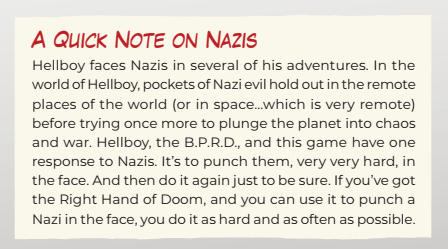 Hellboy faces Nazis in several of his adventures. In the world of Hellboy, pockets of Nazi evil hold out in the remote places of the world (or in space…which is very remote) before trying once more to plunge the planet into chaos and war. Hellboy, the B.P.R.D., and this game have one response to Nazis. It’s to punch them, very very hard, in the face. And then do it again just to be sure. If you’ve got the Right Hand of Doom, and you can use it to punch a Nazi in the face, you do it as hard and as often as possible.

Yes, it’s a Fifth edition powered Hellboy RPG. No, it doesn’t feel like D&D at all. Not to me, anyway.

Most things would benefit from more Mike Mignola art. It’s a shame that we don’t get more of it here. A Hellboy RPG that also doubled up as an effective bestiary of Mignola-monsters would have been an absolute treasure.

I recommend the Hellboy RPG to everyone except 5e haters.

While I’ll defend the statement “it doesn’t feel like D&D at all”, I don’t think even the Right Hand of Doom is enough to persuade people who dislike 5e because it’s 5e that this game is any different.

Otherwise, I think the Hellboy RPG is an excellent purchase for any Hellboy fan. I think it’s an incredibly compelling purchase for anyone who’s come into RPGs via 5e and are cautious but willing about branching out to new systems.

However, Hellboy isn’t out yet. The quickstart is available, but we’ll have to wait for the core books to hit stores, even in PDF form.