Perseverance: Castaway Chronicles is a euro-style dice-drafting / dice-placement game featuring player-constructed worker placement areas and hex-based exploration and adventuring. The game consists of five episodes, telling the story of a group of survivors becoming a mighty civilization on a hostile island. The theme unfolds through narrative elements, as well as evolving game mechanisms. The episodes are playable as standalone games with various lengths and complexities, but also as a continuous story. The outcome of each episode influences the next, but the game has no legacy elements and no hidden rules; the whole storyline is infinitely replayable.

As the spotlight of our October newsletter, we are incredibly excited to introduce you to our next major project, Perseverance: Castaway Chronicles! 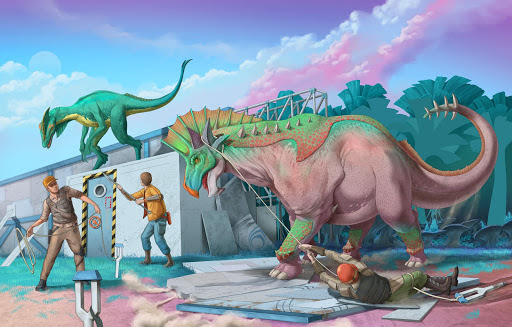 Over the past months, we’ve been dripping information about the game on various forums, but now the time has come to share the details of the product concept, as well as reveal the timeframe for the Kickstarter campaign!

Perseverance: Castaway Chronicles is a series of dice placement/dice drafting games featuring episodic storytelling through evolving game mechanisms. The series will be unfolding the story of shipwrecked survivors on a mysterious dinosaur island, slowly developing into a mighty civilization.

As you would expect from an episodic game, Perseverance will have a fully replayable campaign with a narrative arch, where the outcome of each game influences the next. What makes the concept truly one-of-a-kind is that each episode is also a standalone, deep strategy game in its own right, with unique mechanisms evolving from the previous episodes, making each successive episode easier to learn and teach. Each Episode is also playable on its own, outside of the campaign. 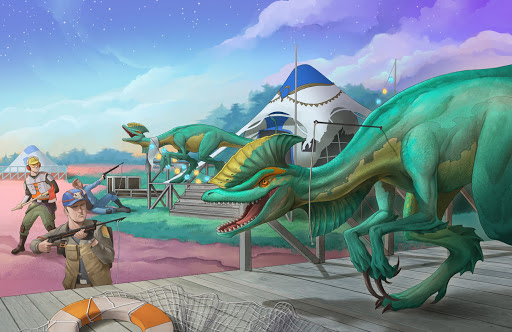 🦖 In Episode 1, a modern-day ocean liner gets caught in an eldritch storm, drifting ashore on an otherworldly dinosaur island. With no way to contact the outside world, players embody four aspiring leaders who, following the guidance of the ship’s senior officers, volunteer to establish a foothold on the island, settling down and organizing the survivors. Competing with each other but also collaborating to protect the early settlement from the relentless dinosaur attacks, players strive to gather the most followers and become a force to be reckoned with in this newborn community.

🦕 In Episode 2, time has gone by since the shipwreck. The survivors managed to settle down and thwart the dinosaur attacks against the developing city, but now they face an even greater challenge. The growing community forces players to expand beyond their secure borders to find and protect new outposts. Life in the city is changing drastically, and so does the community's interaction with the dinosaurs. The episode ends with a discovery on the island that will change the lives of the survivors forever...

The entire Perseverance saga will consist of 4 Episodes, and each one of them will be comparable in depth and content to our previously released games. Due to the sheer scope of the project, we will be running two Kickstarters for it - the first one, featuring Episodes 1 and 2, will launch Spring 2020.

We will reveal more about Episodes 1 and 2 and start teasing the other two as we are getting closer to the Kickstarter date. We will also launch a designer diary blog section on BGG and our brand new website later this year, where you can get a more in-depth look at the saga’s design and development process.

And finally, the first episode of the saga will be demoed for the first time at Essen (booth 2-F142) - if you are attending, join us for a game!