Just as in the video game, in Resident Evil: The Board Game players will take on the role of members of the Special Tactics and Rescue Service (STARS) who wind up stranded in a mysterious mansion filled with deadly monsters. The cooperative game will include both combat and exploration. The Resident Evil board game will use the same sort of activation and combat mechanics as Resident Evil 2 and Resident Evil 3. But, instead of prescribed scenarios, players will be exploring a randomized version of the video game’s iconic mansion — sort of like a more thematic, more tactical version of the Avalon Hill classic Betrayal at House on the Hill.

In [the] Resident Evil [board game], you kind of have a very small starting area, and you have doors that lead off of that,” designer Sherwin Matthews told Polygon. “You don’t know what’s behind them. When you get there, you draw an exploration card, and then that populates the next few tiles you may have found. So you really never know exactly what’s waiting around the corner, in terms of both enemies and also exploring out the map.

Additionally, as players rescue various STARS members, those characters won’t just stand idly in the main hallway like they do in the video game. Instead, Steamforged has fully automated their behaviors. They might go out on missions of their own, scavenge for supplies, or try to secure an alternate escape route for the larger team.

The crowdfunding campaign will include an optional retro pack, which will replace components in the base game with art and assets inspired by the original 1996 classic. There will also be two gameplay expansions revealed when the campaign launches, each one with much larger boss miniatures to contend with — not unlike those seen in expansions to Dark Souls: The Board Game and Horizon Zero Dawn - The Board Game. Additional stretch goals will also unlock based on community feedback, through what Steamforged is calling a “choice-driven” campaign. 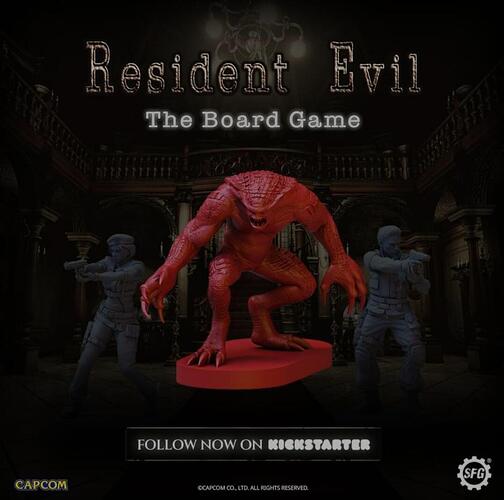 Hey, Survivors! The news has broken and, like a virus, it’s already spreading:

Resident Evil: The Board Game is coming to Kickstarter on October 26 this year, with a campaign unlike anything you’ve seen before — our first ever open world Kickstarter campaign!

That’s right. To celebrate the 25th anniversary of the first Resident Evil video game, our love for this incredible series, and the awesome (and growing!) tabletop Resident Evil community, we’re turning the campaign itself into a survival horror experience.

But wait — what does ‘open world Kickstarter’ actually mean? (And how did we let Sherwin convince us to do it?!)

(Don’t miss the launch! Follow Resident Evil: The Board Game on Kickstarter now)

Exploring the Spencer Mansion on Kickstarter

Before I get started, a special thank you to everyone in our awesome community. Your enthusiasm for the project already has us blown away. When we first started this crazy ride, I knew you’d be all over a Resident Evil board game, but even so…

We’ve got several blogs planned in the coming weeks that will give you insight into what’s in store for you in Resident Evil: The Board Game. But to kick things off, let’s start by discussing what I think is one of the most exciting and ambitious Kickstarter campaigns we’ve ever attempted, or even seen.

What am I talking about? Well, friends, we’re going to explore the Spencer Mansion together in our first ever open world Kickstarter campaign.

Intrigued? Well then, read on…

Unlocking Goals by Exploring: How it Works

Most Kickstarter campaigns (such as those for the Resident Evil 2 and Resident Evil 3 board games) operate with a system of stretch goals, which are unlocked when funding reaches a certain level.

Resident Evil still has plenty of stretch goals (more than ever before, in fact!) but instead, these are unlocked as Kickstarter backers explore the mansion.

At the start of the campaign, we’ll provide you with a piece of narrative which many of you will find all-too-familiar… 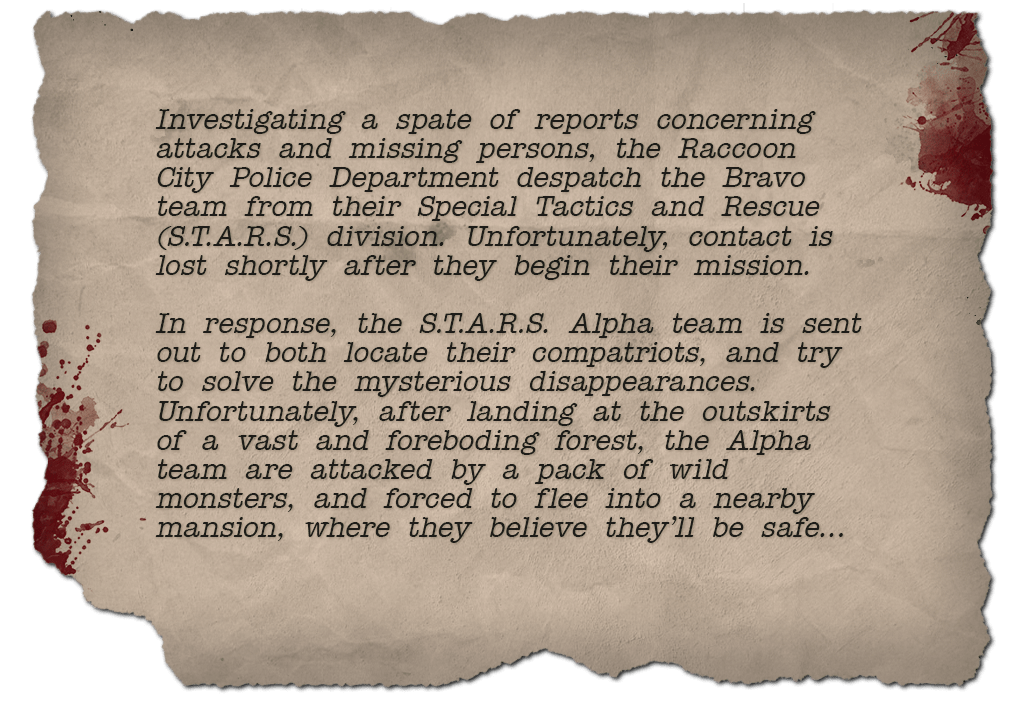 This is where your journey begins, as you take your first steps inside the mansion. And, if you back the campaign on Kickstarter, where we go next will be up to you.

You’ll be given a choice to vote on. Will you investigate the dining room? Or perhaps head straight upstairs, following the footsteps you heard overhead?

The next day, the most popular choice will be revealed and we’ll head in that direction — and whatever we encounter there, be it enemies or missing S.T.A.R.S. members, will be added to your pledge as a stretch goal!

This will continue every day of the campaign, as we make our way through the Spencer Mansion and add incredible value to your pledge in the process with tonnes of new gameplay content.

With us so far? Great. Because here’s where things get even more interesting.

Who Will You Save? Unlocking Advanced Characters

At the start of the Kickstarter campaign, every S.T.A.R.S. character will still be alive, either exploring or hiding somewhere in the mansion. 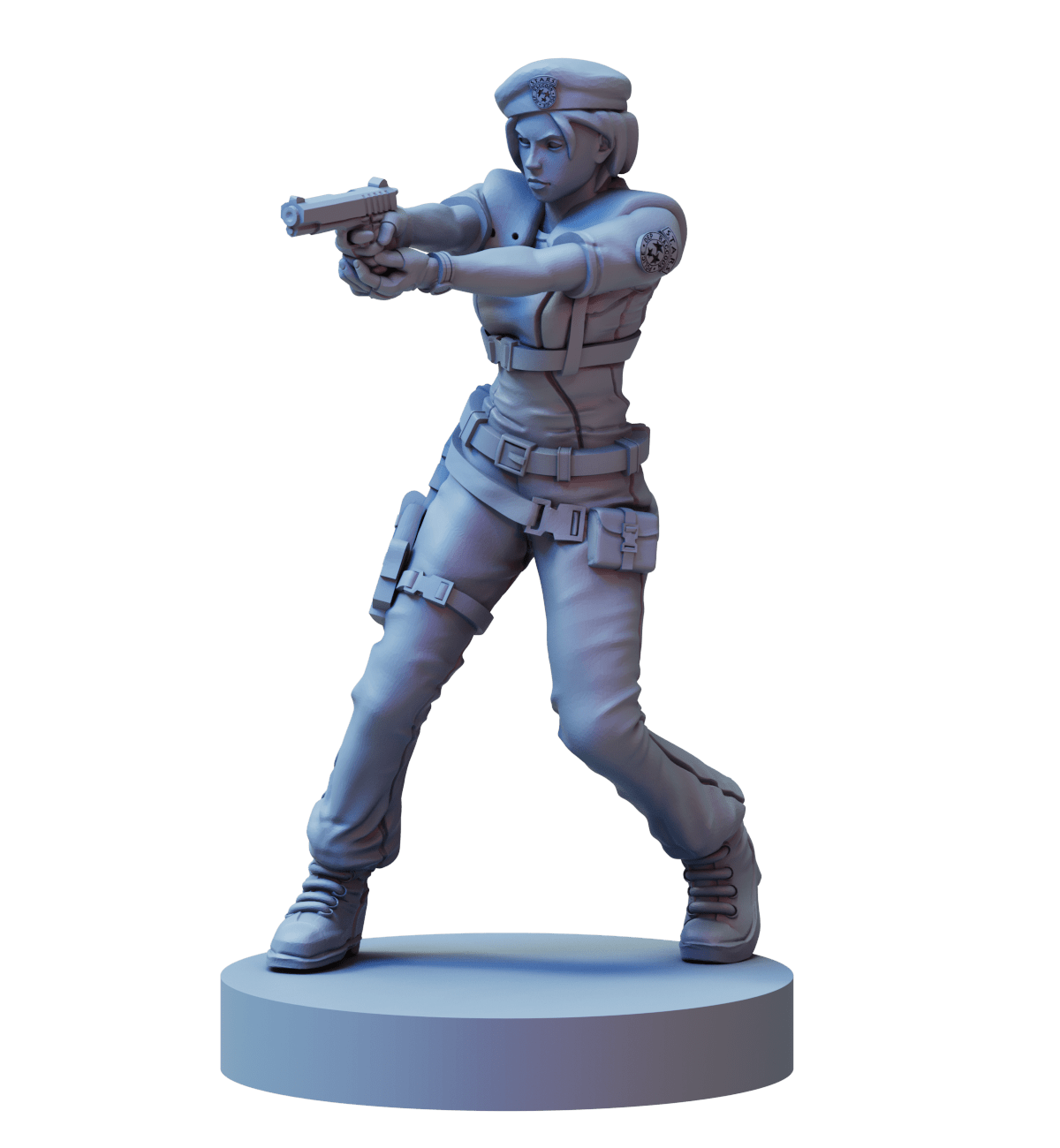 « There are only three S.T.A.R.S. members left now. Captain Wesker, Barry, and myself. We don’t know where Chris is… »

It will be up to you to find and rescue them in time, by picking up on clues in the narrative. Ignore that emergency radio call or those screams for too long, and your ally will be a mere shadow of their former self by the time you arrive.

Mechanically speaking, they’ll still be added as a survivor character to your pledge. So, you won’t be missing out on any characters. (Or any enemies, for that matter!) 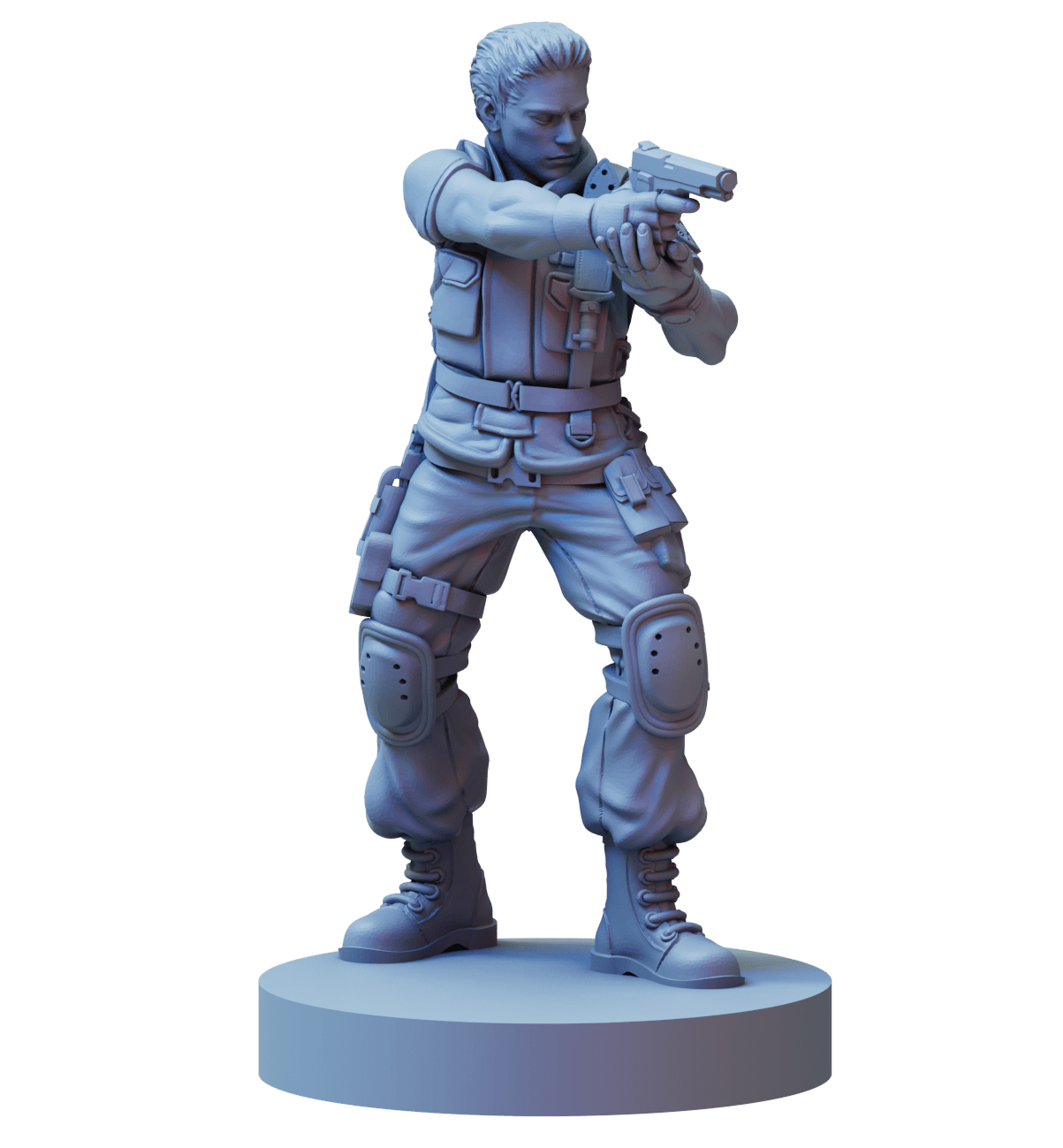 But Resident Evil is a game of meaningful decisions, and the decisions you make in the Kickstarter campaign will affect who survives the night… to become an Advanced Character!

Yes, at several points during your exploration, you’ll have to make a decision on who lives and who dies. Saving a character will unlock their advanced version, which will be added to your pledge. 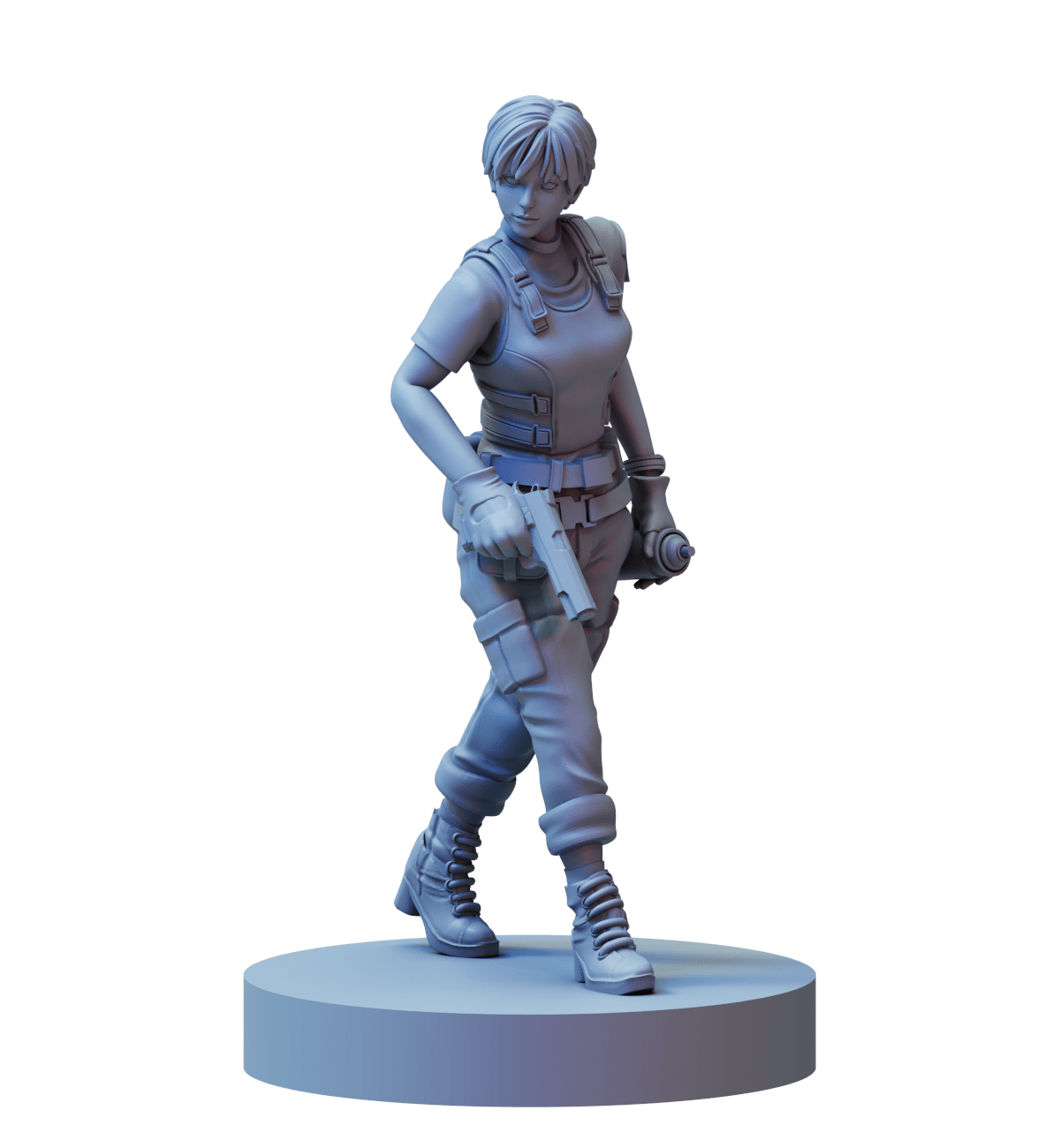 Every character will get a standard version, but only six will get advanced versions. So, you’ll want to find your favourites as soon as you can — not just to save them from an untimely narrative end, but to secure their advanced version for your game! 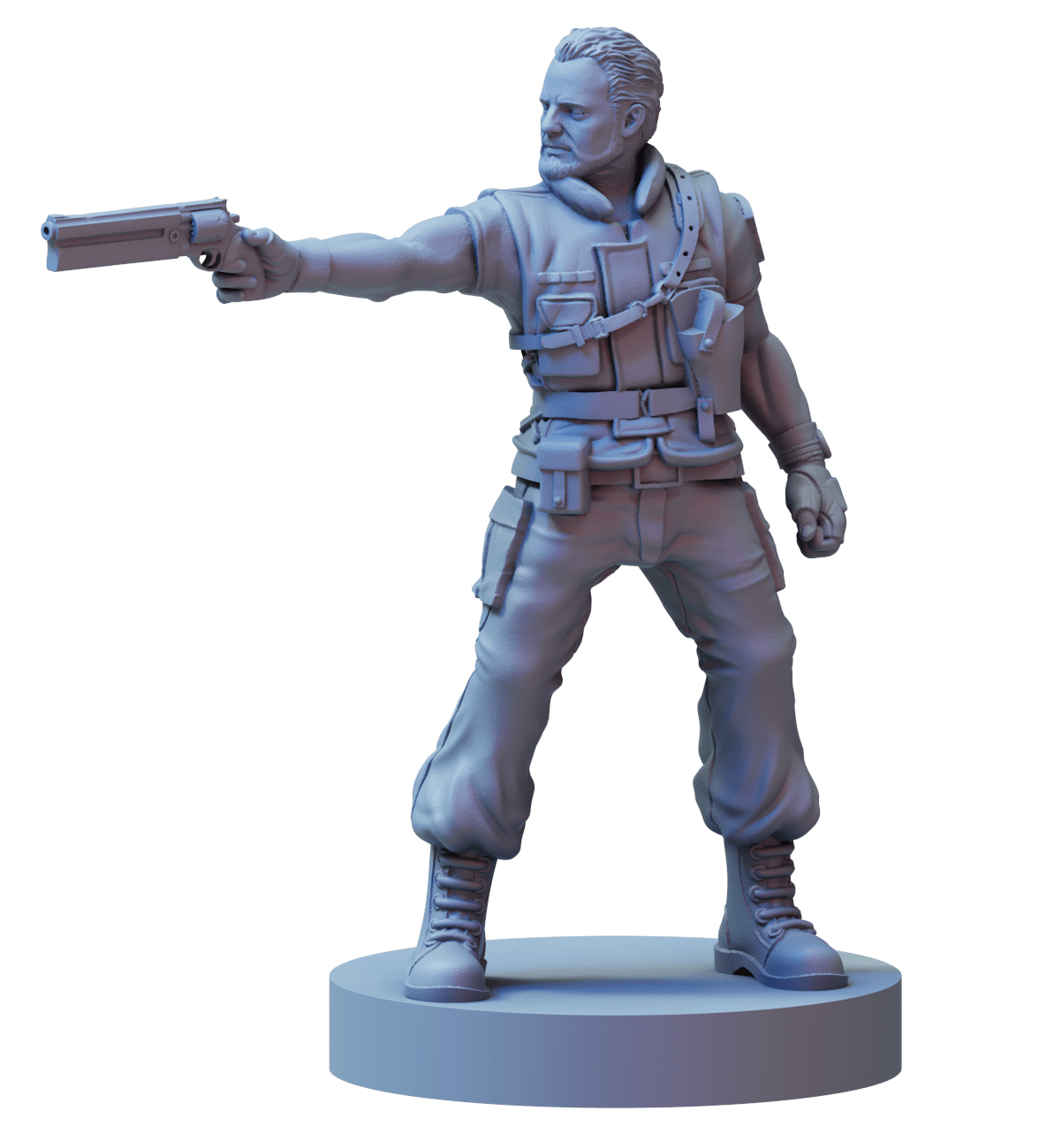 An advanced character is a version of a character that you can unlock while playing Resident Evil: The Board Game after hitting a certain achievement.

Advanced characters represent the character after a significant narrative event. We could, for example, see an advanced Joseph Frost that managed to fight off the Cerberus; an advanced Richard Aiken that escaped Yawn after all; or even an Advanced Wesker that… wait, Chynna-Blue will come after me if I tell you that.

Oh, and one more thing. Advanced characters will all have an alternative sculpt and a new player card with brand new rules!

So, Who Will You Save?

I hope you’re looking forward to the campaign as much as I am — it’s going to be an incredible journey that you’ll want to check back on every single day, with a narrative ending no one can possibly know…

Who will you try and save, other than Barry Burton? Let us know! You can find us on Facebook, Discord, and Twitter.

And if you’re not following the campaign already, go do that now. You won’t want to miss this… 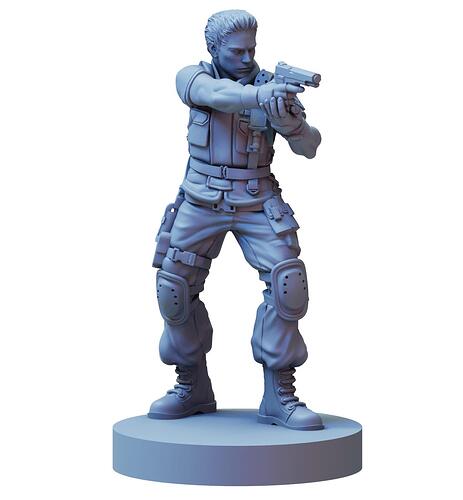 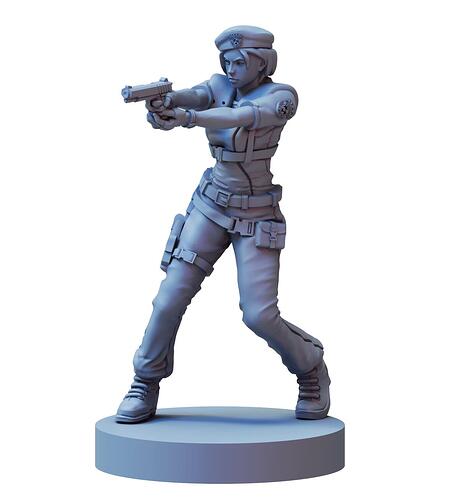