In this video we’ll be looking at the game board, the player-or character board with all its components, as well as the base game mechanics for Exploration, Construction, Discovery, and Extraction—or, mining.

In this tutorial we will see how light shield cards work. This will include: how they can increase and influence the characters’ possibilities and actions, how your supply of Umbra can be used, and some dynamics related to the citadel.

In this tutorial we will look at the shadow phase and how other advanced dynamics like corruption work. We’ll focus in particular on shadow IA and generation.

Before, I didn’t really know the meaning of this word. I didn’t imagine how immense, all-pervading, and truly horrifying it could be… because the more you flee from this darkness, the more you sink into it; like an endless vortex that overwhelms and consumes everything. It dulls our thoughts, crushes our souls, saps strength from the young, and renders the elderly silent. We can’t help but be terrified of the power that has robbed us of our planet. And yet, we still endure, we still resist. On what were the remains of one of our great metropolises, there now stands the Island of Light. Valiantly, with its three hundred meter high walls, it opposes the shadows. What is left of humanity has gathered here, to fight, to hope, or simply to brave it out until the end.

Today, I went upstairs with my son to look out on the horizon. It was cold and the wind blew relentlessly from the distant mountains. The darkness, seen from above, resembles a vast, boundless ocean that swallows light; quivering, as if it were alive. Somewhere down there, immense beings move among the remains of our cities, searching for the last survivors or small pockets of light that still persist in shining against the destruction.

My son hugs me, then turns and leans out over the walls as if he’s a lighthouse keeper on a cliff, barraged by a raging storm. The circle of light that surrounds our ramparts gleams dimly, like a strange technological magic. It dispels the shadows that try to penetrate our stronghold. No one really knows what their purpose is, if not to bring desolation and death to everything they encounter.
Two large sentinel mechs watch over the gates at the walls. They’re waiting for some wayfaring refugee but, for months now, no one’s so much as knocked at the gates of the citadel.Sometimes… I think we’re alone now.

So much time has passed since the day the sun shone on our earth… that I can’t even remember what its warmth felt like on my skin and, even less, the color it gave to everything. Explaining it to my son, I tell him that it was like the fire that warms us in the great furnaces of the island… but bigger, much bigger. He struggles to imagine it.
How I wish that one day he can see the sun, if even just for a moment, so that he may keep the memory of it as a flame that burns within. Perhaps when the great tower is complete, then it will be possible. Climbing up its thousands of steps, ascending beyond the void-like ocean that’s enveloped our planet. Aviators testify that our star, high up there somewhere, still endures. For now we can only resign ourselves to believing their words.

The Loss of the Moon

It all started about 20 years ago, in 2032, after contact with one of the mining bases on the dark side of the Moon was lost. No one could understand how it was possible for all communications to be interrupted. Nonetheless, every shipment that started from the logistic bases on the luminous side did not return, and every probe that was sent ceased to transmit. The dark side of the moon became the unknown place that had fascinated astronomers since ancient times.

Then, a few months later, the scar appeared. A thin set of murky lines could be seen forming just on the peripheral edge of the Moon. Every telescope in the world focused on it, while day after day it expanded, like a dark cancer, obscuring our once familiar satellite. Scientists from the evacuated bases who had seen it up close described it as a set of obsidian rivers that swallowed light, a shapeless mass like solid smoke that branched out in all directions; chaotic, evil.

The most incredible theories were born: there was talk of aliens, of failed experiments, quantum strings, and beings from other dimensions. In the end, though, nobody could understand the true nature of the black ocean. America, China, and Russia organized a series of independent missions to study it, but as soon as the robotic probes approached the Moon, every single contact ceased, as if they had never existed.

Thus, while the brightest minds worked to solve the mystery and the most fragile either fell into panic or the arms of religion, the dark mass continued to grow and proliferate. It seemed that the deep emptiness of space itself had decided to condense and engulf our satellite. By the end of 2032, the moon was an invisible, aphotic disk that obscured the cold, distant stars.

For a few months it remained like this, as if in stasis. Then, when everyone started to calm down, the worst began.

The Weeping of the Moon

There is an age-old legend telling of a time when the moon was dark and, frightened by the surrounding abyss, it wept. From its tears, the demons that populated the earth since time immemorial were born. This weeping continued until the sun, moved, decided to give the moon a part of its own light. The moon ceased its crying, but not before shedding one final tear made of light. This gave rise to the first humans, who defeated the demons… and took over the earth.

Somewhere in the middle of 2033, the Moon began to swell on the side facing earth and a pitch-like stream trickled down toward the land. Some thought the apocalypse had arrived, while others thought it was the demons coming down to earth- to take it back.
The great powers reacted with force. Dozens of antimatter missiles were launched in an attempt to repel these lunar tears. At first they worked, dispersing the tenebrous mass into space… but then the flow increased and it was clear that nothing could stop it.

I remember that day so clearly, when the flow touched the atmosphere of the earth. It was similar to when ink spills into a glass of water. The darkness began to contaminate the atmosphere, little by little, obscuring the sun and expanding across the earth like a black tsunami. I have never felt as much fear as I did that day, or perhaps, since that day I have only known that one.
The black tide was not water but it wasn’t gas either; it was something different, something no one had ever seen. More like a fog or turbid smoke capable of devouring you, of tearing your very life from you if you ended up in it. Only the light could keep it away, only a light allowed you to save yourself… but how could you ever escape from something that just kept getting stronger?

Those were terrible days. Millions died while the darkness became more and more dangerous. The nights were always longer and colder, and resources increasingly scarce. In less than a year the sun was completely obscured. Nations collapsed. Those who did not defeat the shadows suffered death from the ensuing chaos and sheer struggle to survive.There seemed to be no more hope for humanity.

The Island of Light

Humans are resilient creatures, you know… they’re adaptable and somehow manage to give their best in times of crisis. Indeed, in a way it was miraculous; all the divisions that had plagued our society for millennia were suddenly set aside and, with the latest resources available, the Island of Light was built. Our refuge against the shadows that now dominate the planet.

Light for us is everything. It’s what stems the tide of shadows, what allows us to warm ourselves, what feeds our machines, and brings life to our homes. There are about fifty thousand people in the citadel and, as far as I know, they are all that remains of humanity.

Each of them strives to survive and do their part in sustaining the Island of Light. Our resources are limited. We’ve built greenhouses to produce food and we extract fuel from an old mine discovered under the foundation of the citadel, but it’s not enough.

Periodically, scout groups are obliged to go out in search of spare parts or other fundamental resources that we’re not able to produce ourselves, all to ensure the survival of the citadel. Many do not return. Fewer and fewer people volunteer for expeditions. Soon we will have to draw lots or establish a mandatory system as, daily, our engineers are engaged in a countdown to when we reach depletion. You see, there’s always a need for new resources, if only to add another day of life to humanity.

Ours is a constant struggle against the dark and every day becomes more difficult.

We have been going on like this for years. These days of eternal night make it difficult to keep track of the passage of time. We understand the changing of seasons depending on how cold it is… God knows how many people we lost during the last terrible winter. Many were children.

These days most people think that the citadel is now at its end and take refuge in the virtual worlds of the subnet or lose themselves to alcohol in the slum taverns. Only the scouts haven’t lost their hope. Handfuls of them, teams of heroes, travel undeterred through the land of the night; resisting the cold, the attack of shadows, the terror that devours you, the infinite solitude…

Perhaps I am deluded… but I’m firmly convinced that it will be precisely this force, typical of human nature, that will determine our victory and that the day will soon come– yes, the day– when the light of these heroes will become the beacon that will lead all of us toward a new era.

The day will dawn… when we finally take back the earth. 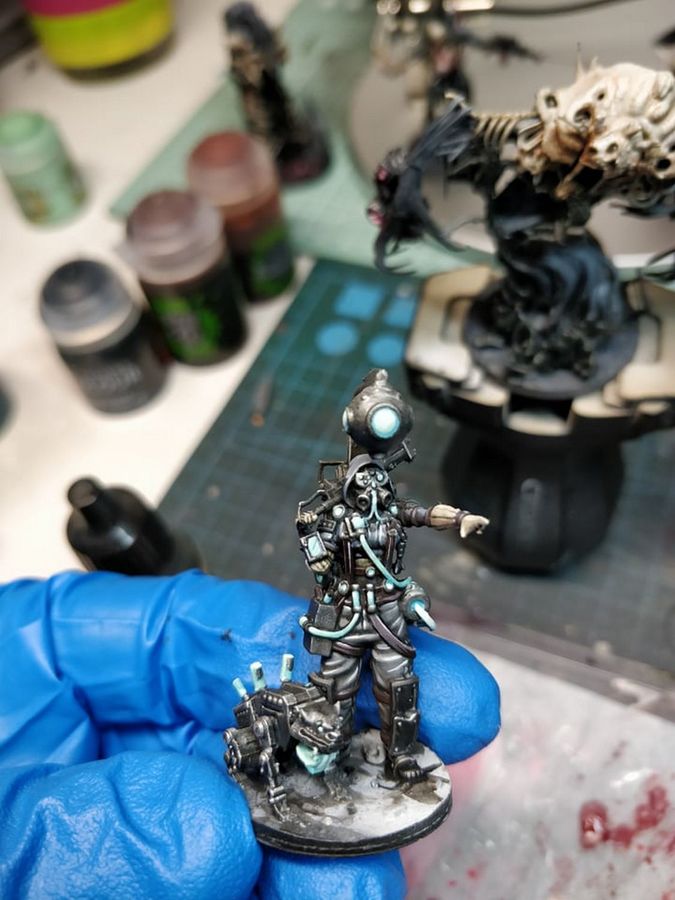 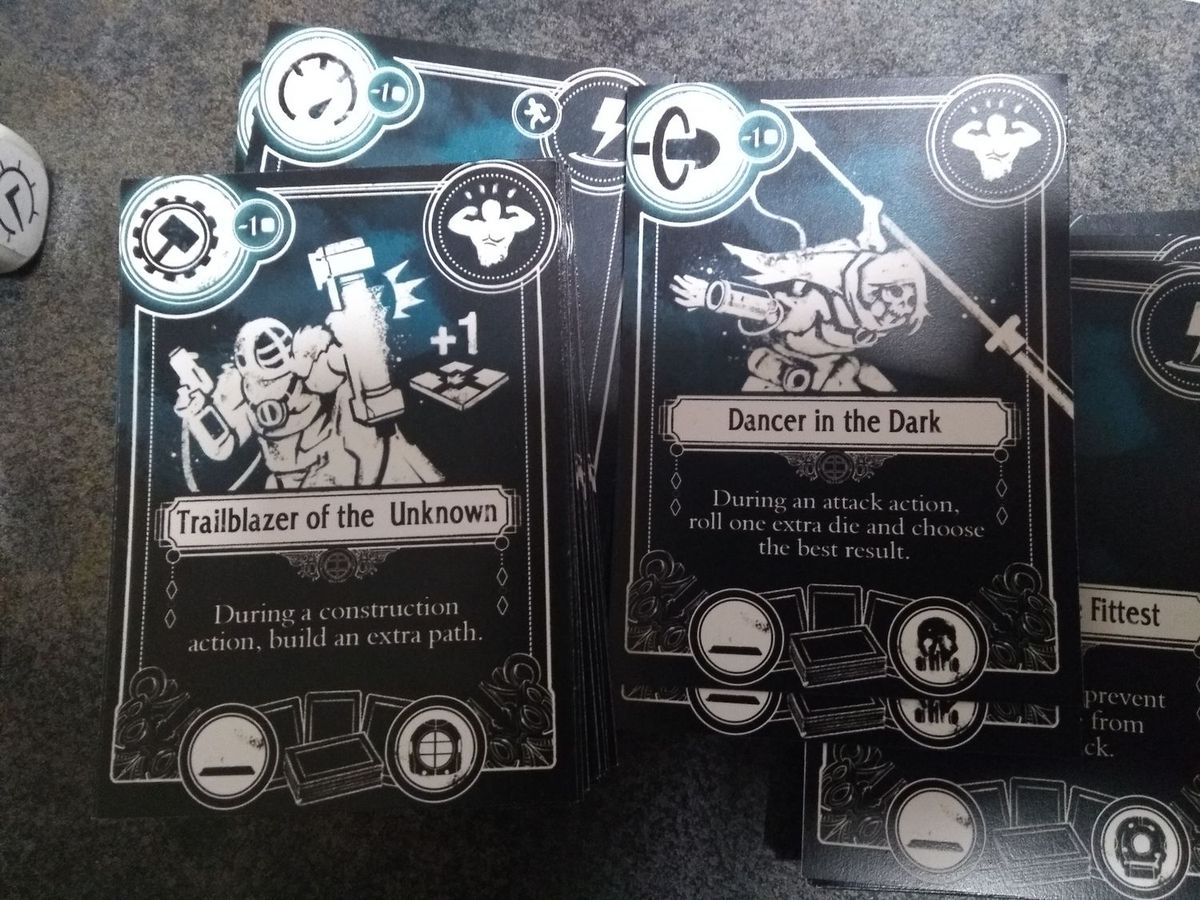 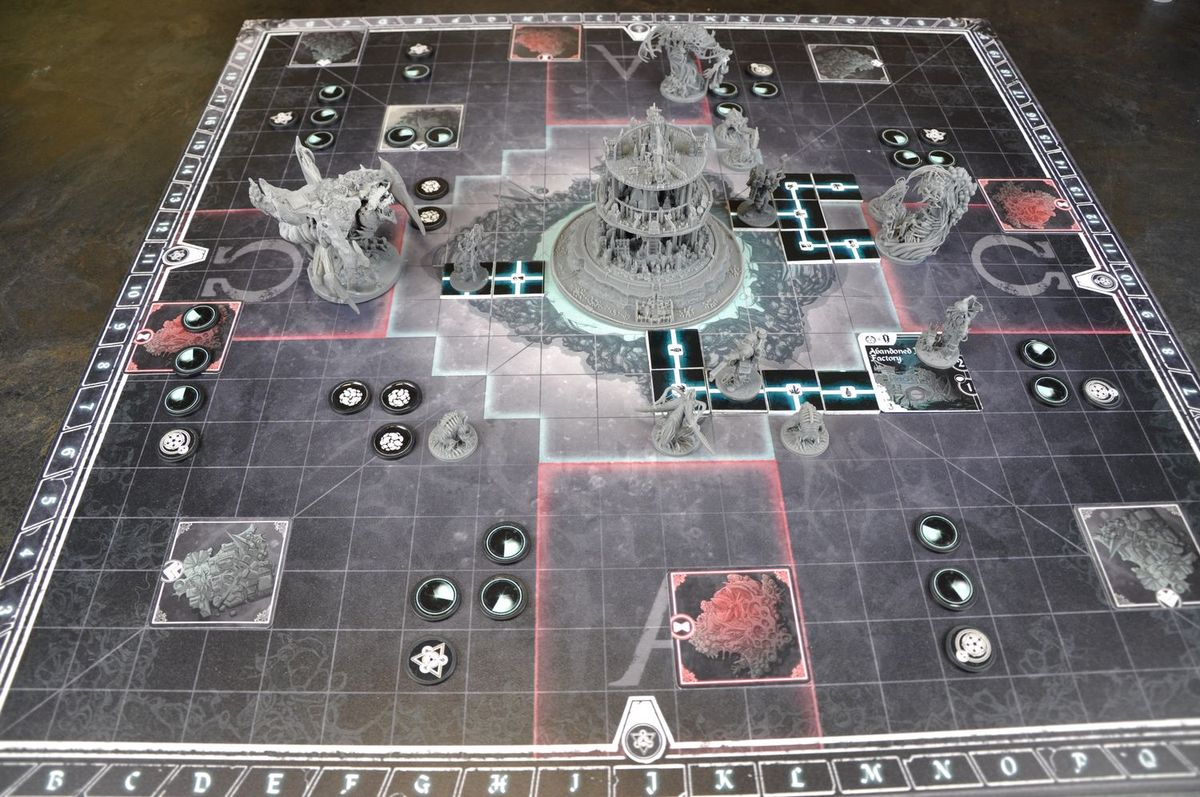 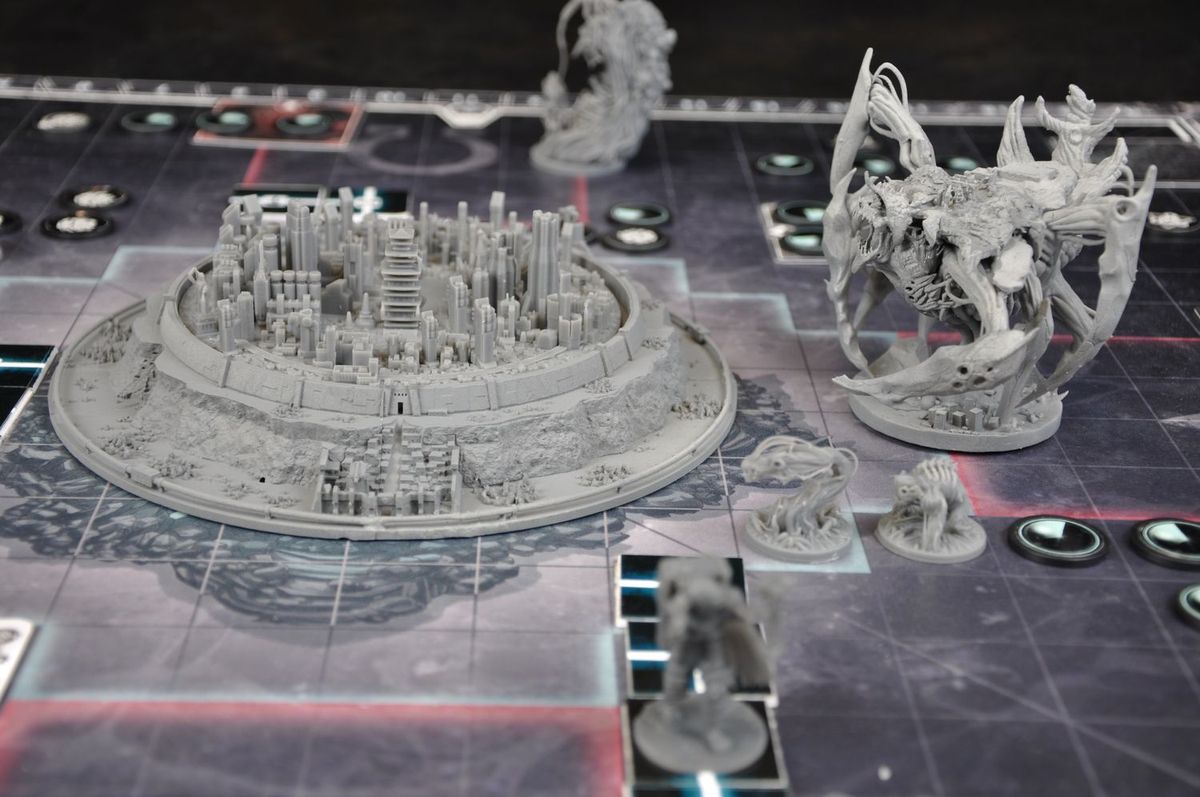 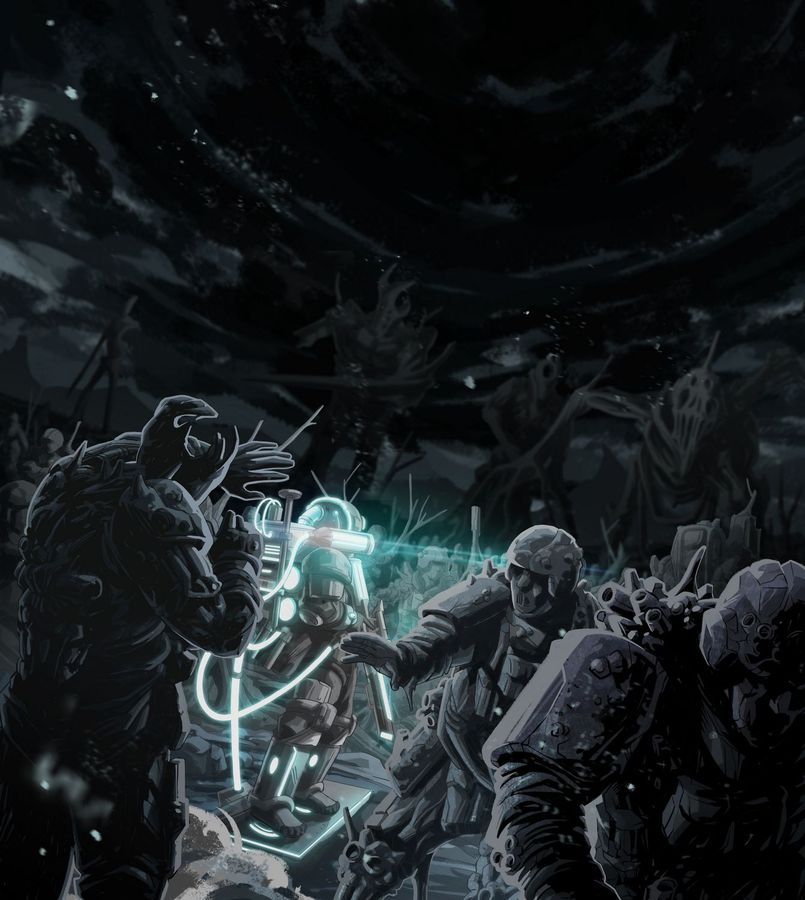 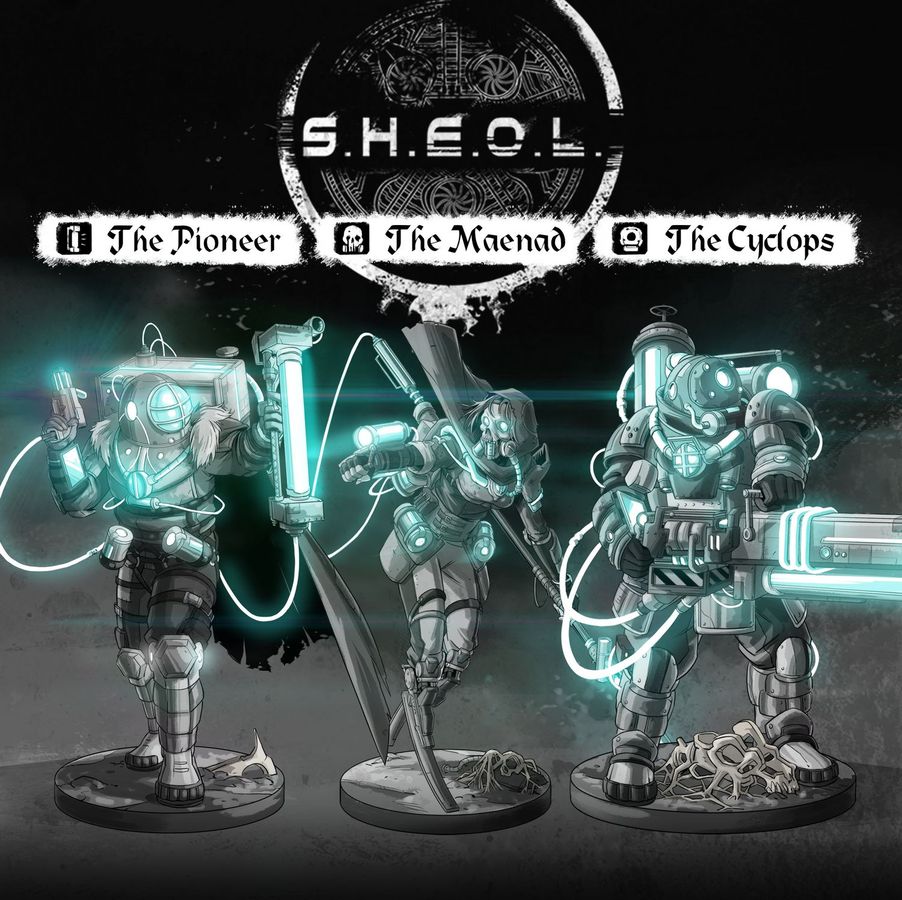 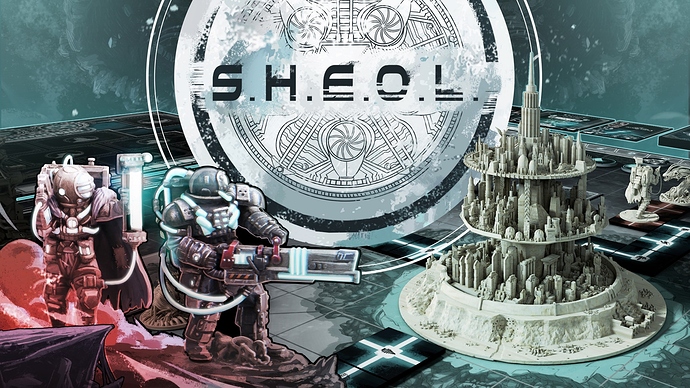 Sheol is a cooperative 1-4 player campaign game, set in a unique sci-fi world shrouded in an eternal night.

Despite this difficult time, we are working hard to bring Sheol to life! The preview copies are almost ready to be shipped. Here are some photos to show you Sheol prototype. 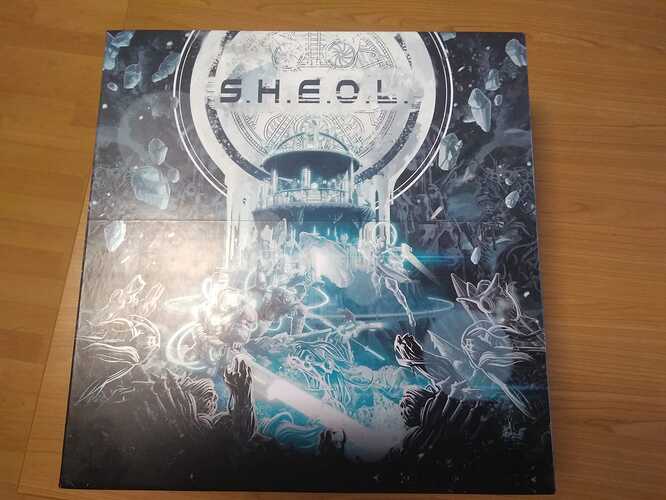 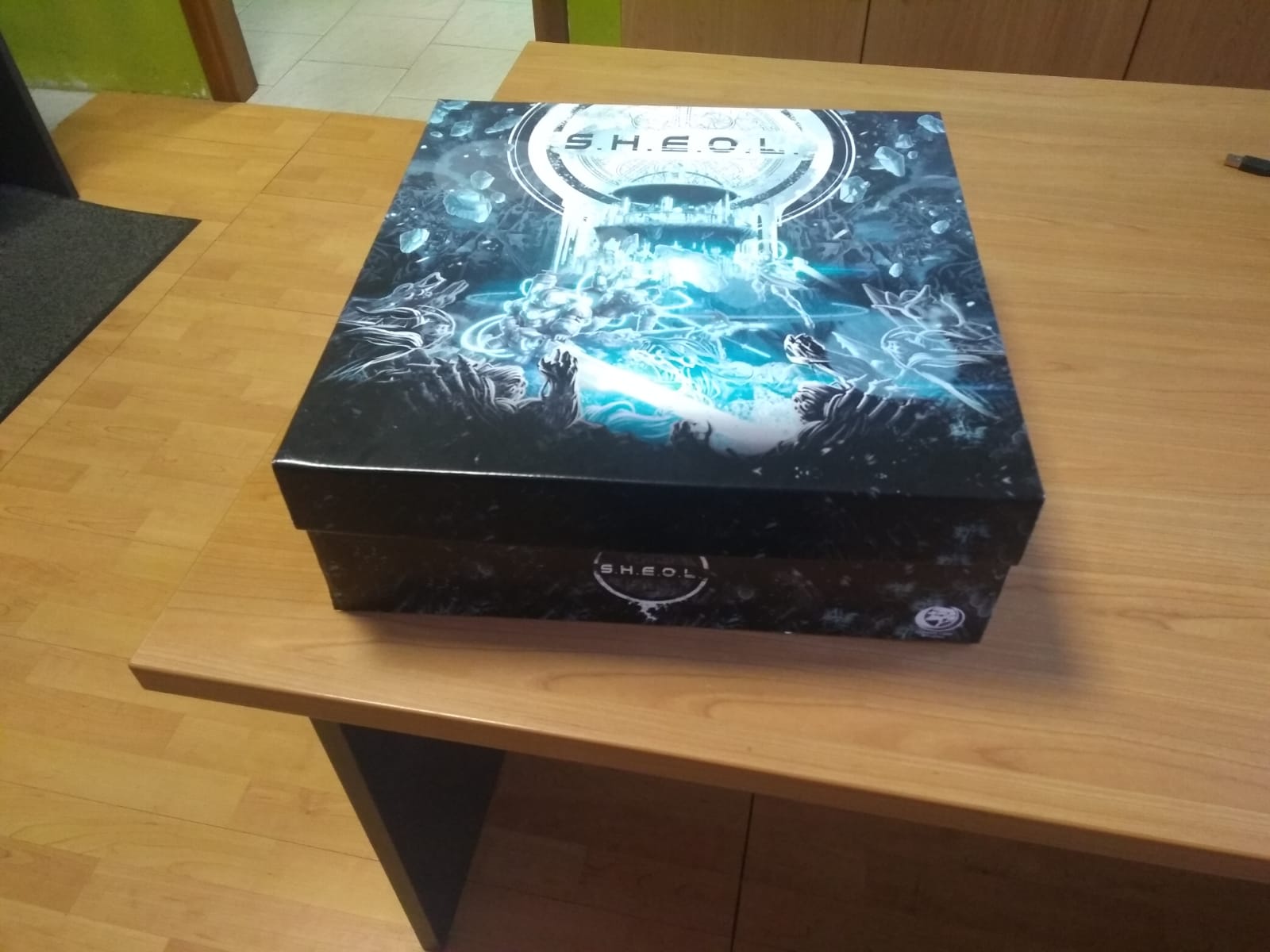 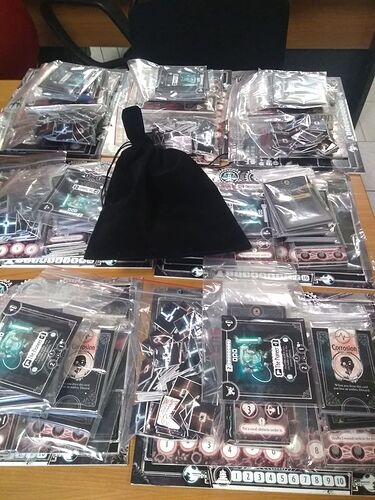 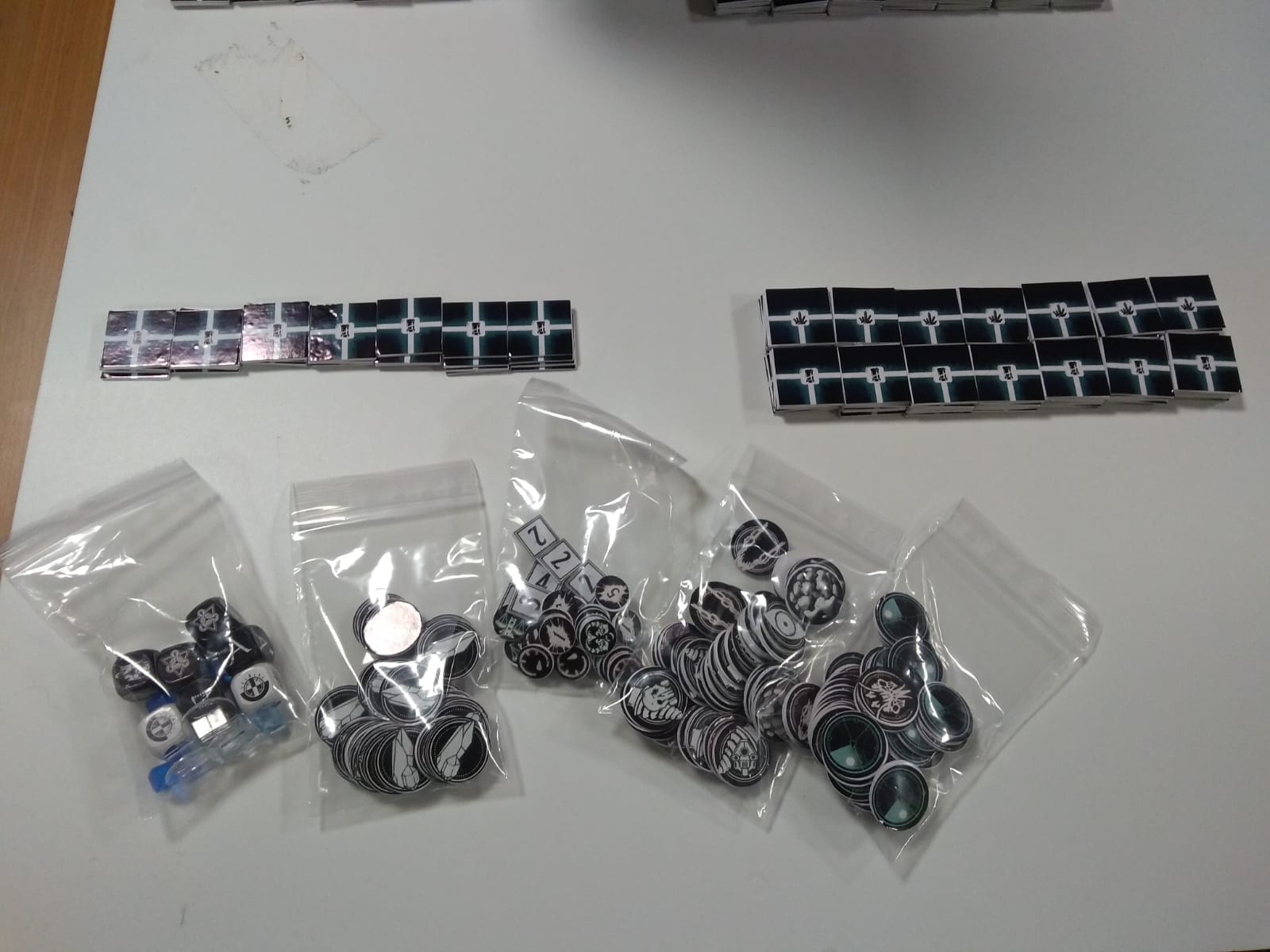 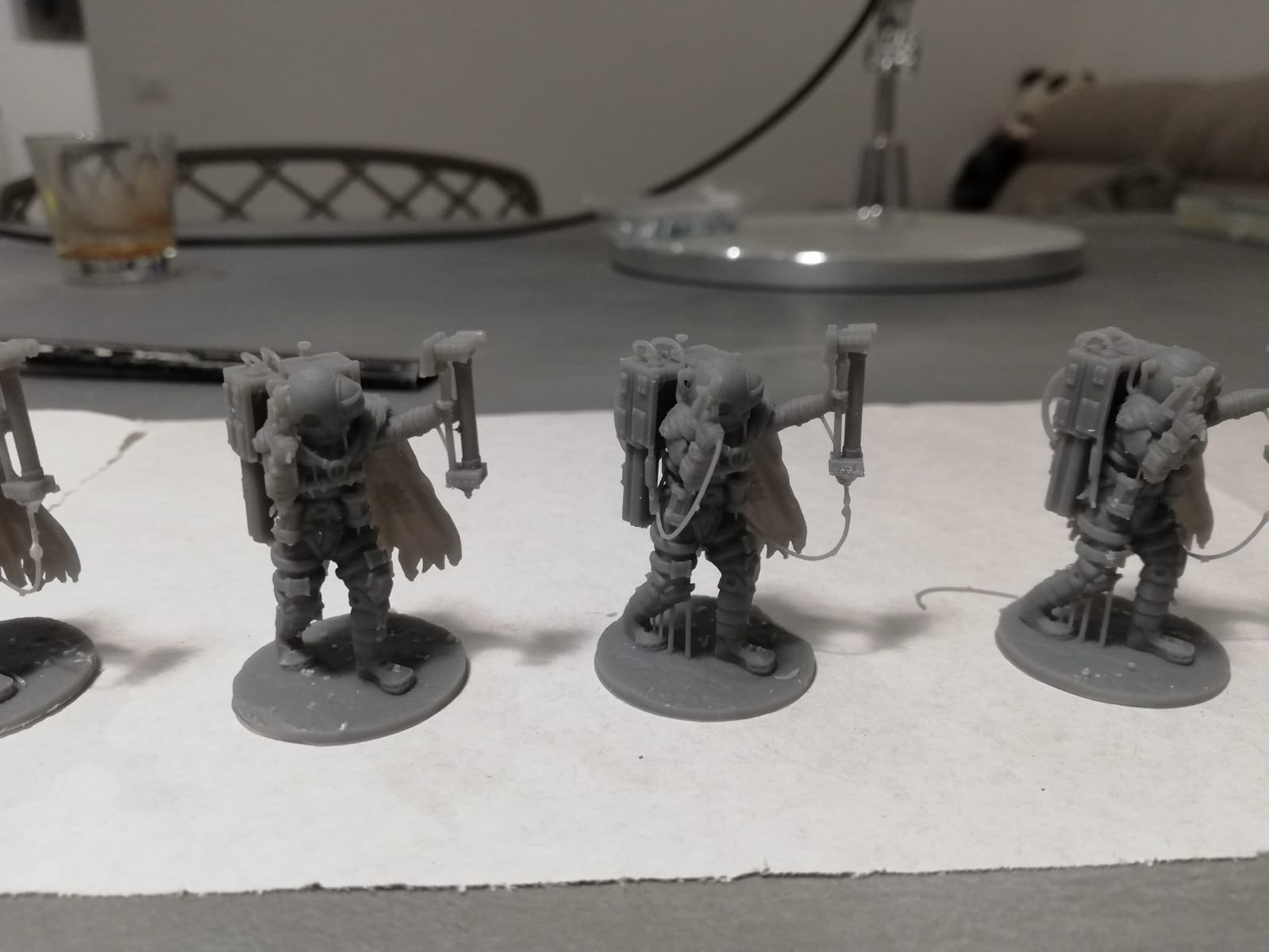 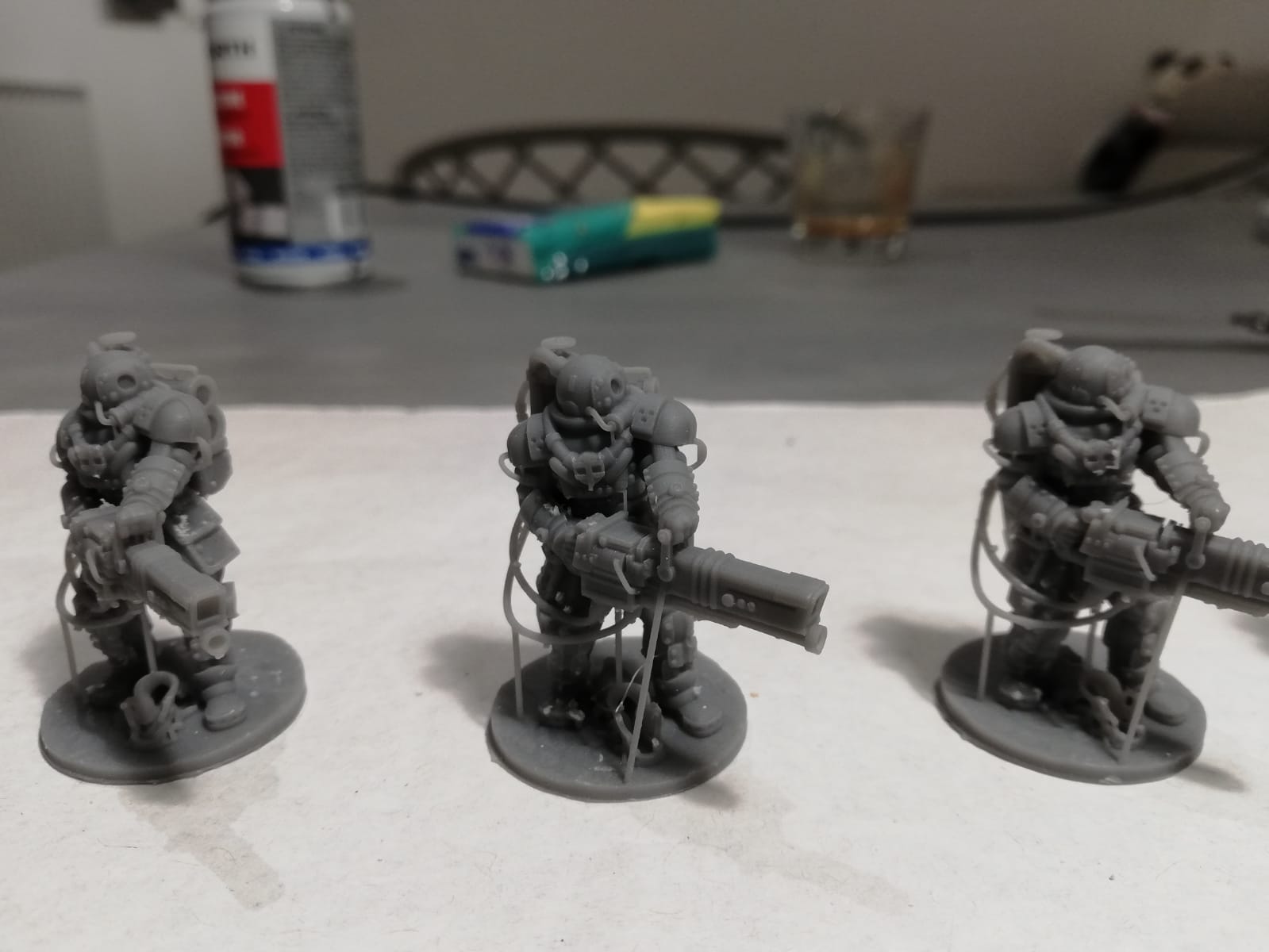 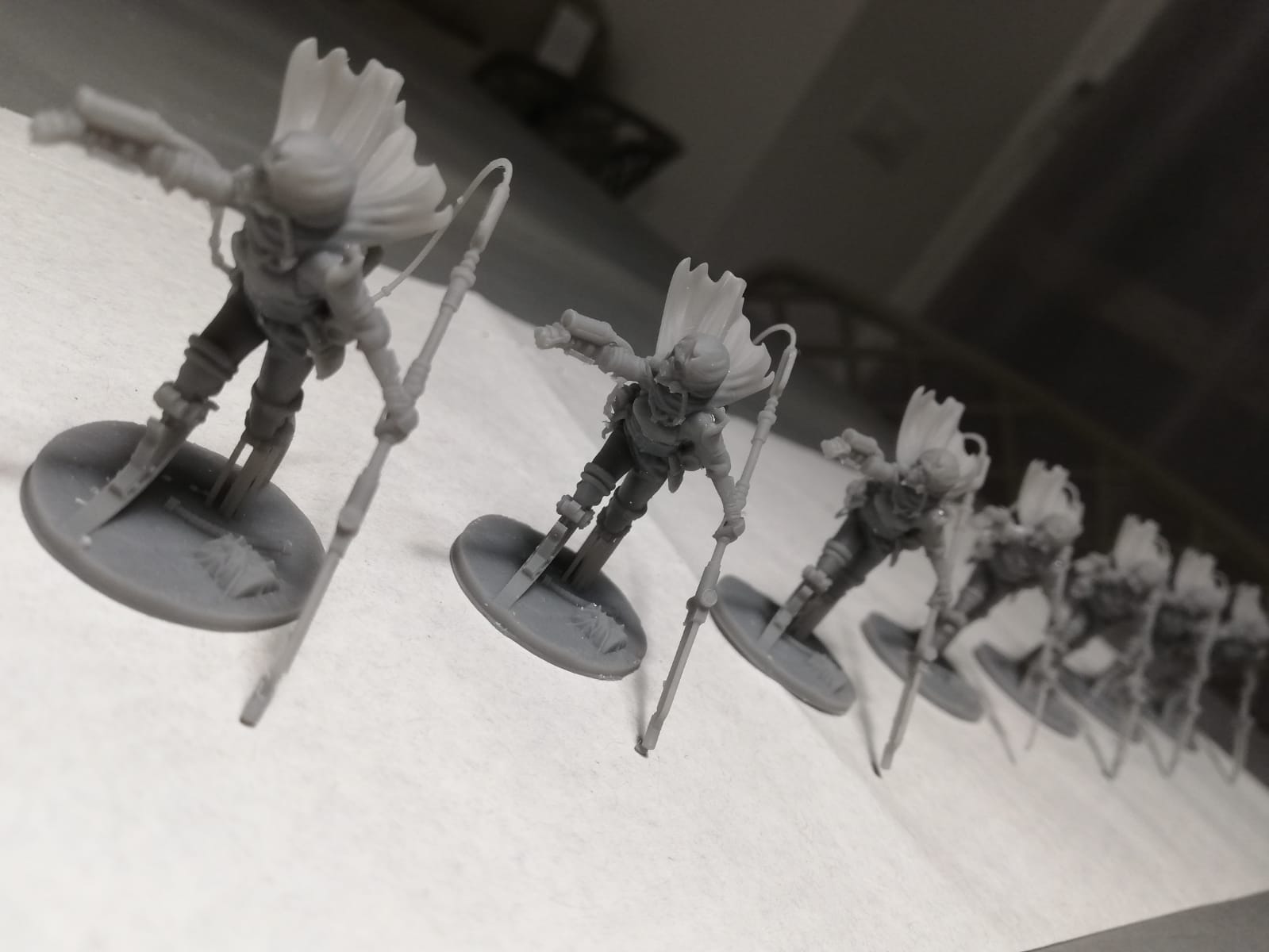