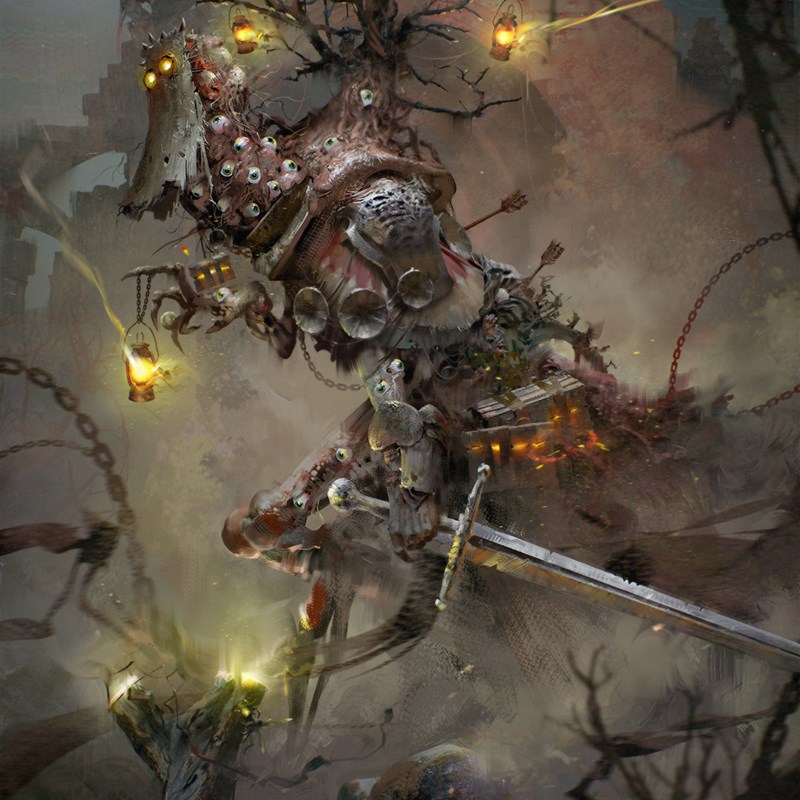 New journey is just starting - take a part in it and meet the first King of Ruin, Claudyne, The Unknighted

The First Sword of Lothian.

Builder of Sorlois, the Unfinished City.

The Scourge of the West.

Claudyne is known by many names in Avalon, but his tale did not begin on the island. He comes from the kingdom of Acuilee in Homelands - an old realm that has long rivaled the growing empire of Pendragons.

The fragments of chronicles recovered from Homelands reveal that after decades of war and betrayal, the ruler of Acuilee, king Aquila, was eventually forced into submission. He swore his allegiance to Arthur. In return, he would marry Arthur’s sister Morgaine, while his eldest son, Claudyne, would become the knight of the Round Table.

The arrival of Red Death put a stop to these plans.

Although Claudyne did all he could to distinguish himself during the evacuation of Homelands, covering the escape of Arthur’s subjects in his splendid golden armor, Arthur never had a chance to knight him. He promised to do so once the fleet arrived safely in Avalon.

Unfortunately, Claudyne’s ship, among many others, crashed on the wrong side of the island, cut off from Arthur and his knights. Claudyne became a ruler of western Avalon and managed to build the first human kingdom there: Lothian.

Many conflicting legends surround him. The world still awaits someone who will piece the fragments of the past together, reconstructing the history of Claudyne’s rule and eventual fall. What’s certain is that - just like other great heroes of the west - Claudyne eventually journeyed eastward through wyrdness, to seek the One and True King, Arthur. He dreamt of reconnecting with the rest of the human survivors and finally claiming his place at the Round Table.

He failed in his quest. Decades later, he came back to Lothian - bitter and changed into something inhuman. Almost immediately, he forced the malnourished, poor settlers of the realm to build a new capital of Sorlois, a city to rival the lost Camlann that was too ambitious and grand to materialize.

Thus, Claudyne became known as the first King of Ruin - though those who knew him before his transformation claimed that despite his appearance and unfathomable goals, he is still the same person, with the same deep desires and even deeper fears… 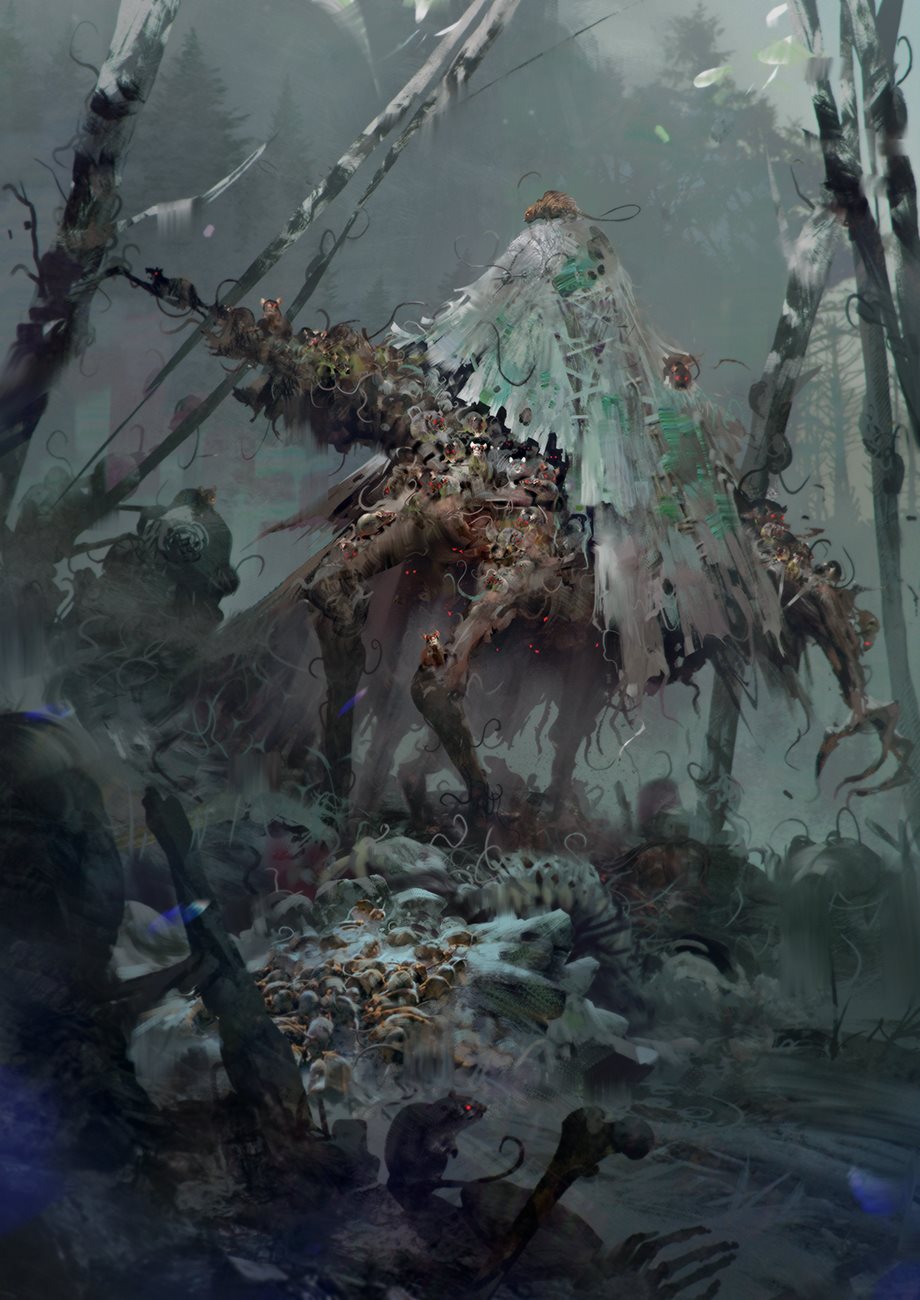 It’s time for our first official Tainted Grail: Kings of Ruin update. Yes, it took us a while. But, just like we mentioned in the comments at the start of the project, the game is still in early production, and the crowdfunding campaign is still a while away.

This has a silver lining, though. We now have a chance to involve our backers earlier,especiallythanks to Gamefounds pre-campaign updates. And in today’s update, we’ll give you a chance to choose the look of our first King of Ruin that is going to appear in many illustrations throughout the game, and will materialize as a beautiful, large model in the Tainted Grail: Kings of Ruin box!

About Kings of Ruin 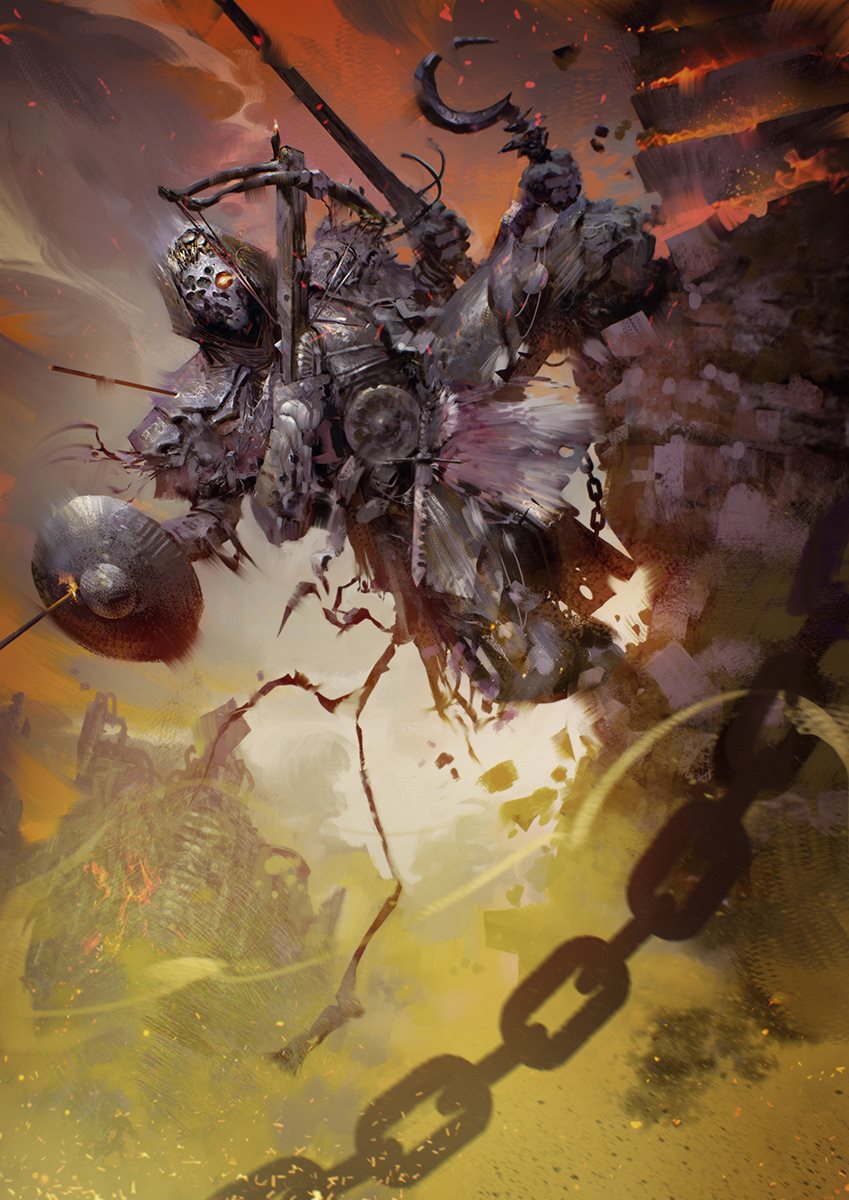 First, you should know a bit more about who these « Kings of Ruin » are and how they tie into the Tainted Grail gameplay.

In each Tainted Grail campaign, players traveled the overworld map built from Location cards. But player minis were not the only thing roaming these maps. We also had guardian creatures (like all our Monsters of Avalon) and special entities with unique rules (like the Fore-dweller, the Fore-dweller army, or Danse Macabre).

Kings of Ruin are the expansion of this concept. Each of them haunts one of the realms you will travel through in our new Tainted Grail game, and is deeply tied to that realm’s lore, mood, history, and some smaller encounters found there. You will have at least one King of Ruin looming somewhere on the map for significant parts of the game. It is up to you whether to fight them or attempt to prevail in their presence through the use of Diplomacy. Regardless of your choice, you will meet with each of them a couple of times in progressively harder Encounters. Naturally, small secret items and parts of the story that players may uncover throughout western Avalon will greatly influence these interactions, allowing you to understand Kings (and their goals) better. And - perhaps - to eventually end their threat for good.

And while there is a lot of story and decisions in the game not related to these three beings, we hope that they will provide many memorable moments and difficult choices that Tainted Grail is known for.

With all this behind us, we can get to the most important part: the vote for the design of our first King of Ruin, Claudyne the Unknighted. With Claudyne, we wanted to convey many things that build his character, like the fact he wanted to become the most « knightly » of all knights in existence, his obsession with grandeur, his love for magnificent architecture and splendid mounts. The fact Kings of Ruins are not humans but supernatural beings allowed our designers to come up with all sorts of wonderful and weird concepts.

Important note about the vote: By no means it diminishes our creative vision for the game. Just theopposite. Those 4 concept werechosenby us from many, many others and we are fine with all of them. Also, they are just concept art and from there we will still add TONs of extra work on the concept, art and model.

So, which version of Claudyne speaks to you the most? 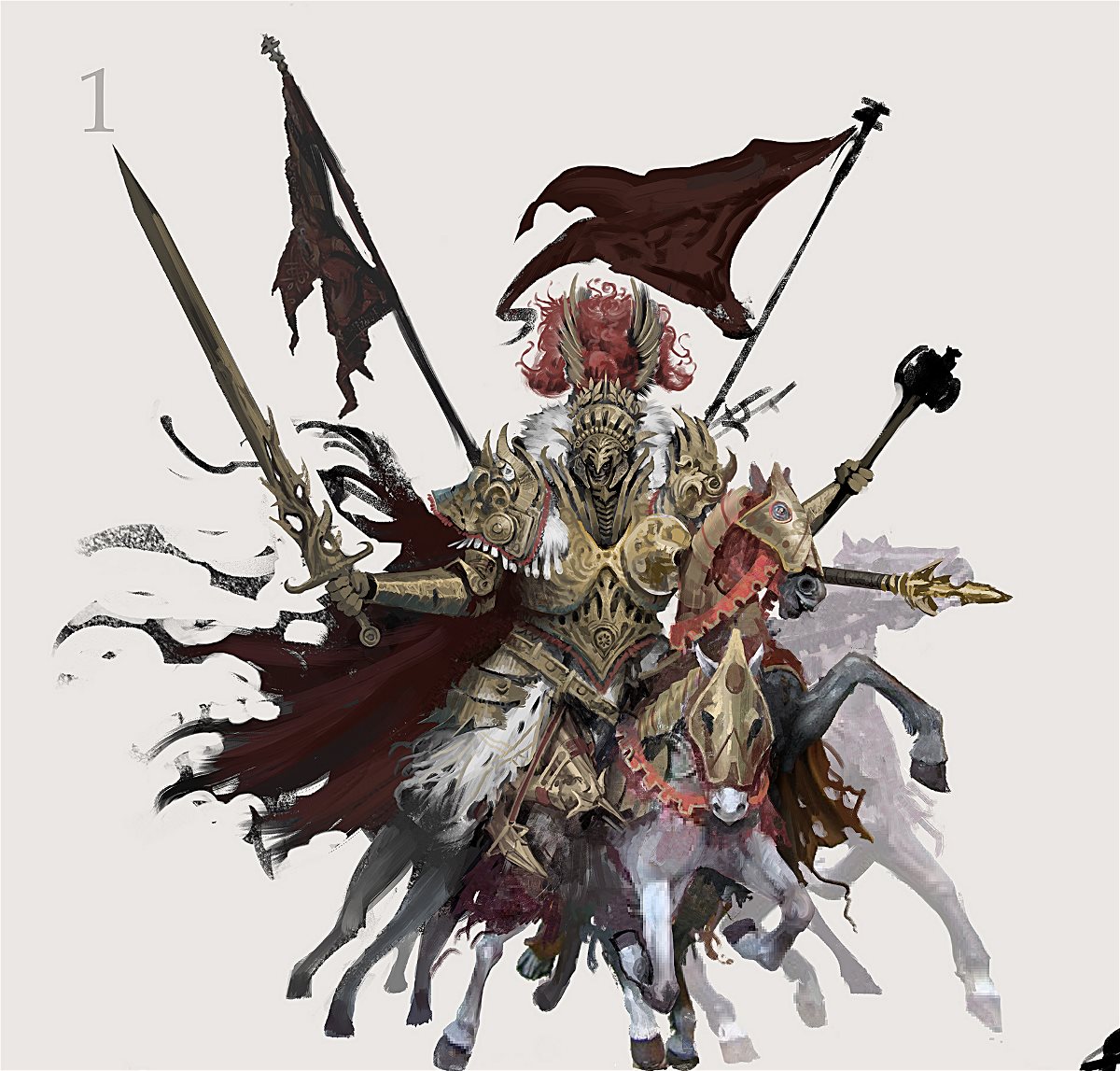 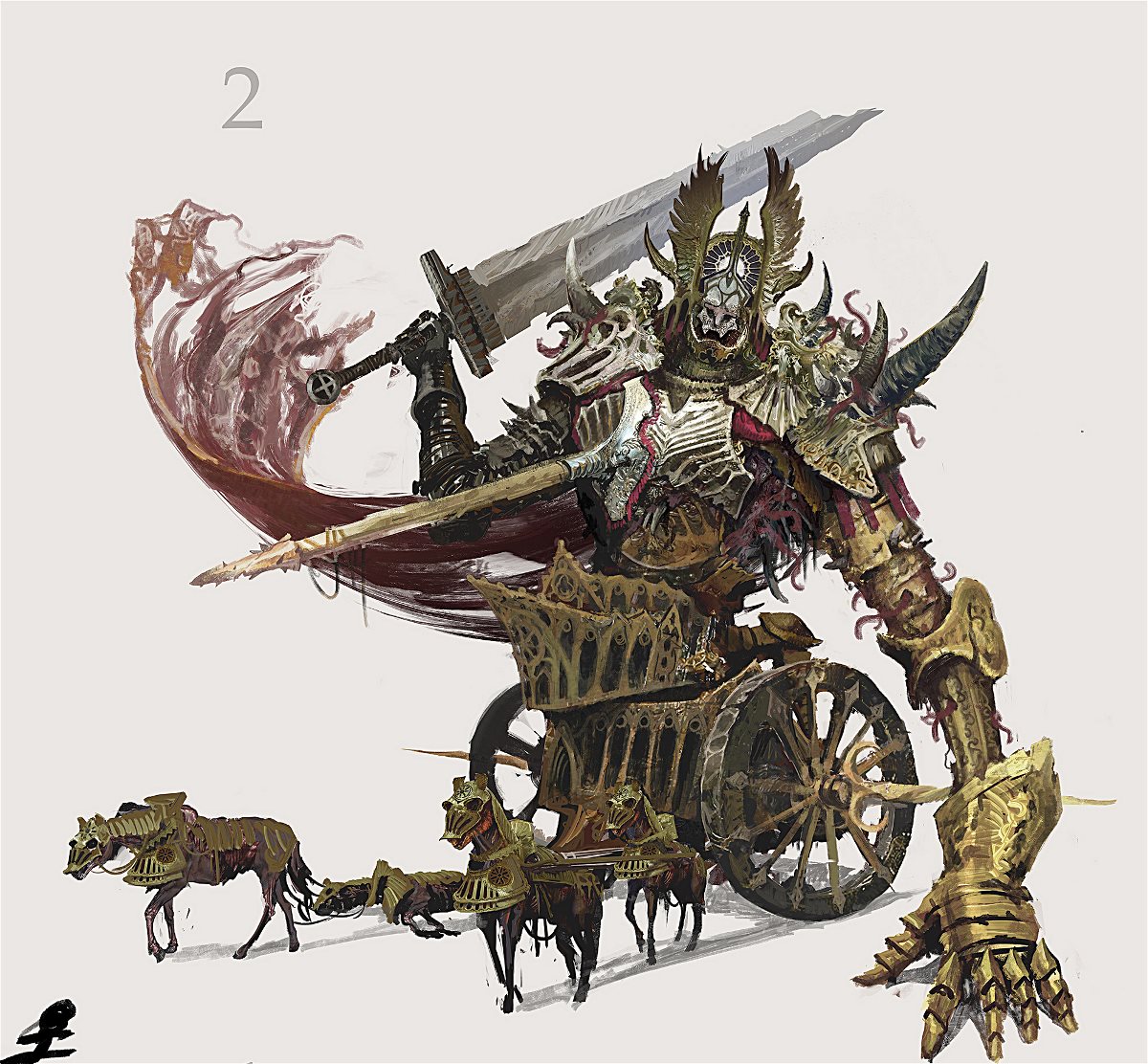 And if you want to do more than just clicking the button, please drop us a line in the comments to let us know if you like this character, whether you look forward to seeing what Kings of Ruin bring to Tainted Grail gameplay - and whether you’d like to see similar reveals about two other kings in the future. And if you wish to take part in other similar votes, be sure to follow this project! 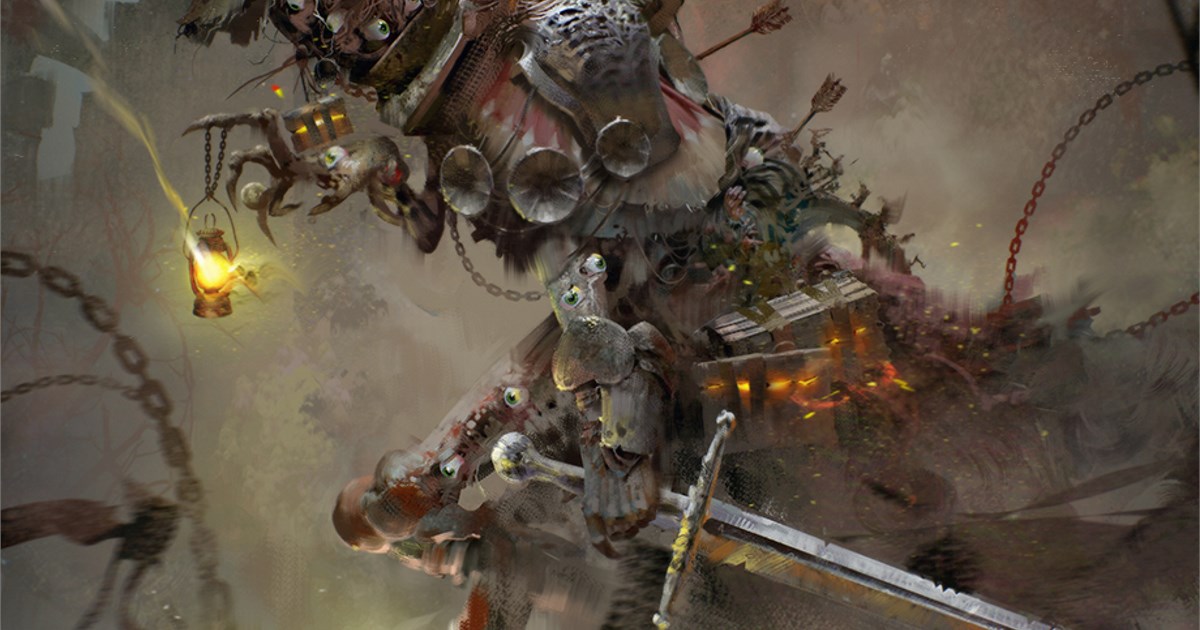 New journey is just starting - take a part in it and meet the first King of Ruin, Claudyne, The Unknighted