Are you ready to risk everything?

The Sixth World. One of the most enduring RPG settings ever created, with shadows growing deeper and darker in its latest edition. Dominated by enormous, world-striding megacorporations strangling metahumanity in their clutches, by 2080 most of the planet has surrendered to these corporate overlords.

But from the darkest shadows, defiance flickers in people known as shadowrunners. They risk everything—wrestling magical energies, channeling them into power; putting their minds against the electronic void of the Matrix; trading flesh and blood for chrome and steel.

Stand up, join them, and dare to risk it all!

Hot on the heels of our announcement launching Shadowrun, Sixth Edition, it’s time to take a closer look at the blistering fusillade of action-packed books, games, and swag that will shake the Sixth World! The Shadowrun Sixth World Beginner Box is the easiest way to dive into the intrigue, grit, and action of one of the most enduring role-playing settings of all time! It includes everything needed for a game, including quick-start rules, character dossiers, an adventure, gear and magic cards, dice, and more! The Neo-Anarchist Streetpediais your definitive guide to the Shadowrun universe. With hundreds of entries, it covers corporations, shadowrunners, politicians, nations, cities, criminal organizations, and more. Even better, it gets to the point and tells you what you need to know now, so you hit the streets a little smarter than you were when you woke up this morning. No Future is the Shadowrun guide to Sixth World culture, including information on music acts, trid movies and series, media sources, and sports, with a look at some of the voices bubbling up from the underground and demanding attention. With detailed setting information and relevant rules, No Future adds new elements and depth to Sixth World role-playing.

NOTE: No Future was originally released in PDF format earlier this year as a sourcebook for Shadowrun, Fifth Edition. The short rules section was updated to the Sixth World system for its print release. An updated PDF will be available upon No Future’s print release, and all customers who previously purchased the book in PDF format will receive a free upgrade to the updated PDF. Shadowrun, Sixth World is the latest edition of one of the most popular roleplaying games of all time. Whether on the desperate streets or in the Machiavellian high-rises of the corporate elite, dangerous people lurk in every corner of the Sixth World. And they’re in here, too, with a quick backstory, a hook, and streamlined game stats. Bring the Shadowrun universe to life by putting these characters at your fingertips and in your game! Tossing a handful of dice to out-maneuver or out-gun your opponent always brings a rush. Especially when you’re spending some Edge to boost your actions. Add more dice to your Shadowrun game, along with a great way to track your Edge! They’re rough. Tough. Ready for action. And you can fit five of them in your hand. Bring Sledge the ork street samurai, Coydog the elf shaman, Gentry the human decker, Hardpoint the dwarf rigger, and Blanco, the troll weapons specialist to your game table and let them unleash chaos! Experience a gamemaster screen unlike any other. Features include a large outward-facing pocket for the insertion of various scene inserts—included in the pack—to change up the players’ visual experience. A variety of interior card pockets allows the GM to quickly and easily track NPCs, and other reference cards. Finally, a series of Reputation trackers are built directly into the screen, enabling a runner team to track their heat from Ares to Aztechnology, and more, changing up the games as they play. (Note: the image above is a teaser; the full image will be revealed at a later date!) A new edition of Shadowrun requires new stories, and Cutting Black launches Shadowrun, Sixth World with a bang! Following on the immersive style of classic Shadowrun books such as Universal Brotherhood and Bug City as well as newer successes like Dark Terrors, Cutting Black sets up storylines full of dark dealings and intrigue that will shake the Shadowrun setting and inspire game campaigns for months or longer. Players and gamemasters alike diving into the new edition will need this book as a resource to find out what’s happening in the Sixth World and to keep up with its twists and turns. 30 Nights is a detailed campaign book to help players learn and have fun with Shadowrun, Sixth World. It introduces players to new rules and new plot lines, plunging them into the growing chaos in the UCAS as they look into the source of a mysterious blackout plaguing Toronto. The adventures can be played as a single gaming session to introduce players to the new rules, multiple sessions hitting highlights from the adventures, or a detailed campaign propelling the players through each of the 30 nights of the blackout and ensuing chaos. This book includes a laminated, poster map of Toronto, with expanded content. 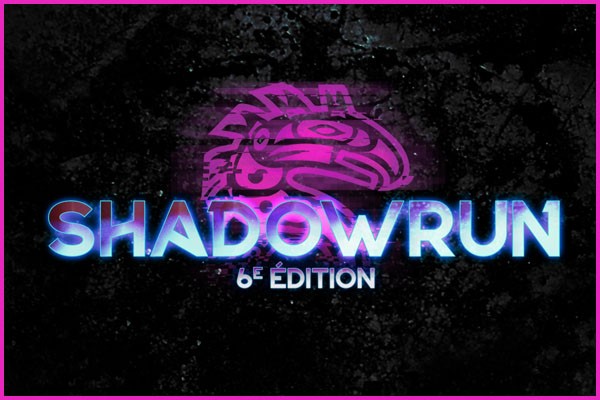 We got a great picture in of the new High Rollers corporate dice, featuring Ares, Aztechnology, Mitsuhama, Saeder-Krupp, and Spinrad Global!