Q: What is Cyberpunk Red? A: Cyberpunk Red is a new edition of Cyberpunk, the original tabletop roleplaying game of the Dark Future created by Mike Pondsmith and published by R. Talsorian Games.

Q: What system is Cyberpunk Red? Fuzion or Interlock?
A: Cyberpunk Red will use the classic Interlock system, though, as with any new edition of a TRPG, there will be revisions and updates.

Q: Will there be Roles (aka classes) in Cyberpunk Red?
A: Yes, there will be roles. They will be familiar but many will have evolved or changed. Some will have alternative special abilities. There will also be rules for changing roles during play.

Q: When in the timeline does Cyberpunk Red take place?
A: Cyberpunk Red takes place between the end of the 4th Corporate War (2022 or so) and 2077. We realize that’s a long stretch of time but aren’t yet ready to say where, specifically, in that time period Red will begin.

Q: What is Cyberpunk Red’s relationship to Cyberpunk 2077?
A: Red will show the Cyberpunk world in a period of rebuilding following the 4th Corporate War. It will help show how society moved from that world shattering event to what’s presented in the video game.

Q: When will Cyberpunk Red be released?
A: We’re aiming for an August 1 release but that will change if we feel the book isn’t ready. Ideally, it will go on sale at our booth at GenCon and online via DriveThruRPG at the same time. It might also be available via our webstore then.

Q: What formats will Cyberpunk Red be available in? How much will it cost?
A: Cyberpunk Red will be a full color, hardcover book in physical form and a full color PDF in digital form. The suggested retail price is yet to be determined.

Q: How soon will Cyberpunk Red be in stores?
A: That depends on how quickly distributors and retailers order it once its made available, though we won’t open orders until we’re sure we can fulfill them.

Q: What sort of art will Cyberpunk Red have?
A: Cyberpunk Red will have new art, commissioned from a number of talented artists. The art will be full color and on par with any modern RPG.

Q: Will Cyberpunk Red be available in other languages?
A: We do not translate TRPGs ourselves. That being said, we have several partners in other countries who have localized our games. We anticipate licensing the rights to companies in several countries in the future.

Q: Is Mike Pondsmith involved in Cyberpunk Red?
A: Absolutely. He is both the lead developer and primary writer on the project.

Q: Will Cyberpunk Red be compatible with the Witcher TRPG?
A: Not without work. Though they’re both Interlock, each is specifically designed to work within their genre. Of course, we’ve already had some arguments about Geralt vs. Morgan Blackhand…

The Cyberpunk Red Jumpstart Kit will debut at Gen Con 2019, and it will be limited to two boxes per customer. 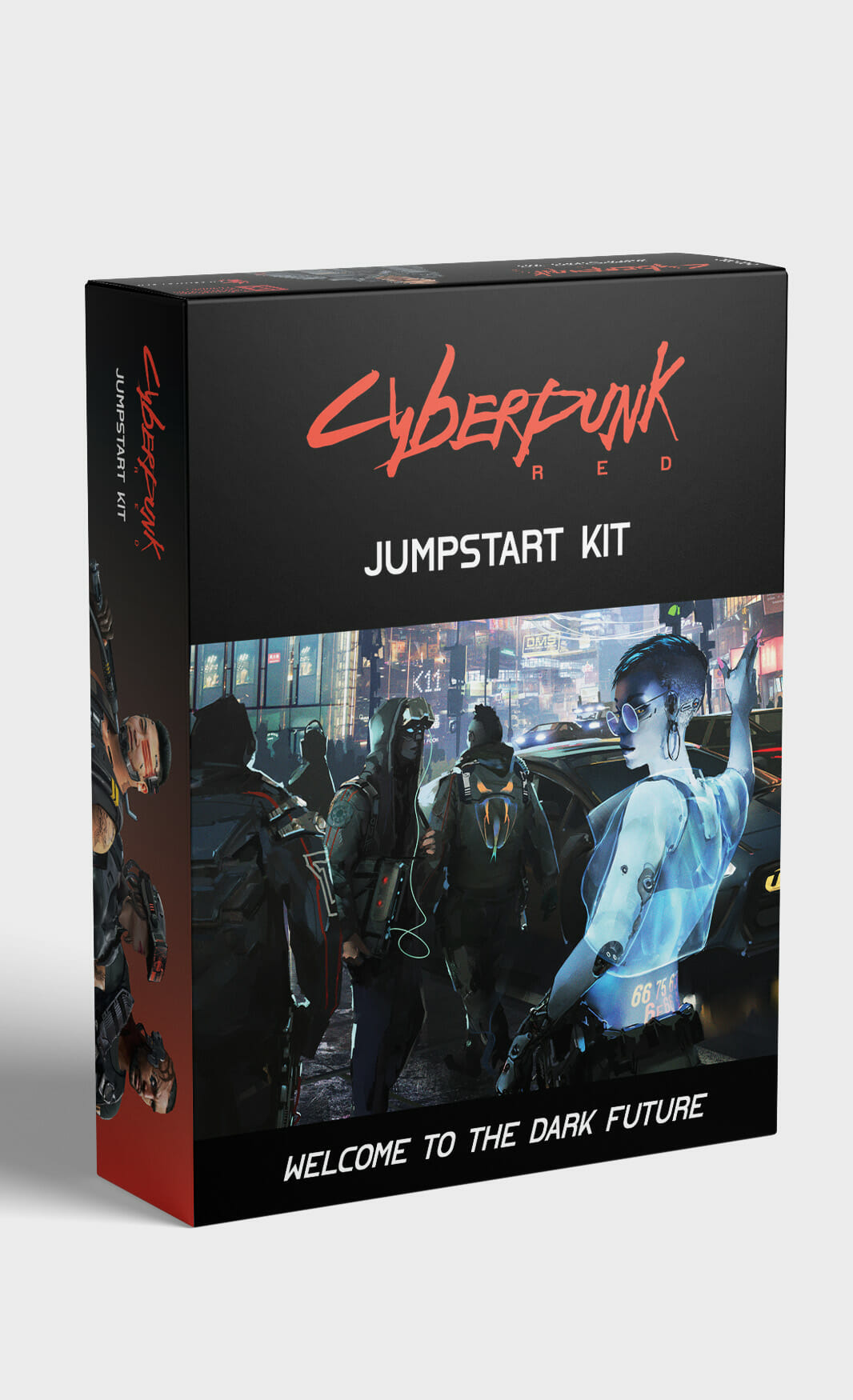 If you want to rush straight there, as Mike Pondsmith’s R Talsorian Games will presumably only have limited numbers, then make your way straight to booth 1852.

The physical Cyberpunk Red Jumpstart Kit will be available from R Talsorian Games’ webstore and retailers after Gen Con. Geek Native is told that will happen “as soon as possible” after the event but there’s no fixed date.

The Jumpstart Kit is not the full core rulebook. That’s coming later, and there is no release date confirmed. This is enough to get you started.

Those two booklets will be perfect bound, not stapled, and are full colour with new art. The dice are cyberpunk-themed and made by Q-Workshop.

The back of the box 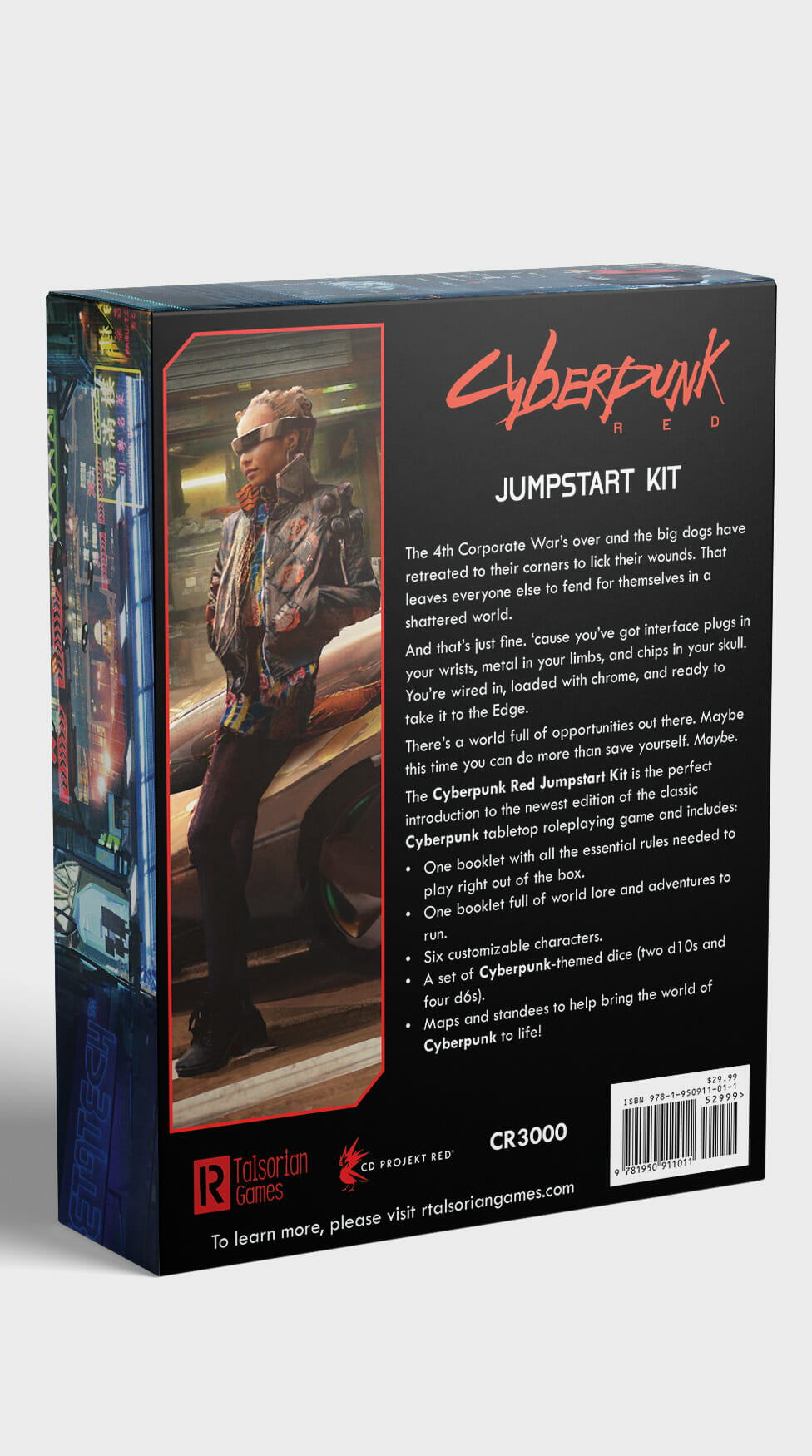 The contents list is from the back of the Jumpstart Kit box. Here’s the rest of the text;

The 4th Corporate War’s over and the big dogs have retreated to their corners to lick their wounds. That leaves everyone else to fend for themselves in a shattered world.

And that’s just fine. ’cause you’ve got interface plugs in your wrists, metal in your limbs, and chips in your skull. You’re wired in, loaded with chrome, and ready to take it to the Edge.

There’s a world full of opportunities out there. Maybe this time you can do more than save yourself. Maybe.

Cyberpunk Red is a new edition of the original tabletop RPG from Mike Pondsmith and published by R Talsorian Games. It’ll use an updated version of the Interlock game system.

The exact date of when Cyberpunk Red takes place has not yet been revealed but we know it takes place between the end of 4th Corporate War in 2022 and up to 2077. The Jumpstart Kit might reveal when precisely the new tabletop roleplaying game begins. 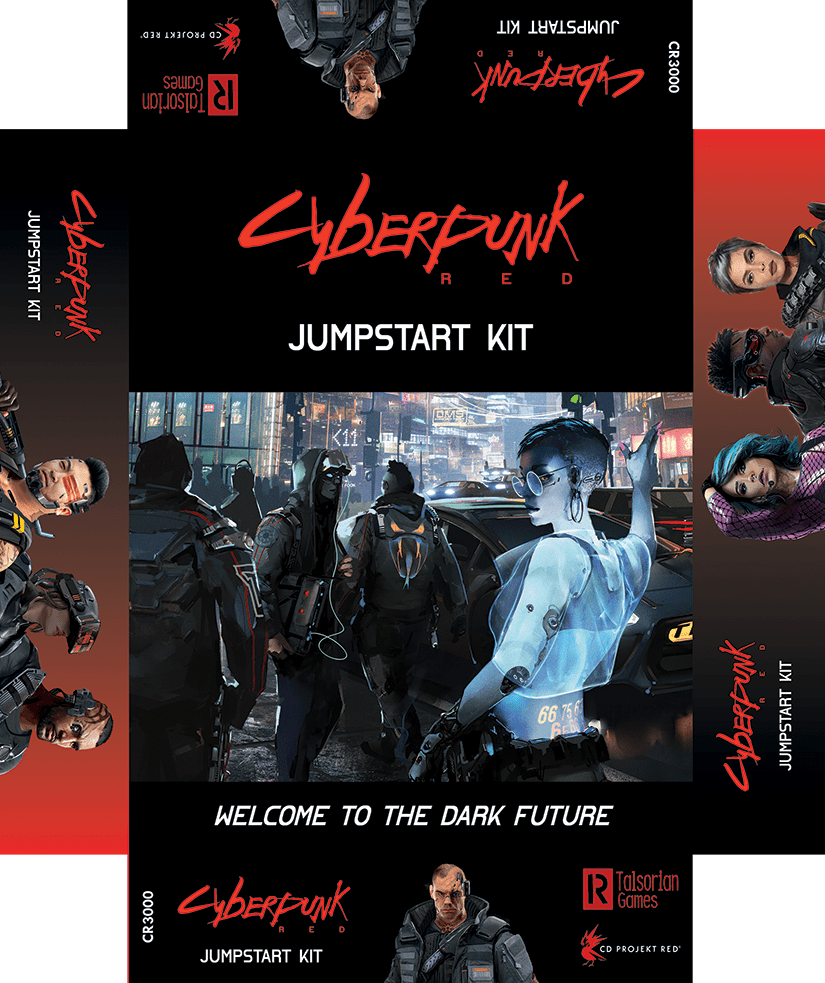 If you’re not in already in the know, the Cyberpunk Red Jumpstart Kit will be a boxed set designed as an introduction to the upcoming new edition of our classic tabletop roleplaying game of the Dark Future, Cyberpunk Red. Our Jumpstart Kit follows in the footsteps of other “starter boxes” by providing a group with everything they need to play the game right away, all in a single package: essential and streamlined rules, Cyberpunk-themed dice from QWorkshop, an easy to run adventure, some juicy world lore, and…

The Cyberpunk Red Jumpstart Kit comes with six almost completed characters (also known as Edgerunners) for gamers to play, right out of the box!

Don’t like one of the names? Want to change someone’s gender identity or image? Go for it. The names, assigned genders, and images are just starting points. Make these Edgerunners your own. And speaking of making them your own…

Notice we said “almost completed” up above? That’s because you will be customizing your Edgerunner to fill in a few blanks. First, you’ll pick a Statistics spread. Statistics are the measurement of your character’s abilities: reflexes, intelligence, and so forth. You’ll decide, either through a random roll or just plain choice, if your Edgerunner will be a little more buff but a little less smart or maybe a not quite as fast but plenty lucky. There are ten Statistics in Cyberpunk Red. You’ll also have Hits. We’re keeping health simple in the Jumpstart Kit. You’ll start off with a number of Hits. Take damage and those Hits go down. If they go down far enough, you’ll be Seriously Wounded and start taking penalties to your actions. Drop to zero, and you’ll need to start worrying about if people are going to harvest your organs before your body gets cold.

It isn’t just Statistics you get to customize, though! You’re also going to be determining your character’s background using an abbreviated version of our Lifepath system. In the Jumpstart Kit, you’ll either be rolling or choosing to help determine your character’s background, motivation, goals, friends, enemies, romances, and personality. With Lifepath, you have a chance to make one of the Edgerunners in the Jumpstart Kit your own unique character.

Each Edgerunner has their own compliment of twelve Skills. Of course, they’ll have Skills that revolve around their Role. For example, the Tech has a Basic Tech Skill and the Rocker has a Performance Skill. But we’ve made sure each Edgerunner also has some good general use Skills. Each has a Skill for most situations, from combat to social interaction. That means if your group doesn’t have a full six players you don’t have to worry about flubbing a mission just because you’re missing an important Skill.

Old hands at Cyberpunk will notice we’re not mentioning Role-specific Special Skills here. Those aren’t included in the Jumpstart Kit in order to make the rules smooth and simple for new players. Don’t worry, though! We aren’t abandoning Special Skills. Those will show up with revisions to make them more useful and interesting in the Cyberpunk Red core rulebook.

We’ve stuck to the basics with the Jumpstart Kit. Every Edgerunner comes with armor, which is divided into just “head” and “body” in terms of “zones” to help combat move quicker. Every Edgerunner also has in their possession a selection of weapons and a few pieces of important gear. Nothing too complex. When playing right out of the box, no one wants to be bogged down by a page long inventory list.

It wouldn’t be Cyberpunk without cyberware! Each Edgerunner in the Jumpstart Kit comes preinstalled with a selection of cyberware. Their game effects are described in an easy to understand manner right on the character sheet. To give you an idea on the variety: our Tech’s cybereye has a built-in camera while our Nomad’s cybereye has low light vision to eliminate perception penalties in dark spaces and the Solo’s eye has a built-in targeting system to give a bonus to ranged attacks. There’s also cyberweapons, cyberlimbs, interface plugs, and more.

We worked hard on the new Edgerunners in the Cyberpunk Red Jumpstart Kitto balance simplicity with depth and “play right out of the box” with “make these characters your own”. We hope, when you see it, you’ll agree.

The Cyberpunk Red Jumpstart Kit debuts at GenCon at the R. Talsorian Booth(1852) on August 1st and online as a digital download at DriveThruRPG on the same day. We’ll have the physical version in the stores, including our own webstore, as soon as possible after.

Until then, stay safe on the streets.

“...will go to any length to keep their clients from harm.” Sneak peak of another citizen of Night City - CyberPunk Red fresh from the 3D printer!