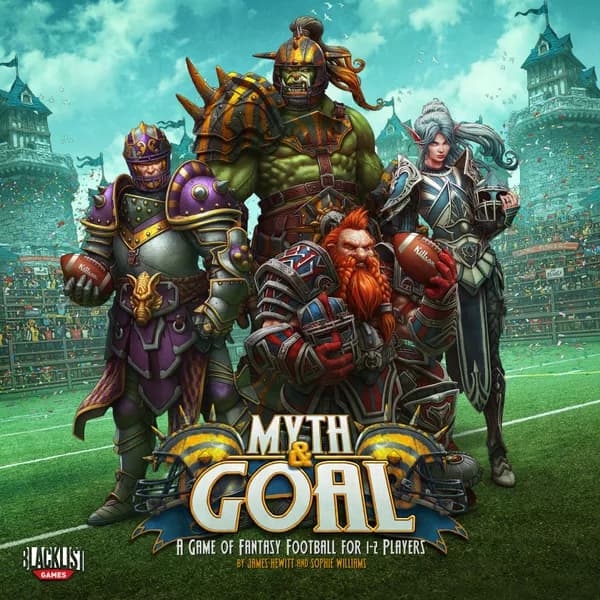 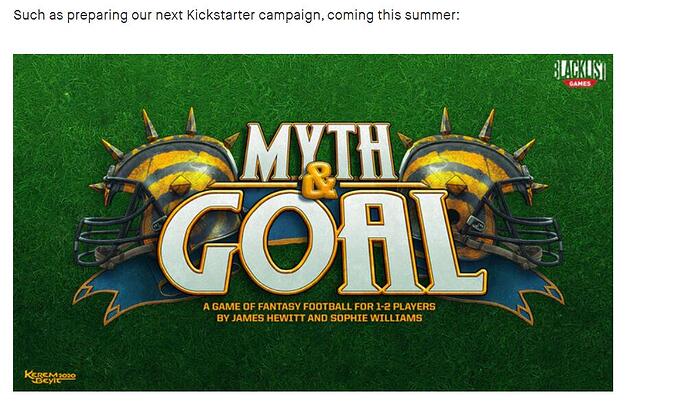 Upcoming miniatures game Myth & Goal wants to capture the strategy and challenge of managing a fantasy football team - and it’s headed to Kickstarter this summer. Dicebreaker can exclusively reveal the first gameplay details and cover artwork.

Designed by Sophie Williams and James M. Hewitt - who together comprise UK tabletop studio Needy Cat Games - the fanatsy football miniatures game aims to bring a new perspective to the genre popularised by titles such as Blood Bowl, Guild Ball and DreadBall.

Both Williams and Hewitt are former Games Workshop alumni. Hewitt previously worked on the Warhammer maker’s 2016 reboot of Blood Bowl - as well as its simplified spin-off Blitz Bowl - and DreadBall, a sci-fi sports game from Kings of War publisher Mantic. Despite sharing some “design DNA” with Blood Bowl, the designers insisted that Myth & Goal does not play like either game and should not be considered a spiritual successor in any way. 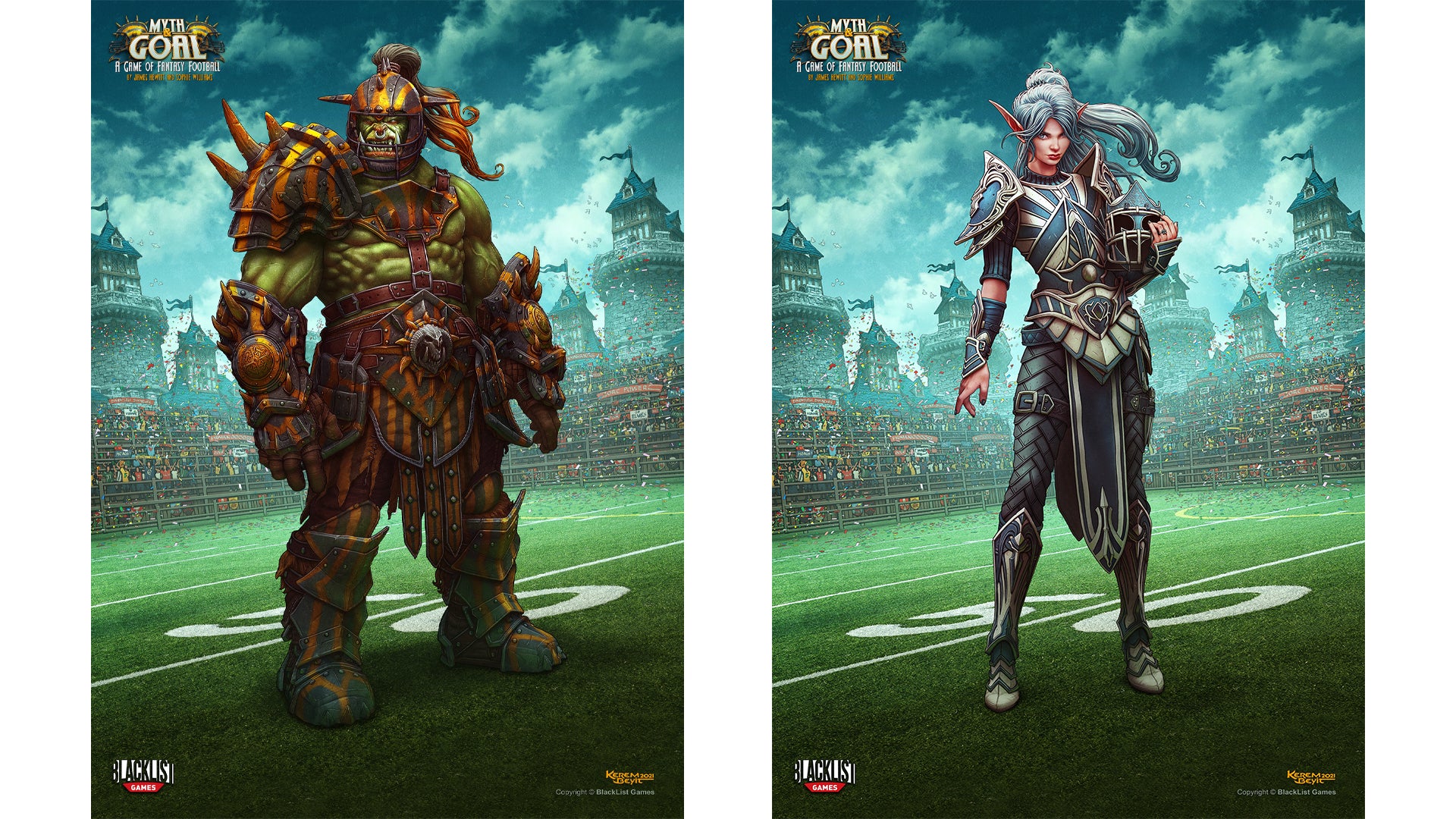 Making Myth & Goal seemingly unique as a fantasy sports game is its increased focus on team management and tactics. Williams and Hewitt told Dicebreaker they aim to “put the player in the role of bench manager”, needing to consider which players to keep on the field - and which to substitute out at the right moment - for the most efficient performance.

Myth & Goal will be split into a number of periods - the exact number and structure were still being finalised at the time of interview - during which opposing teams will take to the field. Between each period, managers will have the opportunity to swap out players who have become fatigued by playing, choosing a fresh squad of five players for each period from their full team of eight. Becoming exhausted results in a player’s card being flipped, reducing their performance unless they’re withdrawn to the bench - the only way to recover fatigue.

Williams and Hewitt described the need to manage players’ limited stamina as encouraging managers to constantly consider the “bigger picture” of a match, rather than going for broke in every situation. Periods can be played defensively to allow attackers to recover their energy for a counter-attack later on, fostering gameplay that aims to be “strategic, not just tactical”. Despite the important role of mid-game management, keeping downtime between periods to a minimum is said to be a key consideration. 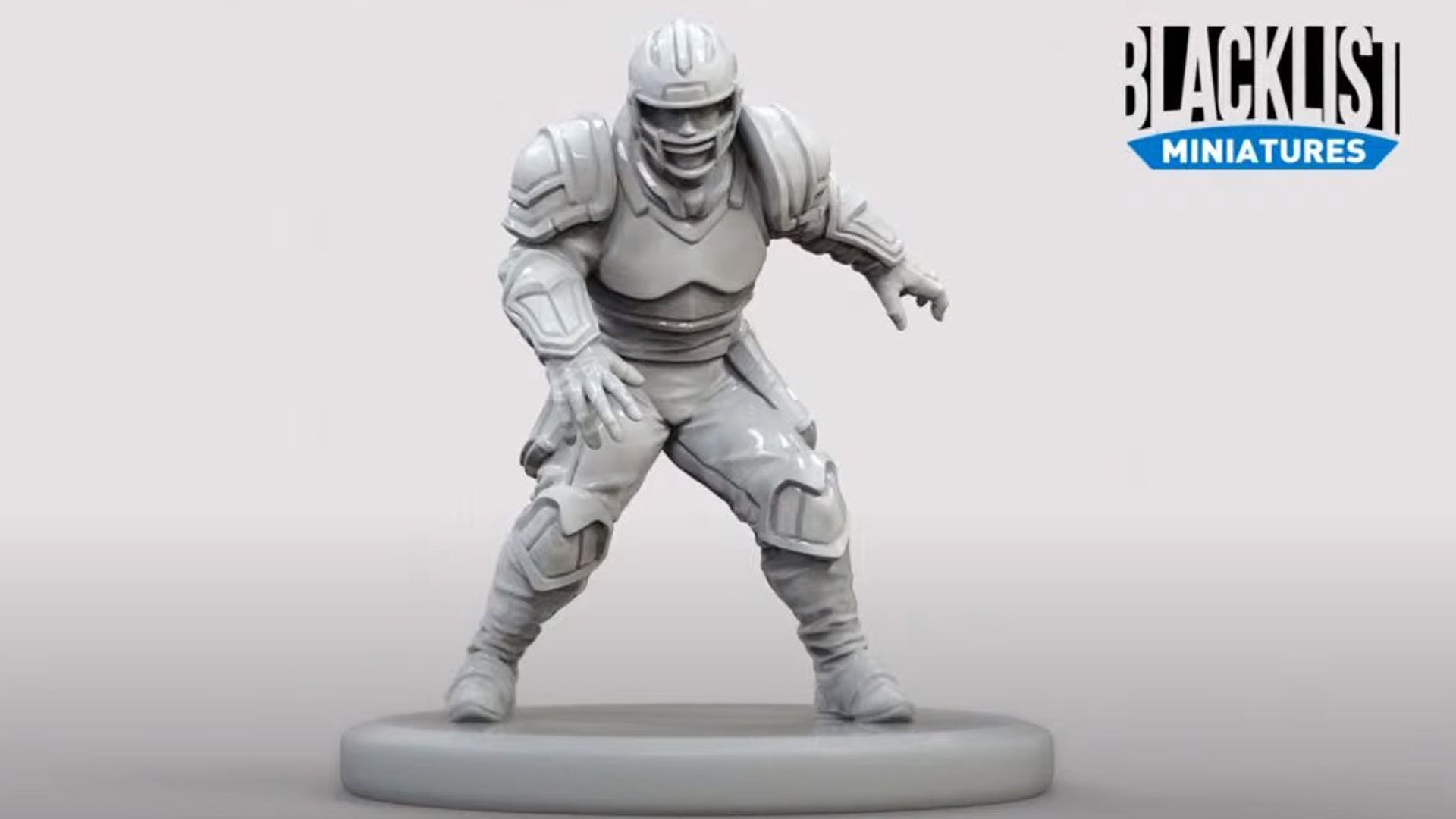 In contrast to the granular ruler-based movement of games such as Blood Bowl, movement in Myth & Goal is area-based, with players moving between set regions of the field. As such, the importance of player placement is simplified, becoming less about plotting the perfect route and more about positioning effectively for attack and defence strategies.

Managers build a hand of cards - currently referred to as tactic cards, though that’s yet to be finalised - at the beginning of the game. These cards are then played during each match to help gain an advantage over the opposing team and other benefits.

Characters can choose to take additional fatigue to perform extra abilities and actions, with the choice to push at the cost of stamina coming down to the player in “nine out of ten” situations. Williams and Hewitt said that the use of luck-based dice rolls in Myth & Goal is primarily limited to risky manoeuvres, such as throwing the ball or attempting to knock rival players over, influenced by the consequences of decisions and dice rolls in tabletop RPG Blades in the Dark. Players on the field can earn infractions for illegal play, eventually being sent off for multiple transgressions.

Teams will comprise eight players, with five on the field at any one time. These players will be represented by single-piece PVC miniatures similar in scale to Blood Bowl’s 28mm figures.

In a manner similar to board game Small World’s modular factions, players will be able to create unique teams from the combination of a team - typically the species of the players, such as human, dwarf, orc or elf - with a reputation, which defines their general play style. Possible reputations mentioned by Williams and Hewitt include agile, fan-favourite, brutal and aggressive, although exact details are still to be confirmed.

The team’s type will determine its fixed structure and the number of players in each position. Positions include chargers, strikers, rangers and vanguards. The equivalent role to Blood Bowl’s lineman has been split into three separate positions in Myth & Goal - guardian, sentinel and ranger - in an attempt to make the traditionally dogsbody position “more interesting” and appealing to players due to its high stamina. The designers expressed their intention to make “every miniature fun to play”. 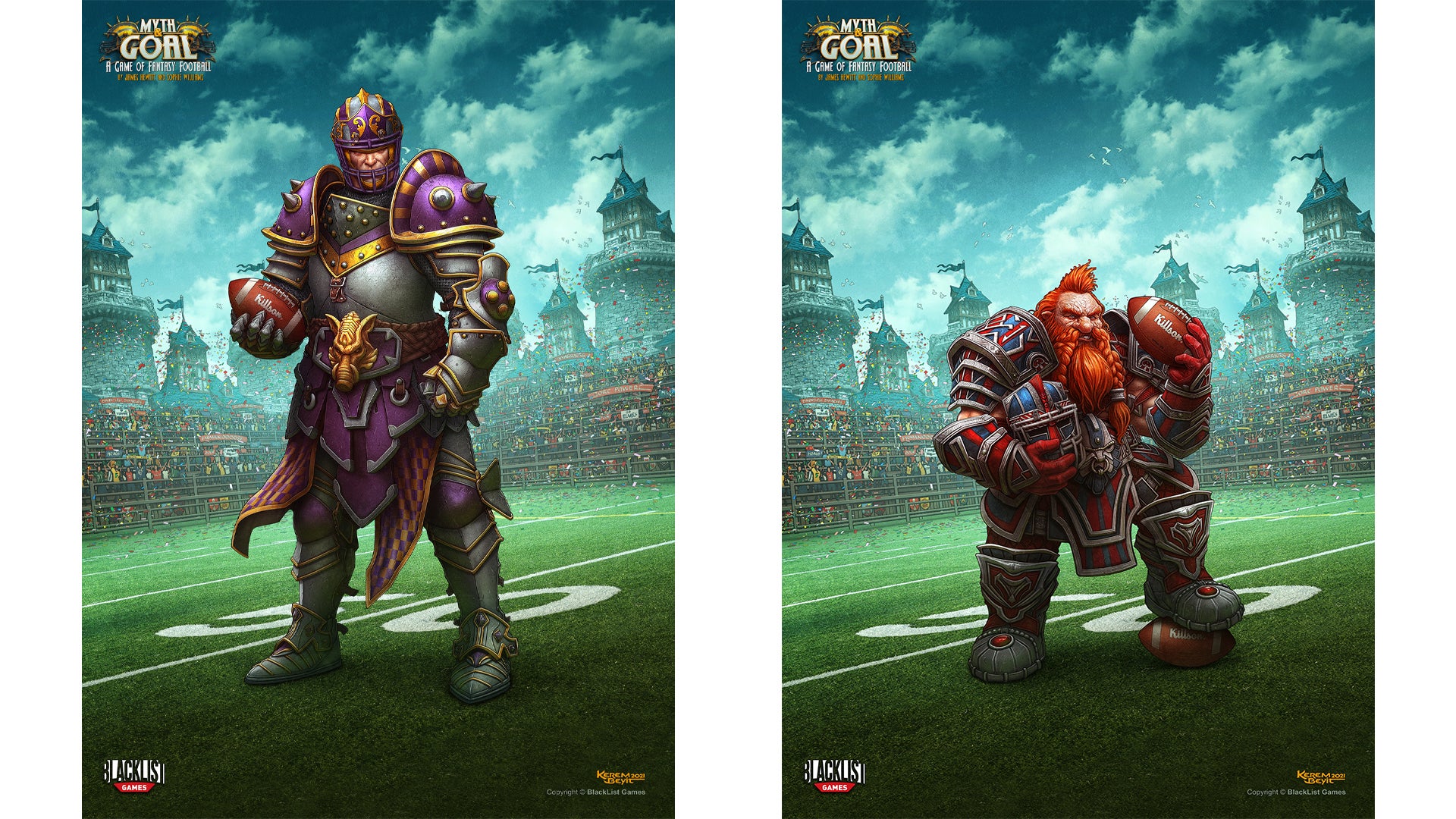 Players can also draft characters from other factions, using miniatures as free agents. Each team set will comprise 16 models - eight to use as a full team for a match, with eight spare figures to be used as free agents. The game may also include rules for creating a custom team comprised solely of free agents.

Myth & Goal will be published by Blacklist Games, following a Kickstarter campaign planned for launch this summer. While the exact contents are yet to be finalised, the core box is said to be a “comprehensive” offering, with Williams and Hewitt insisting nothing has been held back for future expansions. Stretch goals will include additional miniatures. 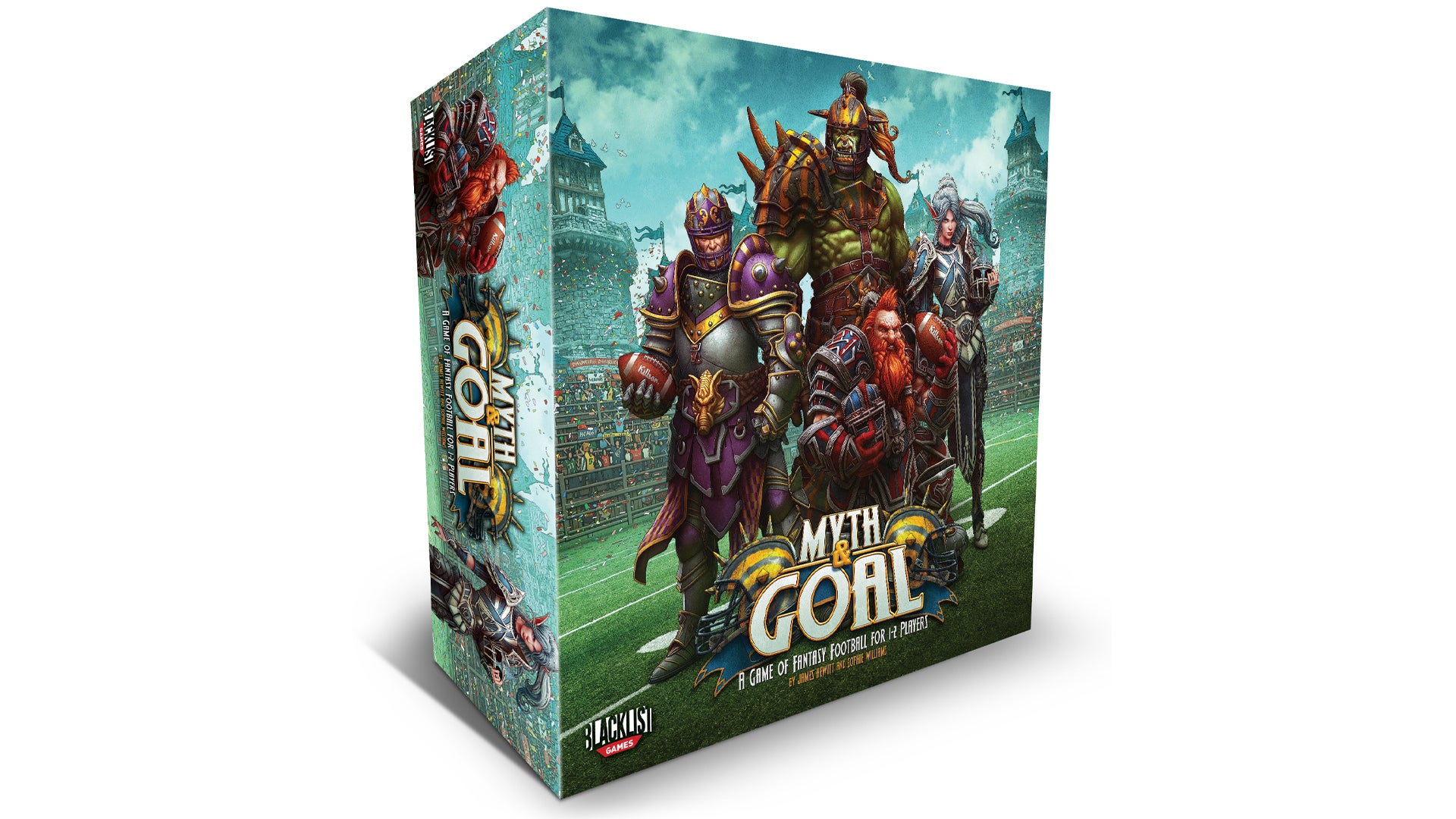 The core set will include rules for league play and an “integral” single-player mode, with the solo AI system driven by the combination of the opponent’s team type and reputation - an aggressive human team will play very differently from an agile dwarf team, for example.

While named star players are not expected to be offered in the first wave of releases, Blacklist said that “longer-term plans” for Myth & Goal could include specific characters.

An exact date for the Myth & Goal Kickstarter is yet to be announced, with a price and release date also to be confirmed.

Myth & Goal wants to be a very different kind of fantasy football game... 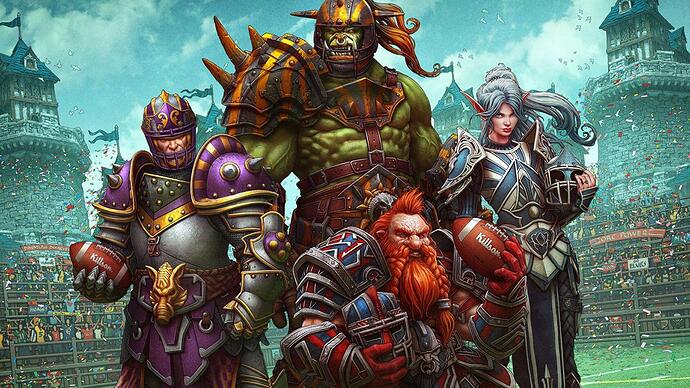 Myth & Goal wants to be a very different kind of fantasy football game...