Ever since we announced Transhumanity about three years ago, we haven’t really disclosed any further details on the project, and if you have been checking this page every now and then, you may have realized that the expected release year has been moved first to 2021, and now 2022. In this post, I would like to break the silence and tell you a little more about the status of Transhumanity, and reassure everyone that eventually, it will see the light of day

For the past three years, the project has been pushed to the sidelines because of two things:

1. The scope of Perseverance. Back when we announced Transhumanity, we had already begun working on Perseverance, but the episodic concept had been nowhere in sight - what we had back then were the very basics of today’s Episode 3. The original plan was to progress simultaneously with the two projects, but when we decided to go with the episodic approach and turn Perseverance into a series of four games, it became clear that the team will need to focus on that project much more to finish it within a reasonable timeframe. There is still a lot to do regarding Perseverance, but much of the game design is done, and with our recently expanded team, we are ready to resume the design and development of Transhumantiy.

2. This kind of game is a first for us. If you have been following our work, you probably know that the story-driven co-operative campaign game genre is a new territory for us. It is also one with an extremely strong competition and many outstanding games. Although we do have some good out-of-the-box ideas and a strong vision of the theme and setting, we felt that we need to do more research and drew more inspiration from the genre before we commit to a design. We’ve been doing this on and off for the past few months, and we feel we now have a much clearer picture of how to make Transhumantiy fit the genre while also being a unique take on it.

So as a conclusion, work will soon resume on Transhumanity and it will gradually become our main focus as Perseverance is nearing completion. I cannot commit to or even estimate a release date for the project yet - we are aiming for a Kickstarter campaign in 2022, but we will take all the time necessary to make sure that we deliver an amazing game that we are all proud of.

we are aiming for a Kickstarter campaign in 2022 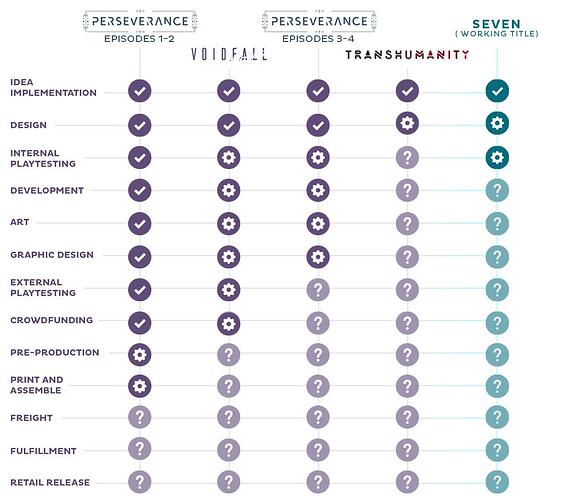