The ALIEN tabletop roleplaying game will be a beautifully illustrated full-color hardcover book, both presenting the world of ALIEN in the year 2183 and a fast and effective ruleset designed specifically to enhance the ALIEN experience. The game can be played in two distinct game modes:

Cinematic playis based on pre-made scenarios that emulate the dramatic arc of an ALIEN film. Designed to be played in a single session, this game mode emphasizes high stakes and fast and brutal play. You are not all expected to survive.

The rules of the game are based on the acclaimed Year Zero Engine, used in award-winning games such as Tales from the Loop and Mutant: Year Zero, but adapted and further developed to fully support and enhance the core themes of ALIEN: horror and action in the cold darkness of space.

The year is 2183—little more than three years since the destruction of the Hadley’s Hope colony on LV-426, the disappearance of the USS Sulaco, and the closing of the prison and lead works on Fiorina 161. The loss of the Sulaco’s Colonial Marine unit along with these Weyland-Yutani sponsored outposts, and the implications of corporate foul play stemming from these incidents, have created an air of distrust between the company and the United Americas.

To add fuel to the fire, conflicts between the rival sectors of space have increased exponentially in the past five years. While unconfirmed, many believe that Hadley’s Hope was a test site for one of Weyland-Yutani’s bioweapons and that an enemy state sent a warship to nuke it from orbit. Others believe that the Company is working with a rogue nation to assume control of the colonies on the Frontier.

The Xenomorphs are coming to game night! The PRE-ORDER for the official ALIEN RPG is now LIVE at ALIEN-RPG.COM - hurry over there NOW!

The full game will released by the end of the year, but if you pre-order you get access to a 168-page Cinematic Starter Kit PDF including a complete scenario WITHIN DAYS after purchase and can start playing IMMEDIATELY.

By taking part in the pre-order you can also provide FEEDBACK on the game before the core rulebook goes to print, and thereby help us making the game even more awesome – and be credited as an official playtester.

This is not a review for the Alien RPG. 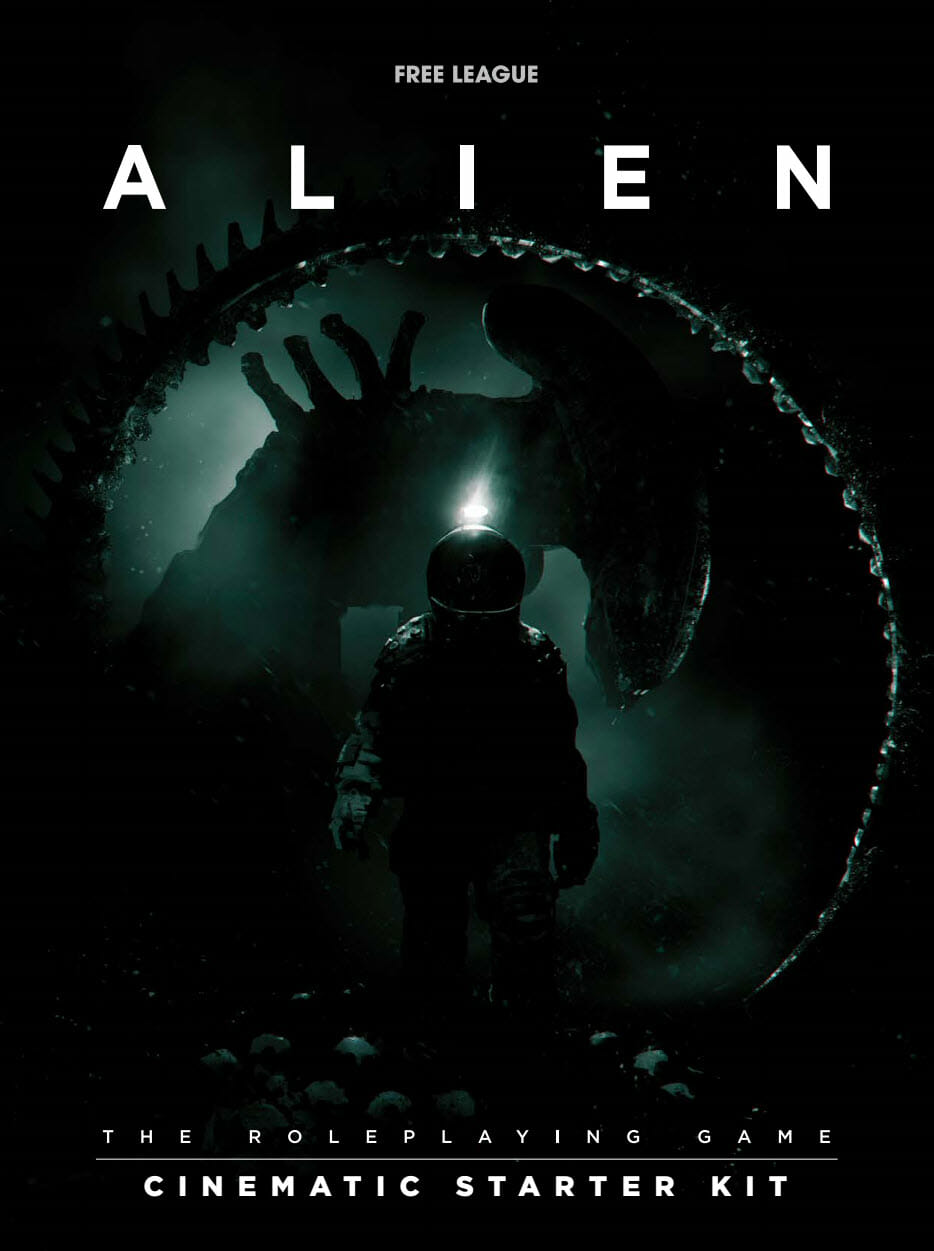 I pre-ordered the deluxe edition of the Alien RPG and that got me same-day access to the PDF copy of the Cinematic Starter Kit for the game.

This is a review of the Cinematic Starter Kit for Alien.

The Alien RPG has two modes of playing; the Cinematic with one-shot scenarios based on the deadly movie, and Campaign Play where you can level up characters because, maybe, they survive.

The first sentence in the Alien Cinematic Starter Kit is “Space is vast, dark, and not your friend”. That sets the mood for things to come.

And yet, the Cinematic Starter Kit keeps Alien’s powder dry. I’ve not seen the character generation rules. Nor have I had the chance to peek in horror at the stats for the iconic xenomorph. I still need and want after devouring the Starter Kit.

Simply put, the Starter Kit delivers on its promise. I can play Alien in Cinematic mode. I’ve all the rules I need, and those rules don’t include character generation because all characters are pre-genned in Cinematic version of the game.

There are no Dungeon Masters or Gamemasters, narrators, storytellers or even directors in the Alien RPG. There are Game Mothers. I love it. That’s both a nod to the evolution of RPGs, the compelling female characters in Alien (including the Queen) and it feels accurate too. In the hot chair, running the game, we are birthing a living thing.

What caught me by surprise is, even in Cinematic, as Game Mother we’re running a game that draws heavily on skirmish miniature games and even computer games like Halo and Destiny.

I usually enjoy my roleplaying in the theatre of the mind. I accept the argument that for Alien RPG that a battle grid or game map will be beneficial. Line of sight matters, movement matters, the precise location of one character to another is often essential.

Dear players, don’t let words like ‘cinematic’ and ‘story’ fool you. In this style of play, Alien will challenge your tactical genius. You’ll have to think carefully about the maps the Game Mother shows you, you’ll to negotiate alliances, and you’ll have to take risks.

A brief discussion on Alien mechanics

The risk economy is part of every dice roll in Alien. When you roll your base dice (attribute + skill), you also roll stress dice equal to the amount of stress you have. Only 6s count as a success on the base dice. If you don’t get enough 6s to complete an action, then you push your roll. A pushed roll automatically increases your stress by one point, and that new stress total is counted in your roll. If your stress dice ever roll a 1, then you’ve panicked. 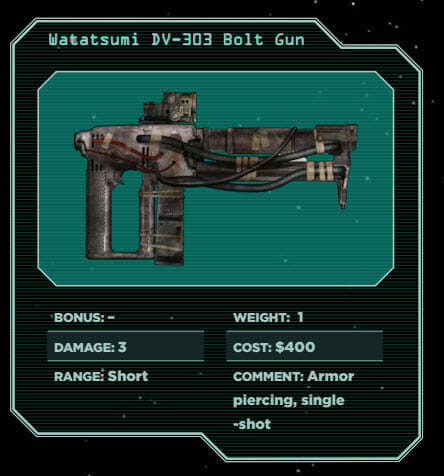 To have a fair chance of succeeding in most situations, you will likely need to push your roll, and your stress will increase.

You don’t usually count ammo in Alien. Bullets are commonplace. If you panic, though, then you stop firing. You may have been too careless, you may have jammed your gun, but you’re going to need to take a second to get your shit together and your weapon back online.

Stress is going to happen in Alien, and while you just need a few minutes or calm to relax and rid yourself of it, I suspect it’s going to be one of the many killers out there in the darkness of the void.

Synthetics, which you can play, which the person sitting beside you might be playing in secret, don’t need to make stress rolls. They don’t panic.

I mentioned how Alien has elements in it that remind me of computer games like Destiny. In those games, your defence shields regenerate automatically. Survival sometimes boils down to finding a safe area to catch your breath. In the Alien RPG, you recover health and lose stress in the same way. It’s automatic when you’re resting.

I think this bold, brave, but also right. Alien isn’t a move about being slowly worn down. If you die; it’ll be sudden, dramatic and traumatic. If you can just get away from the xenomorph then, most likely, you’ll be able to regroup and reconsider. That’s exactly what the mechanics here encourage.

The critical injury rules are how the RPG handles those spectacular and often messy encounters with deadly aliens.

Another feature of Alien that aids both the Game Mother and the tension of the setting are ‘Buddies and Rivals’. Your character has one buddy and one rival.

On Cinematic play, PvP becomes quite likely. All PCs have secret agendas, and most PCs will want to live, at all costs. In the Cinematic style of play, as the tension increases and characters turn against each other, the GM can declare a scene as ‘PvP’.

Once that’s done; one character will be leaving the game.

At the end of the scene, the character who comes off least well has “turned trailer” and becomes an NPC controlled by the GM. They’ll likely be back as a villain. The player can be given a new PC from the pool of pre-genned characters if there is one free.

Cinematic adventures are divided into three Acts in the Alien RPG. It’s the third act where the true PvP is saved for as that’s because it’ll likely cost you your character. If you act against the interests of the group and do it too soon, you’ll get ganged up on, and you’ll be out. There’s no such rule for Campaign style games.

The RPG is set as tensions on the Frontier increase, and rumours of deadly aliens begin to circulate across the colonies. We’re given a timeline, which is helpful, but I wish I could do a better job at mapping it to the alien films.

The four political powers are; Three World Empire (formerly the UK, Japan and some developing countries), The United Americas (North, Central and South America), The Union of Progressive Peoples (Russia, Vietnam and socialist block countries) and The Independent Core System Colonies (a collation of privately-owned worlds).

There are more powers than just the political, though. Multi-nationals like Weyland-Yutani, BioNational and Seegson are incredibly influential. There are religions too which includes new churches with scary motivations such as the Practitioners of the Holy Immolation and Church of Immaculate Incubation.

It’s 2180, the Colonial Marines are being re-deployed, and it is a dangerous time to be alive.

Characters don’t have to be Colonial Marines, though. They can be brave Frontier Colonists or plucky Space Truckers. They might even be Company Reps.

Free League takes a minute to remind us of the key themes we find in Alien; space horror, sci-fi action and sense of wonder. I’m glad they did and I’m especially pleased they kept the wonder in there as I remember peeking through my fingers in awe at some of the scenes in the first Alien film.

Chariot of the Gods

Right at the end, but a hugely important part of the Starter Kit, is Chariot of the Gods. This is the adventure and characters that allow you to use your newly acquired understanding of the Alien RPG system.

The starfreighter USCSS Montero has been diverted to check out the distress beacon from the USCSS Cronus. The Cronus is a science ship that has been missing for nearly a century.

What could go wrong?

The GM is given an overview and then a look at the characters. Later on, in the appendix, we’re given the one or two line summaries for each hidden agenda those characters had. They evolve with each Act of the campaign, becoming more direct, demanding and full-on each time.

It looks like an easy game to run. It will be short. For a short while, I did wonder whether it edged into railroading… but it doesn’t really. It’s just really mean to the PCs at times, and since this is a one-shot adventure set in the Alien universe, that’s okay.

I wish it had more illustrations. I want to see some of the horrors described in Chariot of the Gods. I love the maps of the spaceships, though, they’re easy to read and look precisely like the tech I remember from the films.

I’m very impressed with Cinematic Starter Kit for the Alien RPG. It’ll be a great way to learn the game and an acceptable way to pass the time while we wait for the main book to hit the printers. 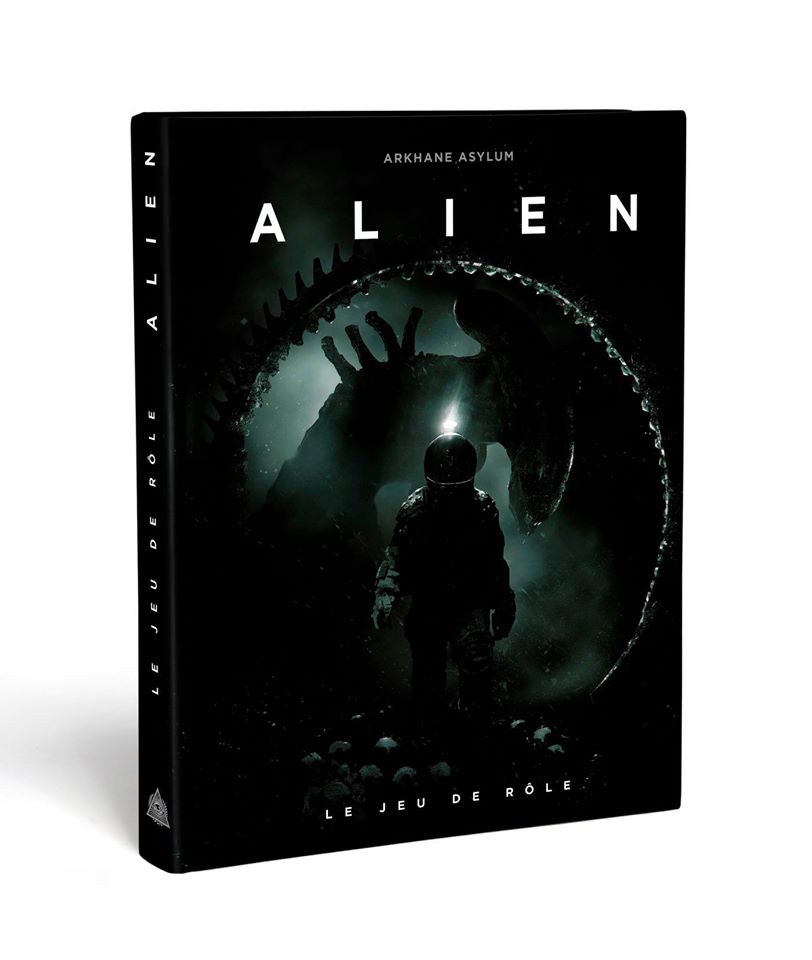