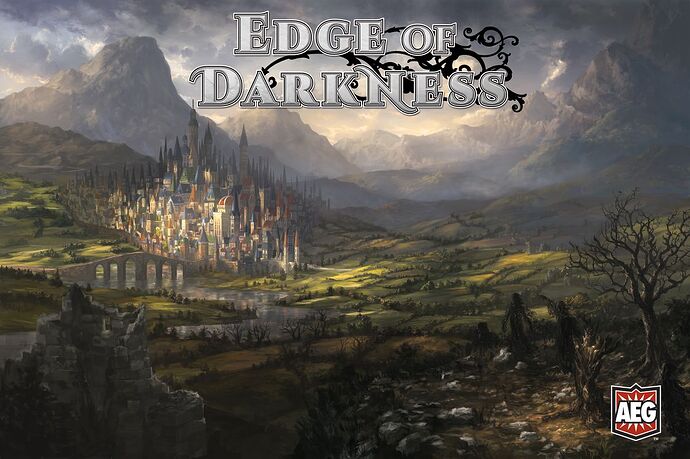 On February 20th at noon (EST) Alderac Entertainment Group will launch the Kickstarter for the most ambitious tabletop game it has ever published.

That game is titled Edge of Darkness. It is designed by John D. Clair, designer of the ORIGINS Award Winning Mystic Vale. Graphic design and primary illustrations by Alayna Lemmer-Danner.

Edge of Darkness is a medium-weight game for 2 to 4 players featuring card crafting, worker placement, shared deckbuilding, and a cube tower Threat system. The game is modular to provide extensive replayability.

In Edge of Darkness players take the roles of leaders of powerful Guilds inside the city of Aegis beset by powerful evil forces determined to destroy it, known collectively as the Blight. Aegis exists in the same world as Mystic Vale, although in a different region of the world. The players must compete for resources and attempt to exert control over the various critical areas of the city in order to build support within Aegis while defending against the attacks of the Blight. The game is played in rounds, and ends after a set number of rounds have passed. The winner is the player that has amassed the most Victory Points.

Highlights of the game include:

I had a chance to play a full game of Edge of Darkness at PAX Unplugged and wanted to jot down some quick impressions for those looking for information.

Card Crafting
I played Mystic Vale when it first came out. I found the card crafting mechanic interesting and fun, but the game wore out its welcome after only a few plays. Unlike MV where the mechanic is the entire game, the card crafting in EoD is only a part of the gameplay. Another thing that sets it apart is that you actually build enemies at the same time you build your deck. The reverse side of every card is an enemy that may attack you, and every time you insert a plastic addition, you make the enemy stronger.

That Tower Thing…
Speaking of enemies, that plastic tower is what determines what enemy attacks and who it targets. Each player draws cubes from a bag each turn and drops them into the tower. The colors get randomized and when 7 cubes accumulate on an enemy, it attacks the player with the most cubes on it. After the attack resolves, the enemy is discarded and a new card is drawn from the bottom of the common deck and flipped to its enemy side in the empty space. Remember that awesome card you built with all three spots filled to give you a super-turn? It’s now a 7-point monster poised to rain destruction on you.

Worker Placement
At its heart, this is a worker placement game. There are 10 locations each game and I was told there will be many to chose from when the game launches. These spots allow you to attack enemies in the aforementioned cube tower, defend from impending attacks, draw money from the treasury, add workers, claim neutral cards, etc. Each player drafts their hand from a common deck and adds one insert to one card each round. You can draft any card and use any action, but you need to pay your opponents to use cards that bear their insignia. Of course, everything you do will gain or cost you end game victory points.

Overall
After reading some overviews, I was worried that this game would be a jumbled mess, that there would be too much going on. After learning and playing it though, I found the gameplay smooth and intuitive. Turns move quickly and the enemy tower works as a timer that you can use to anticipate and plan for attacks. Our 3-Player game took less than two hours to include teaching and we were taking our turns without help by the second round. Our game played out much differently than any other games played that day even though we all had the same setup. This is the game John D. Clair designed for his card crafting mechanic and it shows. I look forward to seeing what AEG can do with it and will be a day 1 backer when the Kickstarter launches next year.