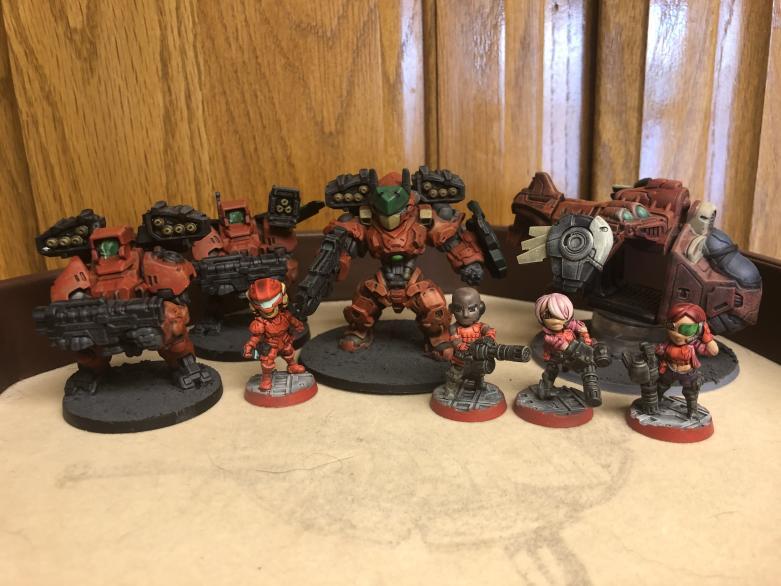 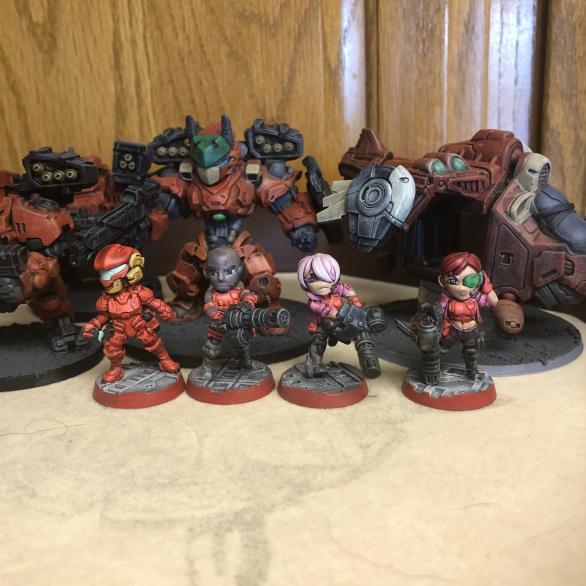 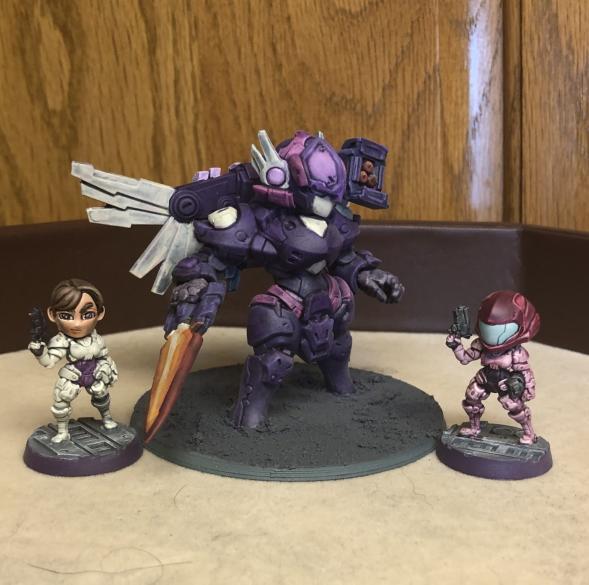 Greetings all! Introducing Ignition Core Games, a US based game development and publishing company. Our goal is to create immersive tabletop miniatures games with a deep thematic feel, without unnecessarily lengthy rule books. Our focus is on tactical skirmish games and JRPG-like board games.

With miniatures at the forefront of these games, we are taking a quality over quantity approach, avoiding repeat sculpts where ever possible. This allows painters to take their time and still get our games to the table relatively quickly.

We are a small company. Currently all our models will be produced in high quality resin from a US based resin caster. This makes mass production and international shipping a challenge for us, but we intend to meet those challenges head on. Our intent is to sell from on hand inventory as much as possible in order to ensure our customers get what they pay for as quickly as possible after payment.

We are working to get our first game, Ignition:Core, into production and available to you. Several more games are in development as well. 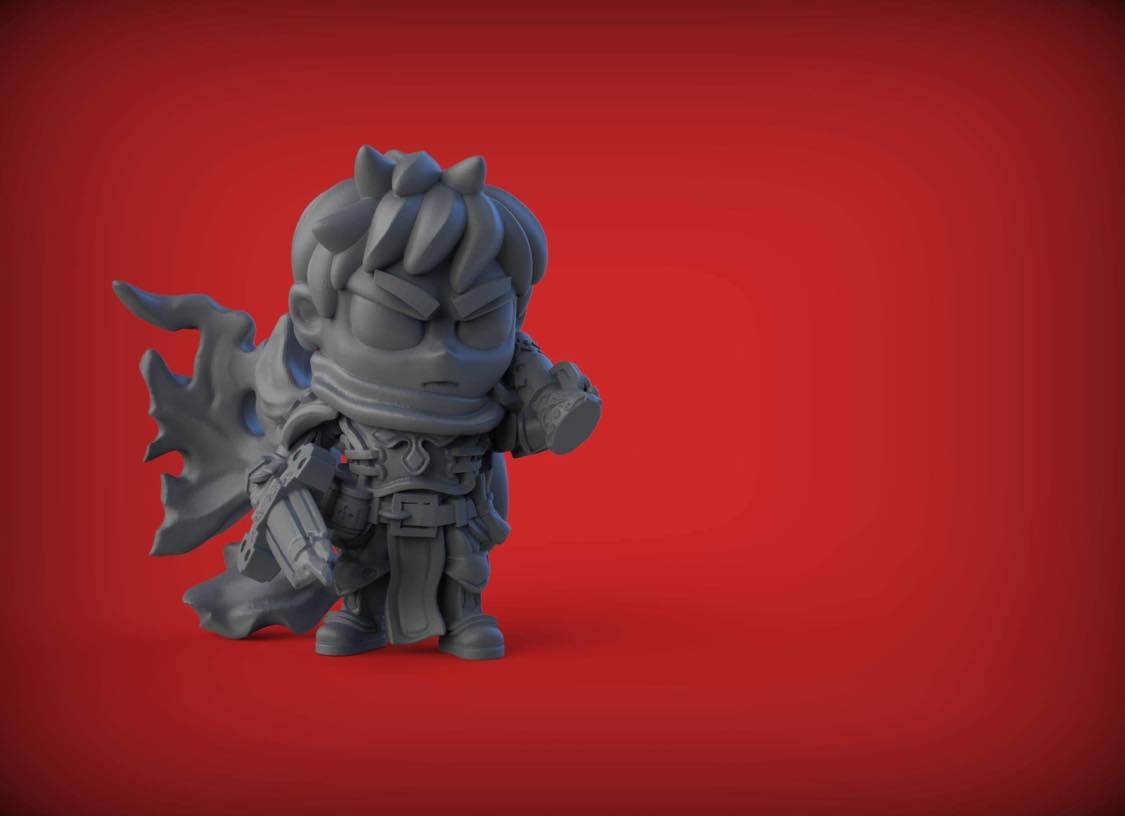 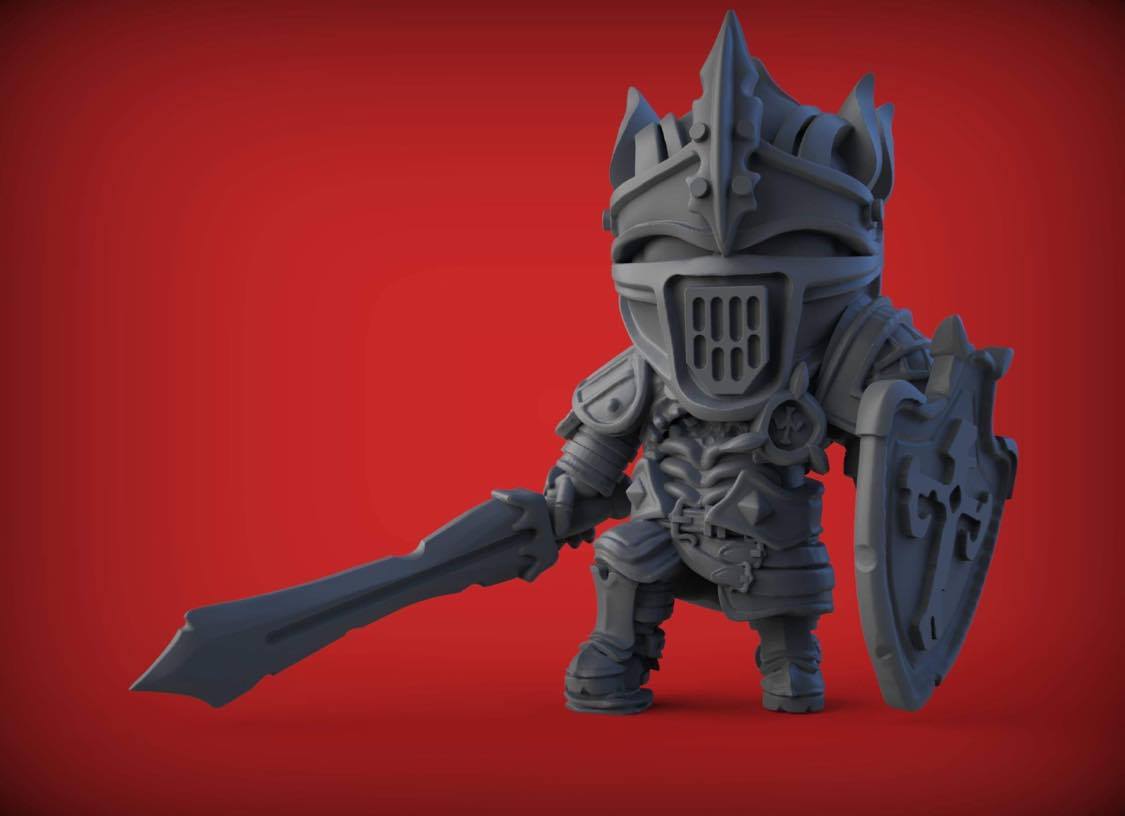 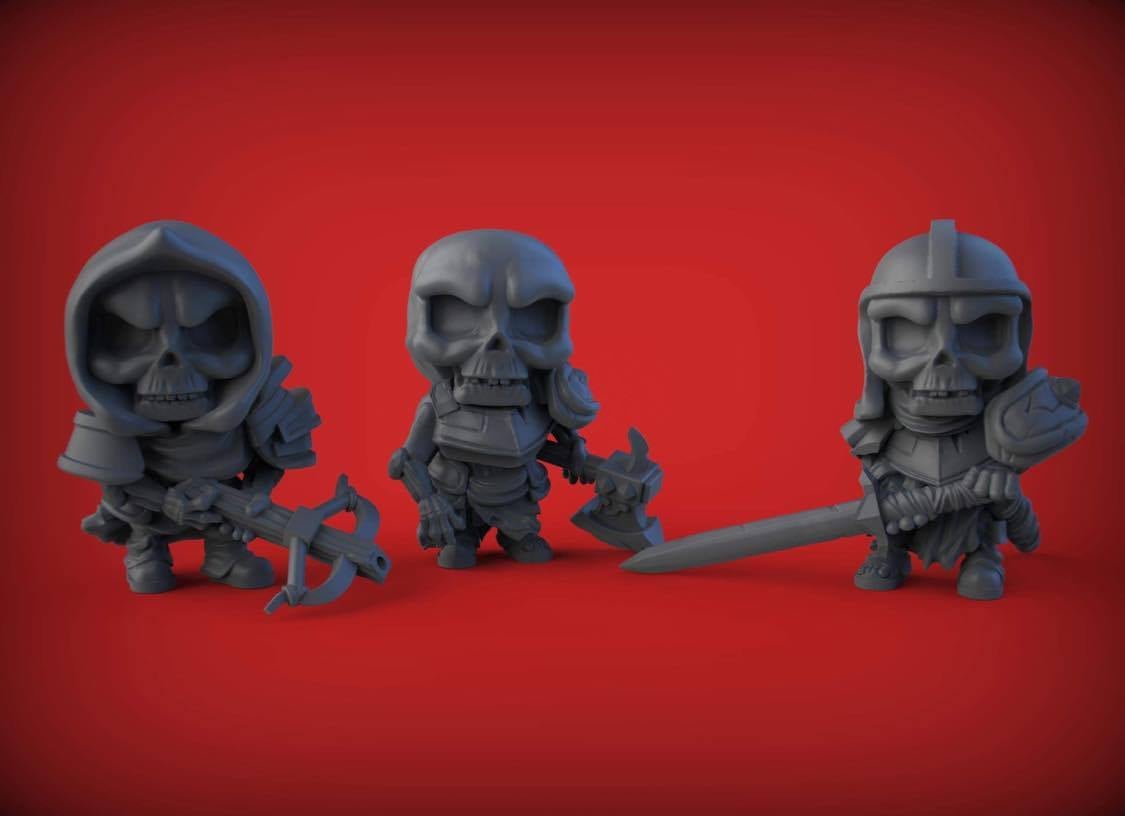 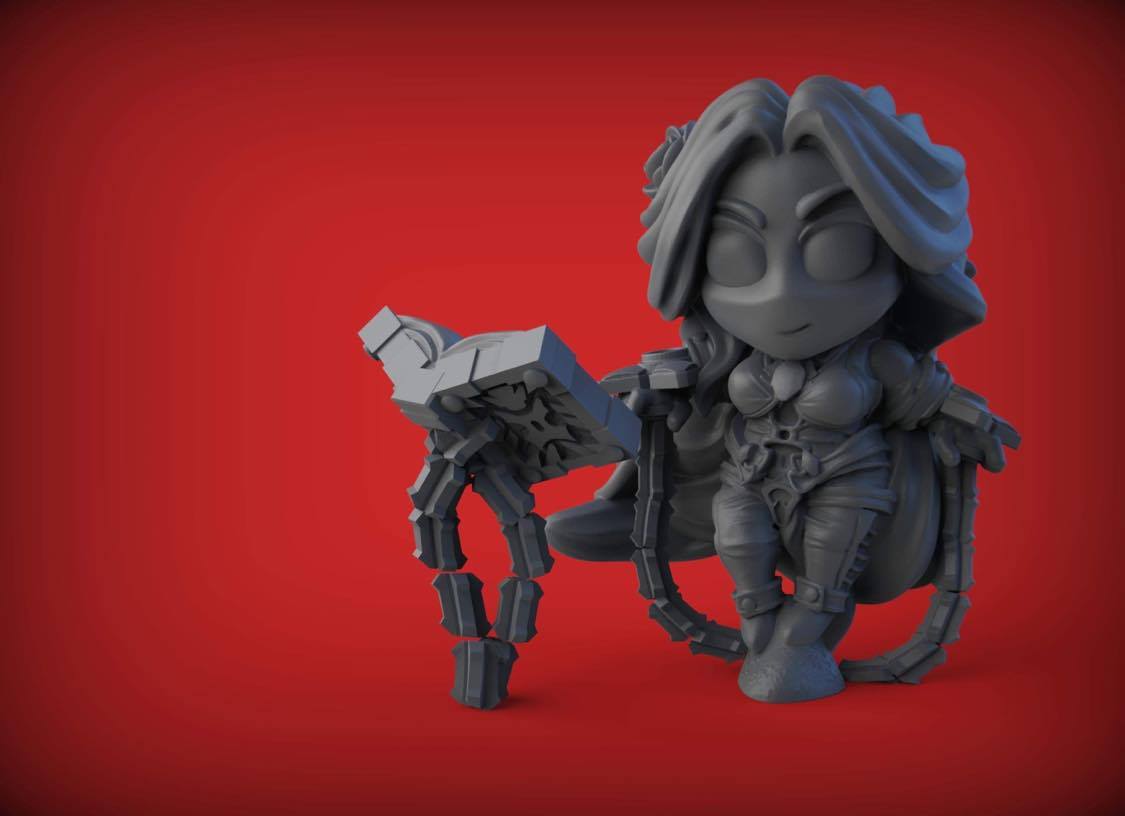 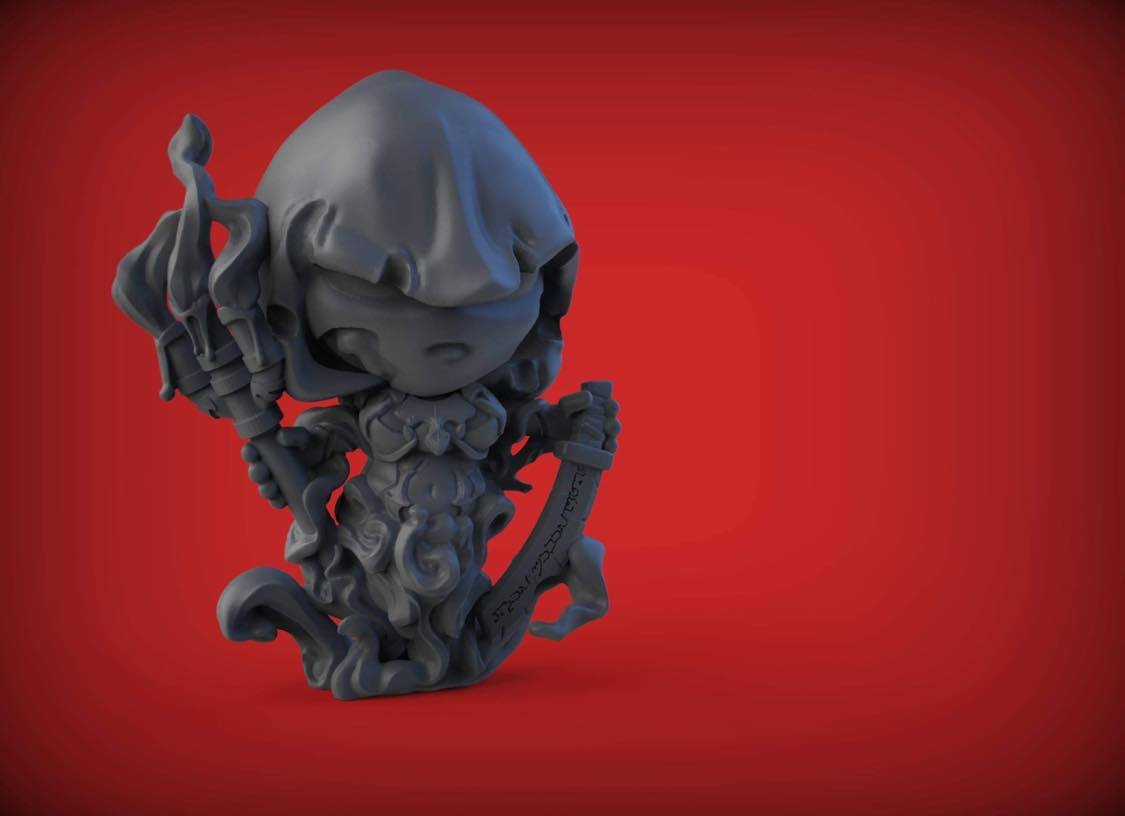 The Ignition:Core deluxe starter set will be available for purchase very soon. We are aiming to have stock for sale on the web store before the end of October. This starter set will give two players a robust roster of mechs, ground troops and a support aircraft for each team. (The web store is currently down for construction.)

We are in the early stages of production. Once all pre-production samples have been approved for quality assurance, our resin caster will start making the first batch.

Small manufacturing update. The 3D files have all been given the green light by the production team. Now We wait for quality samples in the coming weeks.

Creating the ignition:core prototype, and the first glimpse of gameplay.

Greetings all ! Hopefully the weekend finds you well. As we look forward to the first release of ignition:core late next month (pending any delays) I’m certain there are questions about the gameplay behind the gorgeous minis.

Hopefully this post on the prototyping process offers a few hints. We will be making follow on posts leading up to the game’s release spotlighting different rules and mechanics that will allow you to make an informed decision about if ignition:core is a game you would enjoy.

I have constructed, de-constructed and rebuilt this game more times than I can count on one hand, just to ensure the end experience is the most engaging, thematic and tactical experience it can be. Additional details are in the photo captions. Enjoy!

We wanted to theme the data cards for each entry around a blueprint as if each card is a monitor. This image comes out dark on the printer and our graphic designer is lightening this for the final version. These components will be PDF print and play at launch to keep costs down for you.

The current footprint of the ignition:core prototype. The rulebook will be short, teaching you gameplay structure, activation sequences, initiative and how to resolve an attack action. Any information beyond that is on your data cards. In playtesting we have observed that the basic rules are picked up very quickly and gameplay flows uninterrupted by delves into the rulebook. 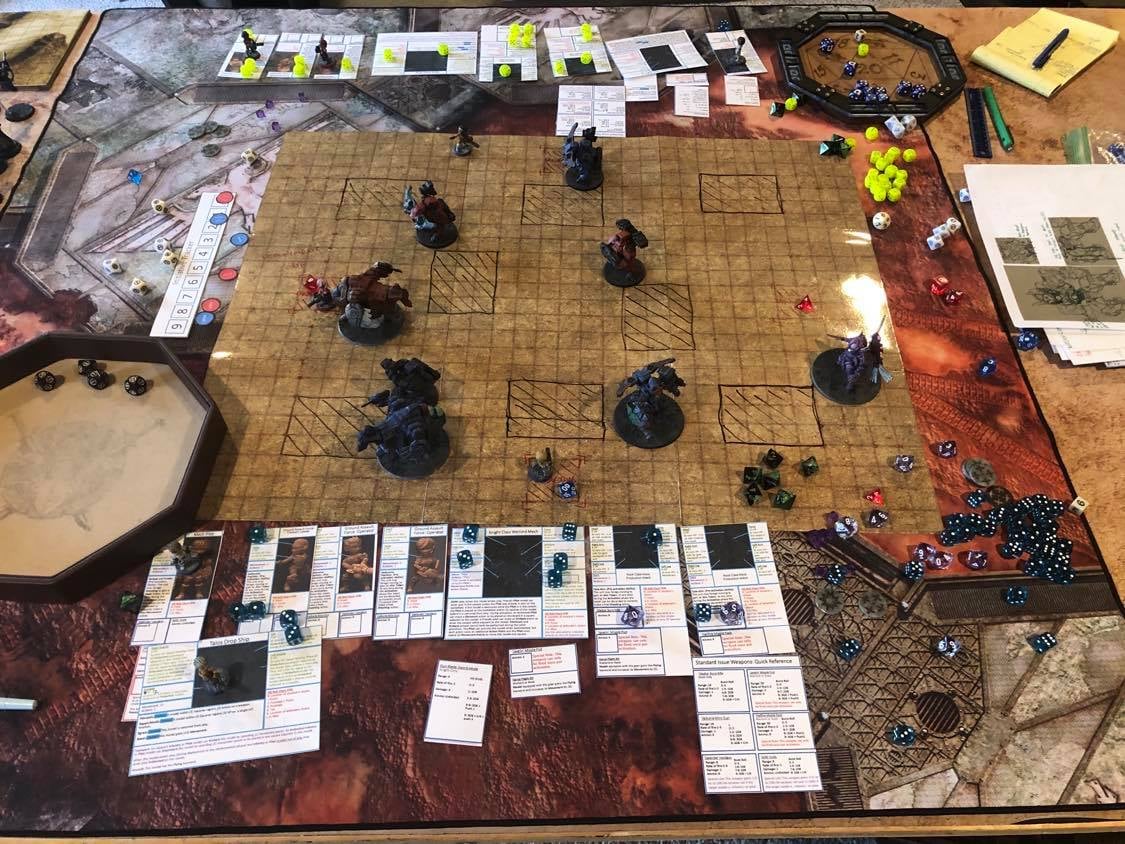 A closer look at a single player’s data cards. Here you track ammo and damage while having quick reference to each unit’s abilities. We streamlined gameplay with the ‹ Standard Issue Wargear › card, a reference card for commonly occurring weapons like the Valkyrie Mini-gun, Defender Hand-gun or Hellfire Missile Rack. 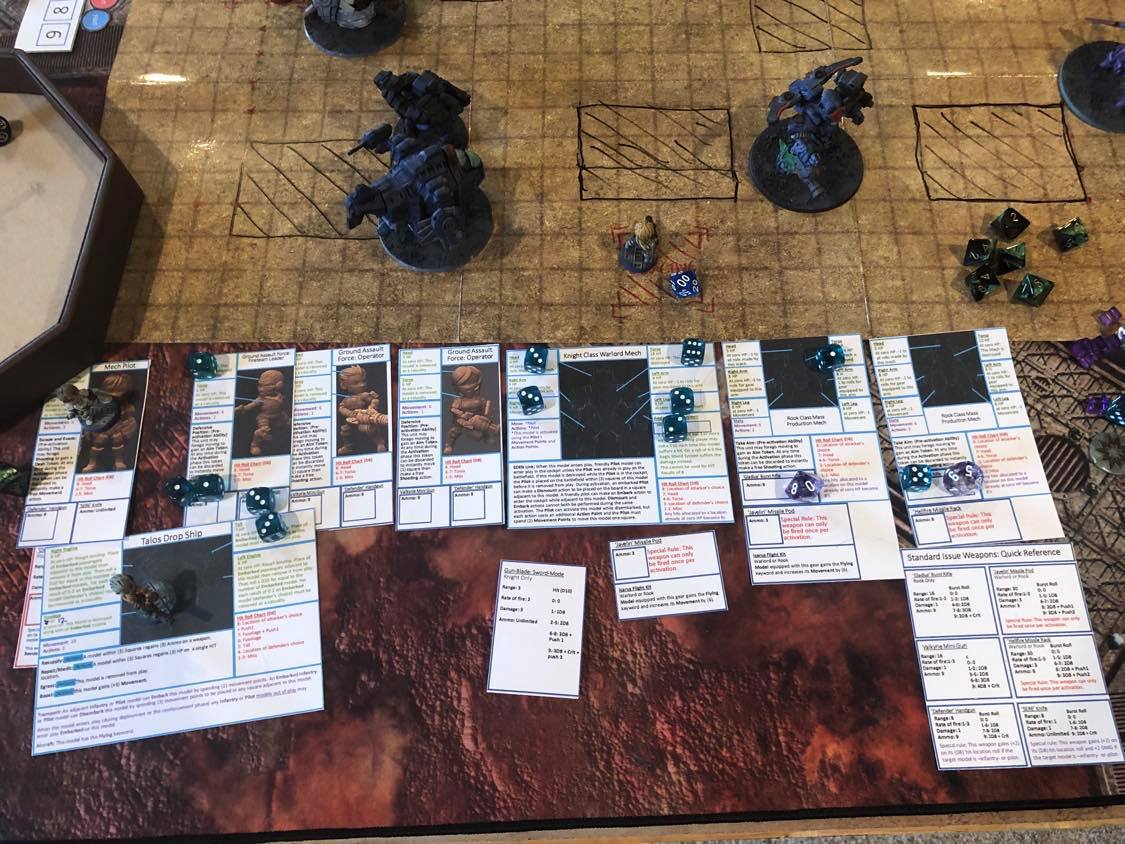 Here is the very first iteration of the prototype. It was clunky, space consuming and had a ton of parts. Still, it got the game to the table. 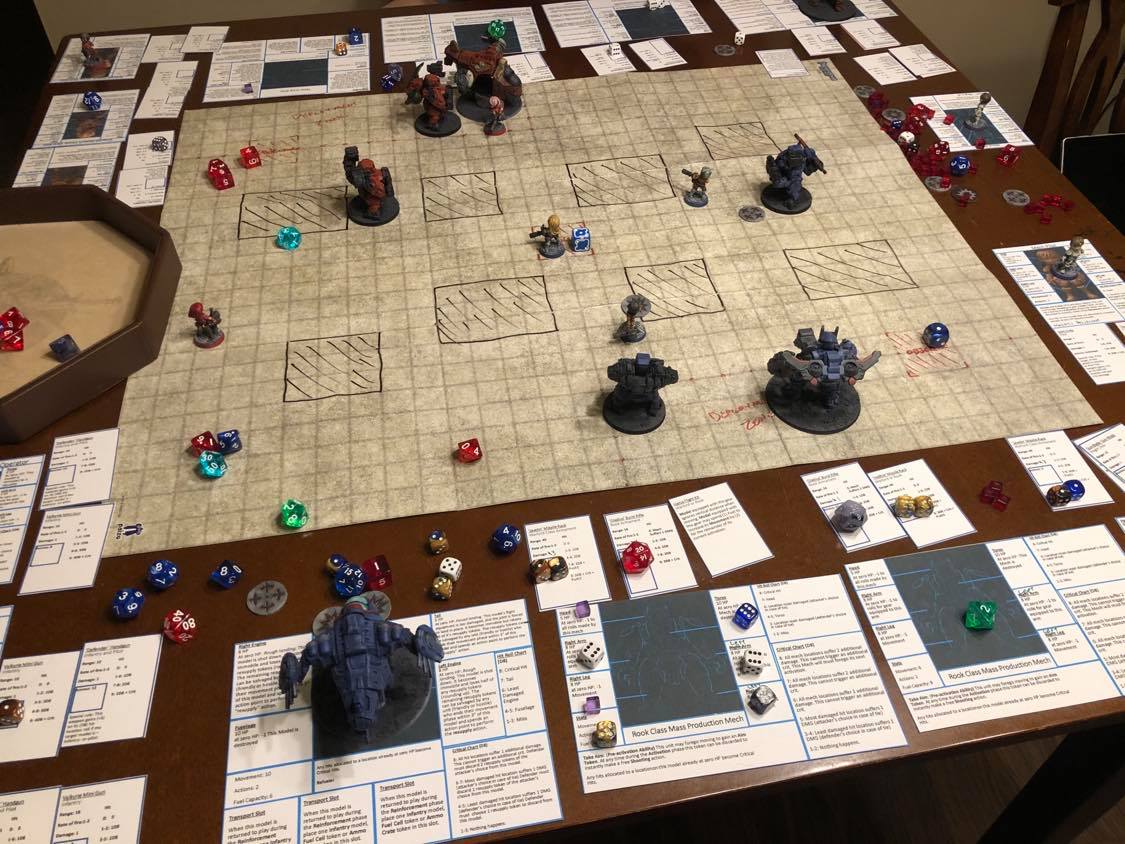 The current data card for the « Rook » support mech (left) vs the original (right). In addition to being way smaller, the newest version is color coded (HP is green, move/action stats are purple, hit locations are red etc…) and the location of each piece of data is standardized from one unit entry to the next. Prior to this we found playtesters were suffering a mental strain as they tried to track data and rules. Simple color coding removed this strain allowing gameplay to flow better. 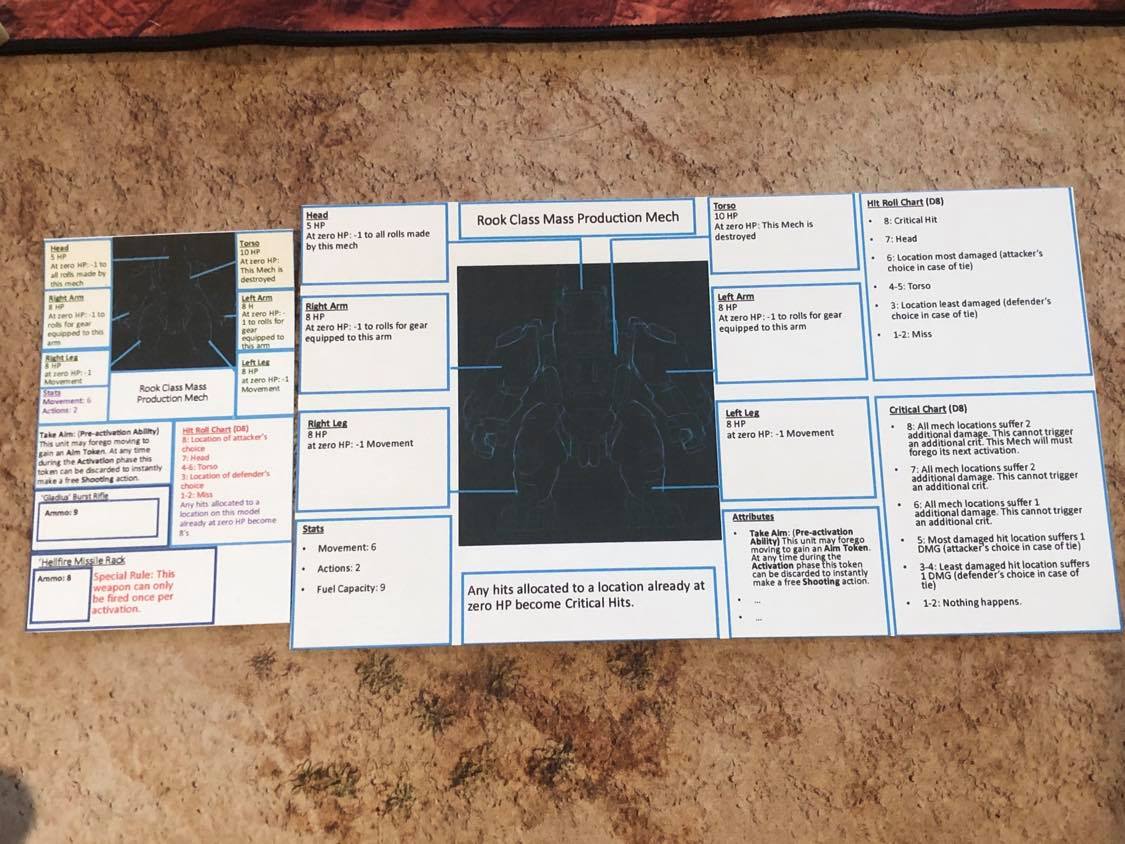 A similar comparison, this time show-casing the « Knight » warlord-class mech. The first versions had a fuel stat and a critical hit location chart. Both turned out to be bloat and were removed. It turns out limiting ammo was sufficient to add a logistics element to the game. Further, we found a more elegant way to add ‹ Crits › that felt rewarding, without the RNG factor making the game feel unfair. (The latter came about after several cheap and demoralizing mech-pilot casualties 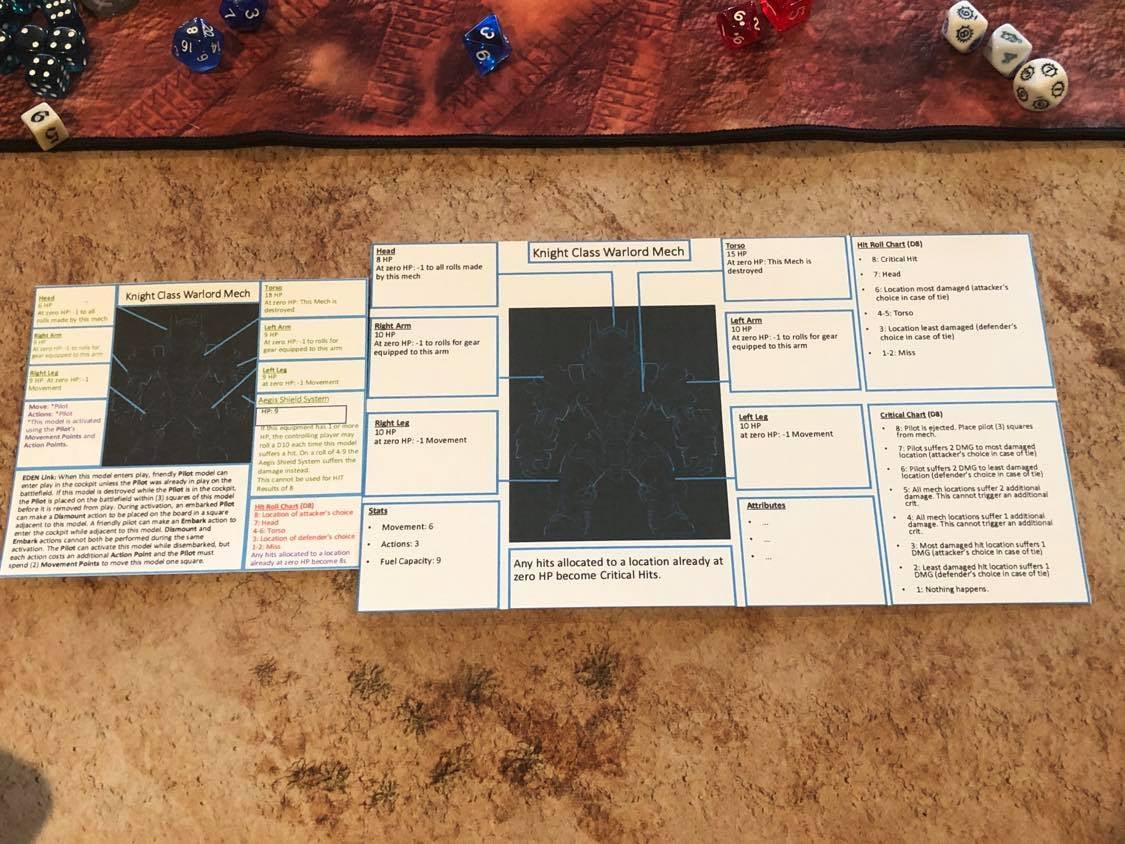 A third example of the current prototype, infantry and standard issue war-gear cards (center and left) vs the older version. We found that for recurring weapons it was better to have a simple ammo tracker on the unit cards, with all the stats consolidated to the war-gear card. Also, infantry were simplified to have two hit locations (head and torso) rather than the six hit locations of the big stompy mechs. I liked the idea of tracking leg and arm wounds for infantry more than I liked it in practice. Ground troops play a crucial role in ignition:core. More on that in a later post 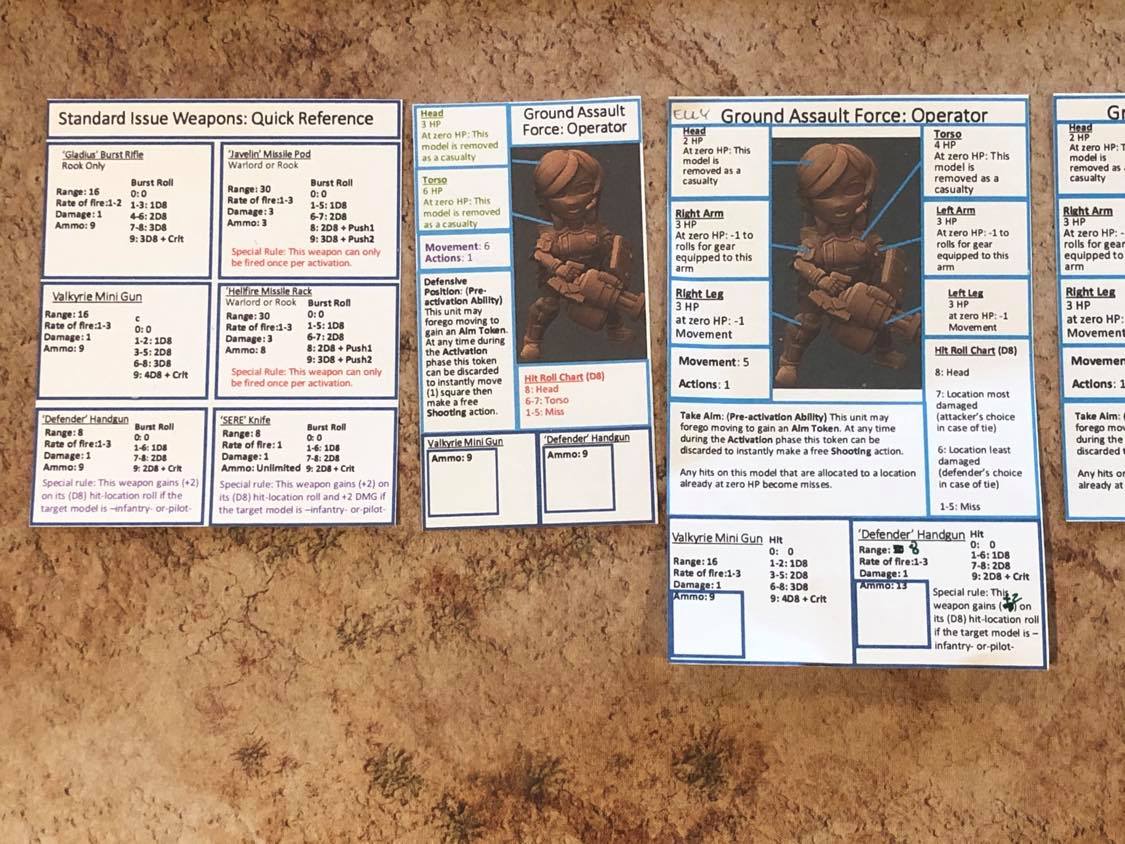 Here’s a closer look at the Knight mech. This may offer some hints about gameplay. This game will be a D10/D8 system, but we found D6s were very handy for tracking wounds. 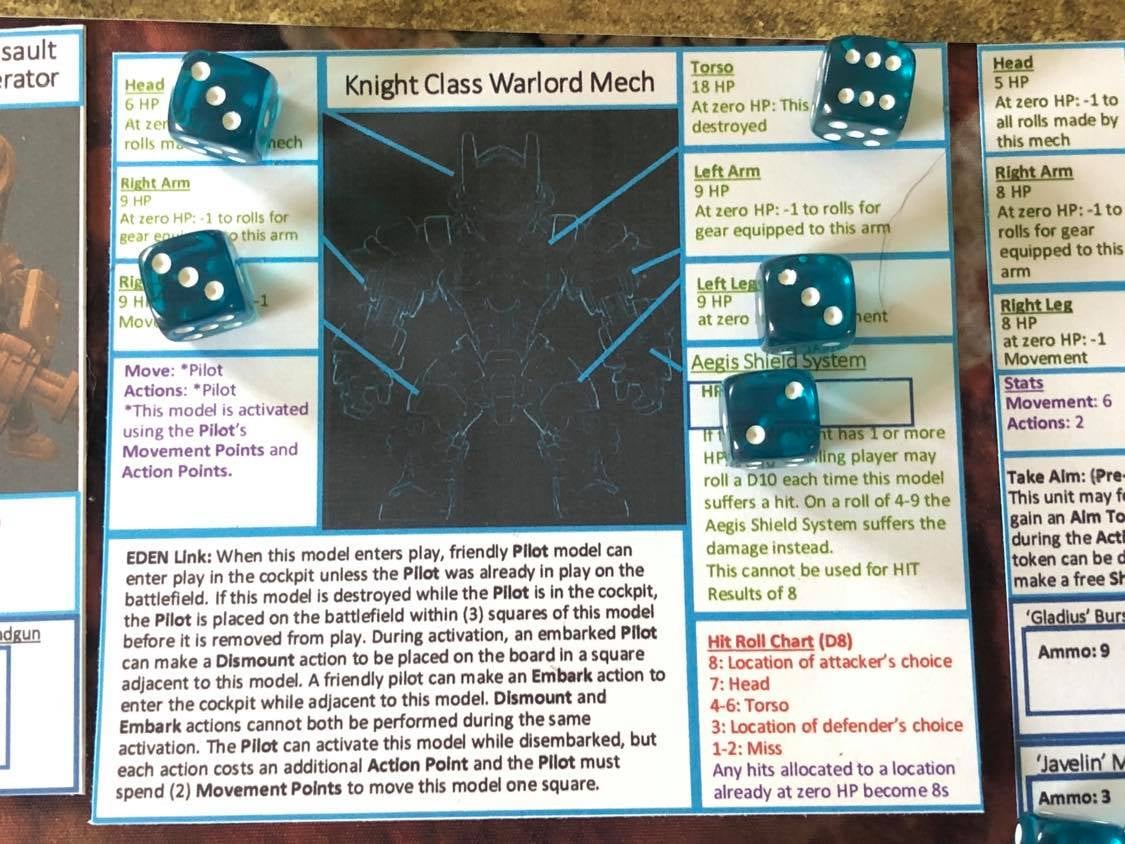 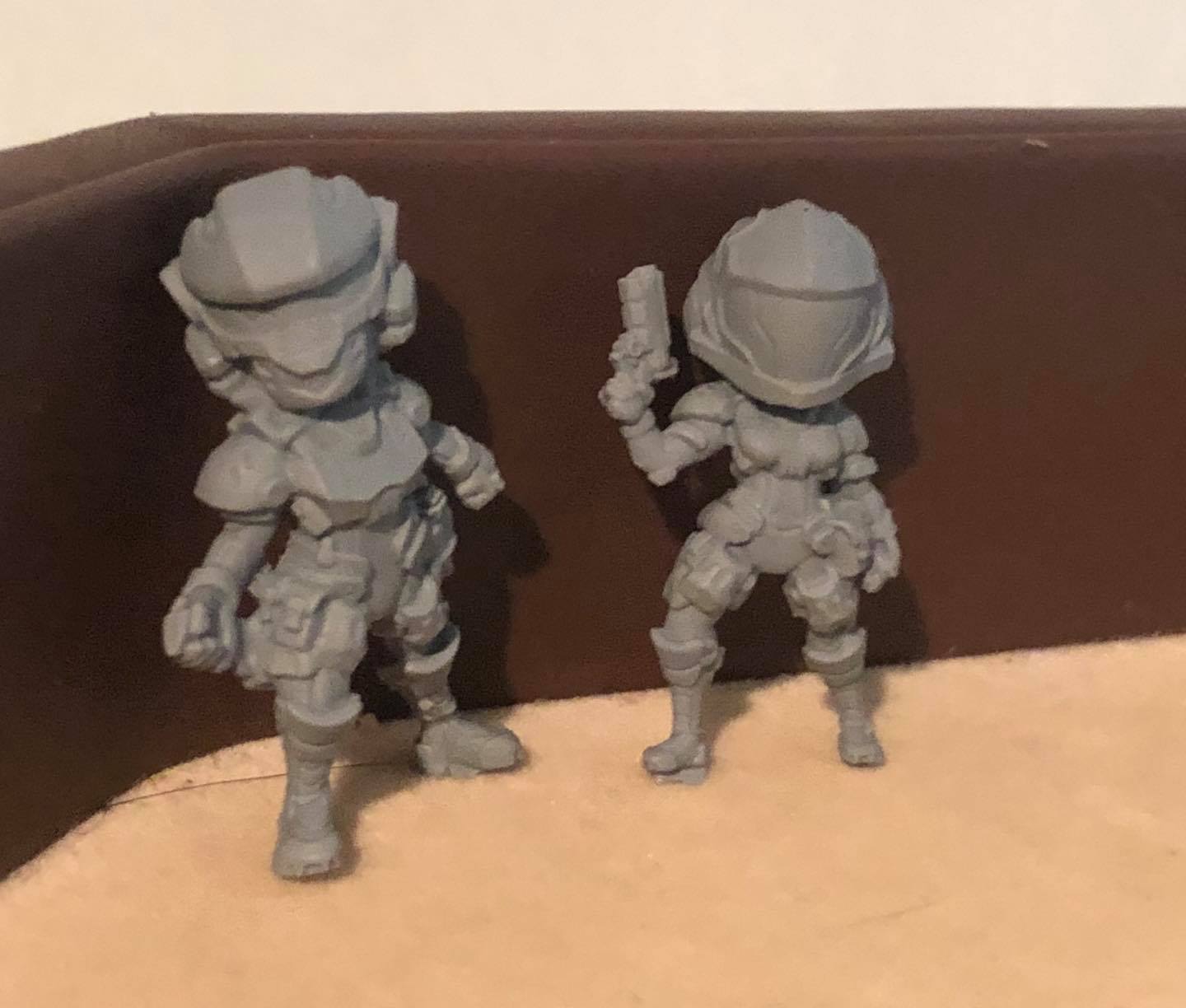 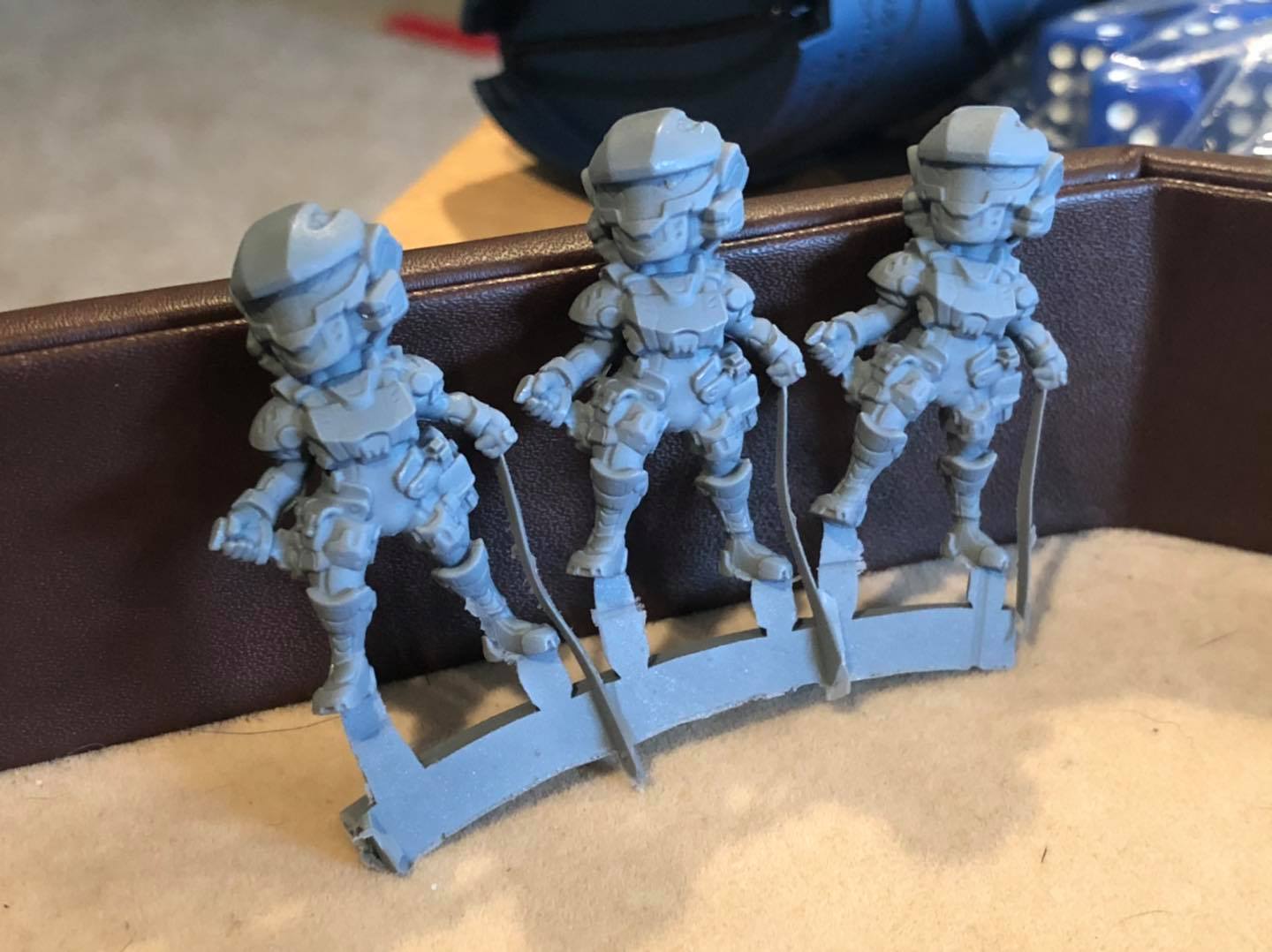 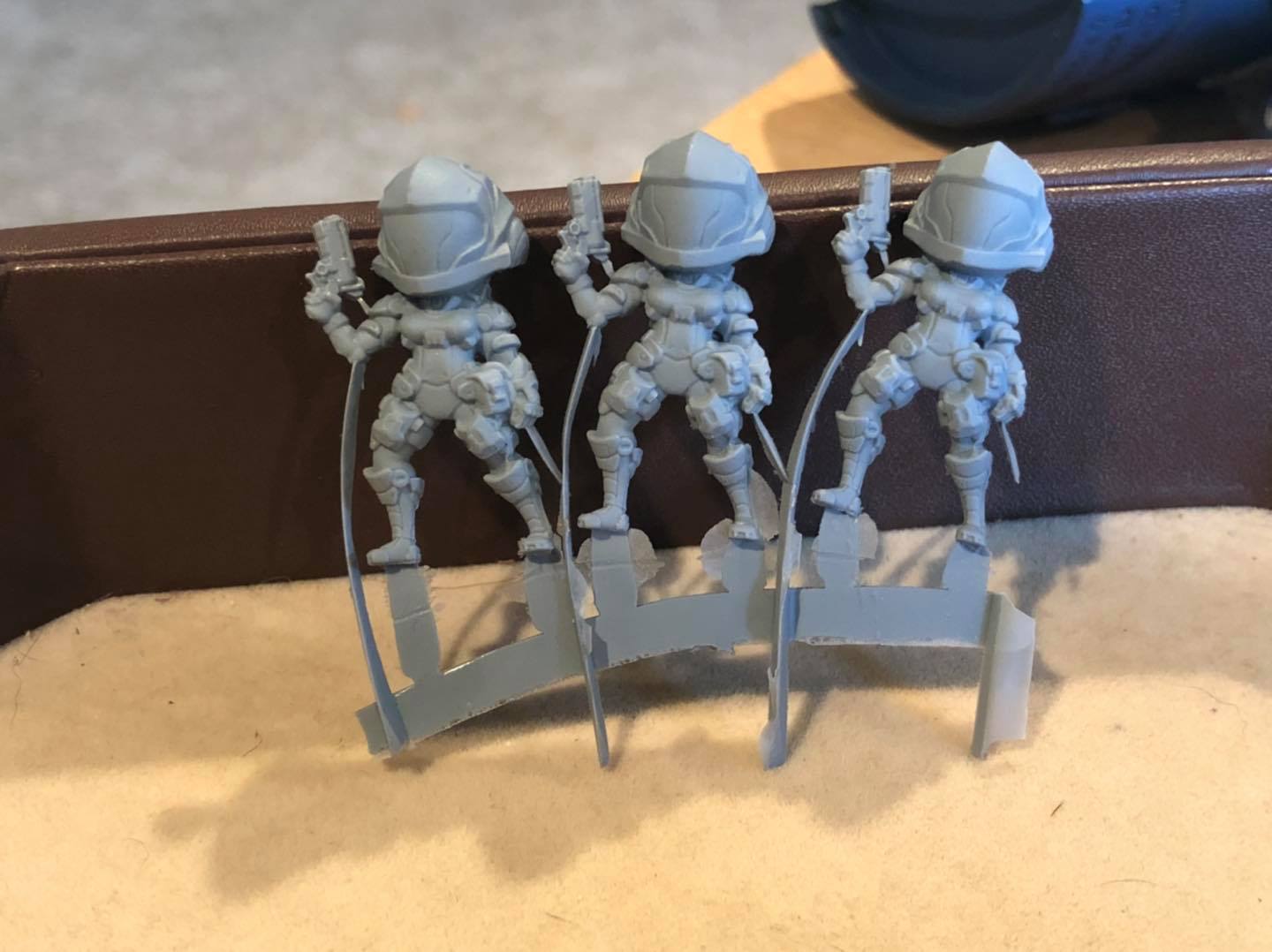 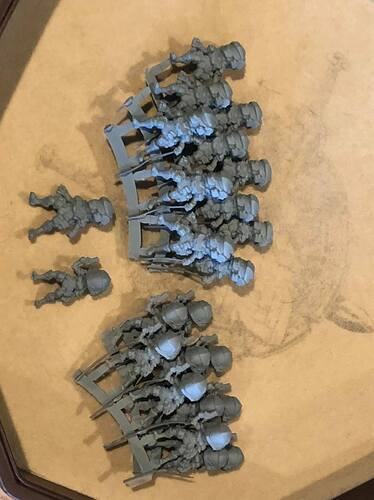 ‹ Blondie › from the Blue-Team infantry squad squares off against a fully loaded missile-rack bearing Rook from Red-Team. Is she too squishy for this task? 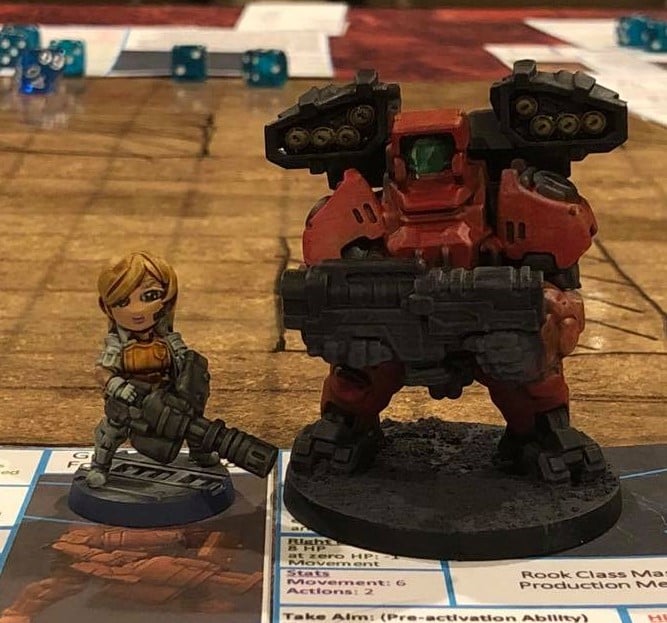 Seizing the advantage, Blondie unloads three bursts from her Valkyrie Minigun. If you zoom in on the weapon stats you’ll see that (aside from the zero that whiffed) the burst roll of 8 generated 3D8, and the 9 generated 4D8 and a CRIT (an additional hit that’s automatically 8) 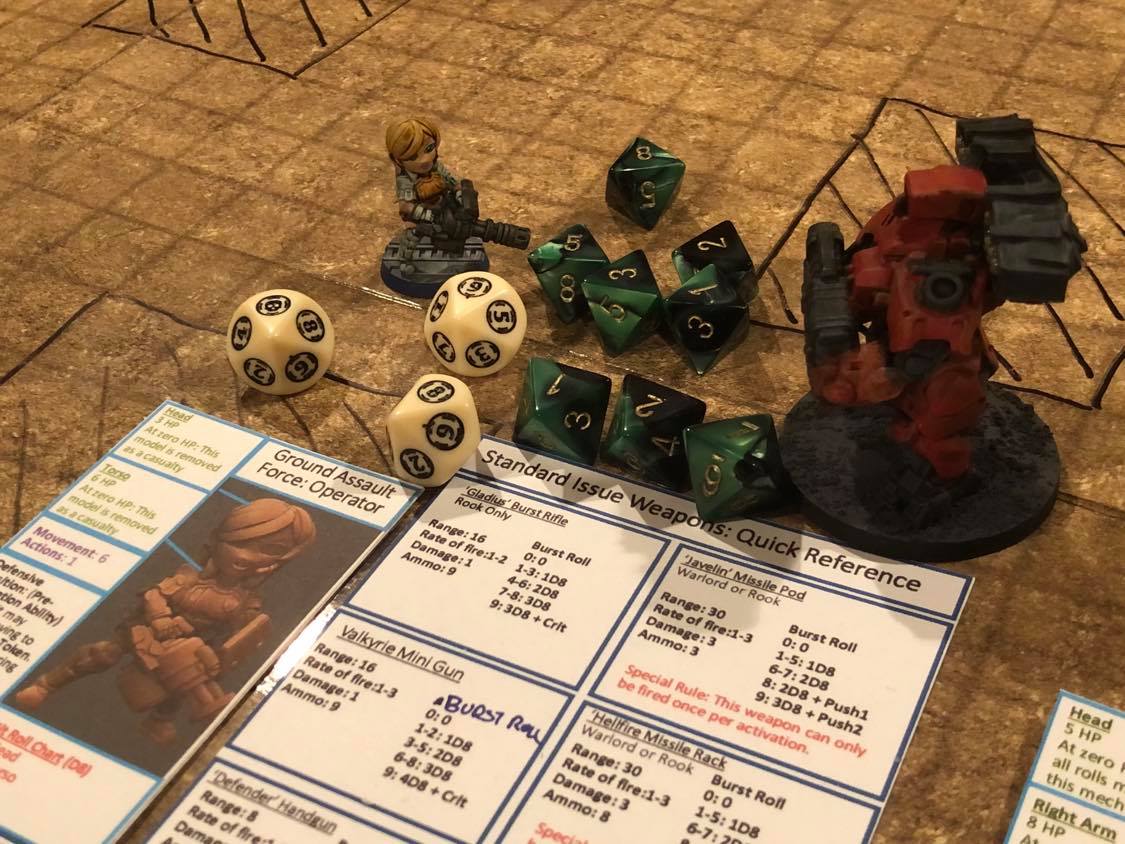 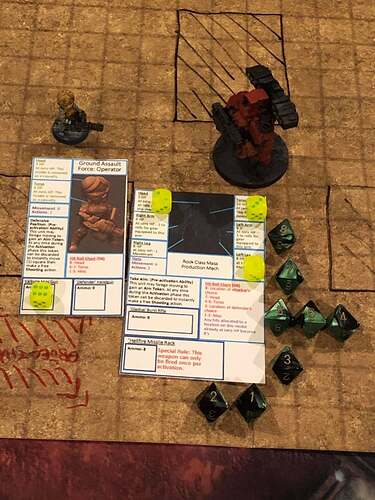 The Rook’s turn [edit] this model has two action points (as opposed to Blondie who only gets one). It can either fire both weapon systems once, or its Gladius Burst Rifle twice. 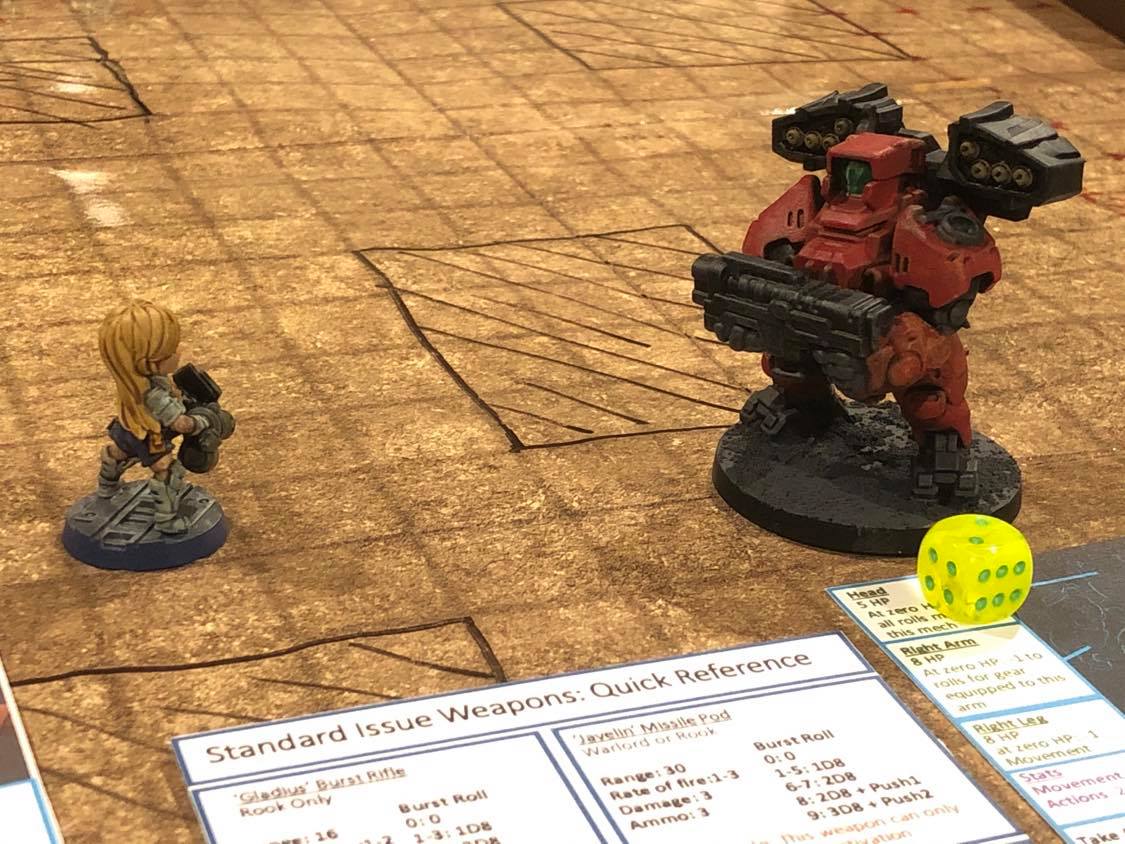 The rook attacks, rolling 2D10 for the burst roll. 4D8 inflict two wounds to the infantry model’s head and one to her torso. [edit] You May notice Blondie is much harder to hit than the Rook. 1-5 on the D8s are all misses. This represents her being a smaller target capable of ducking behind cover and terrain. If only there were anti-infantry weapons that get HIT roll bonuses against this unit type 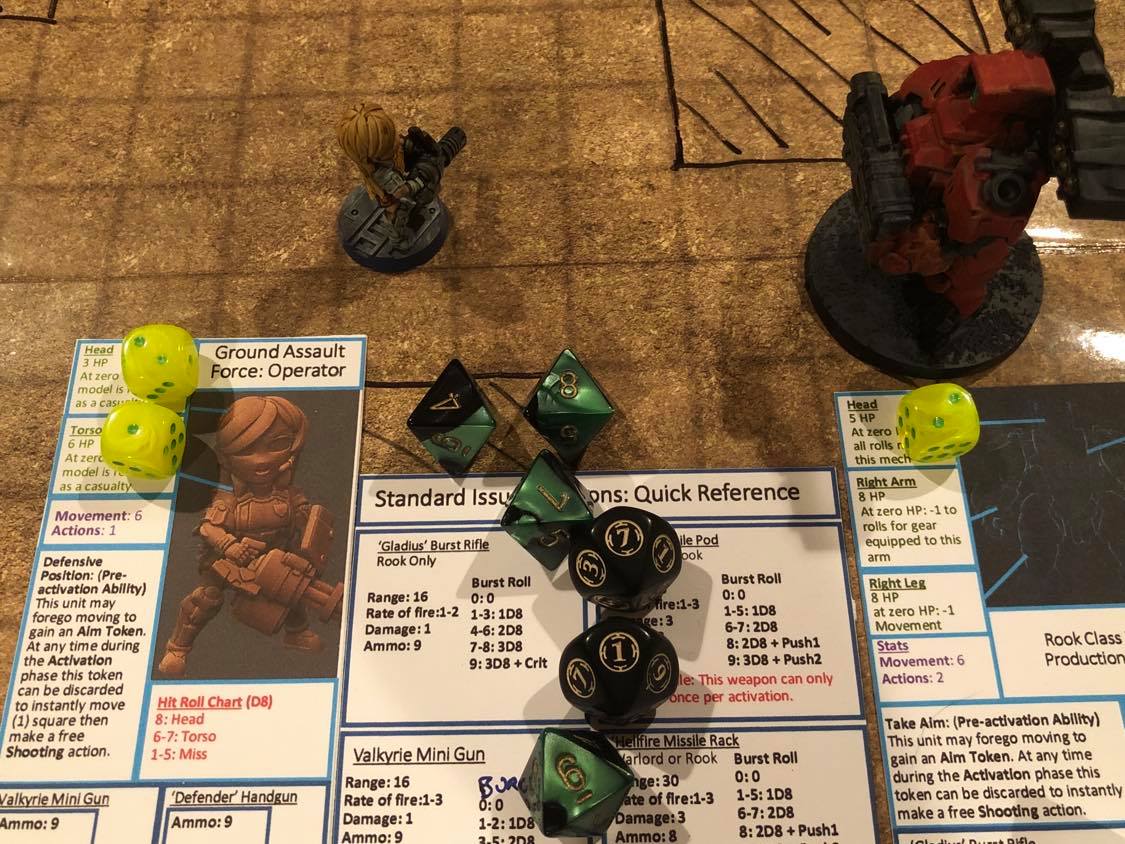 [edit]The Rook fires three missiles from its Javelin Missile Pod, hoping for a good hit or two. Blondie is hard to hit but she can’t withstand a missile impact to the head or two impacts on her torso. Unfortunately the HIT roll whiffs horribly. This infantry model was nearly a casualty, but keeping a low profile, hugging micro-terrain, and bad opponent dice rolls helped a lot 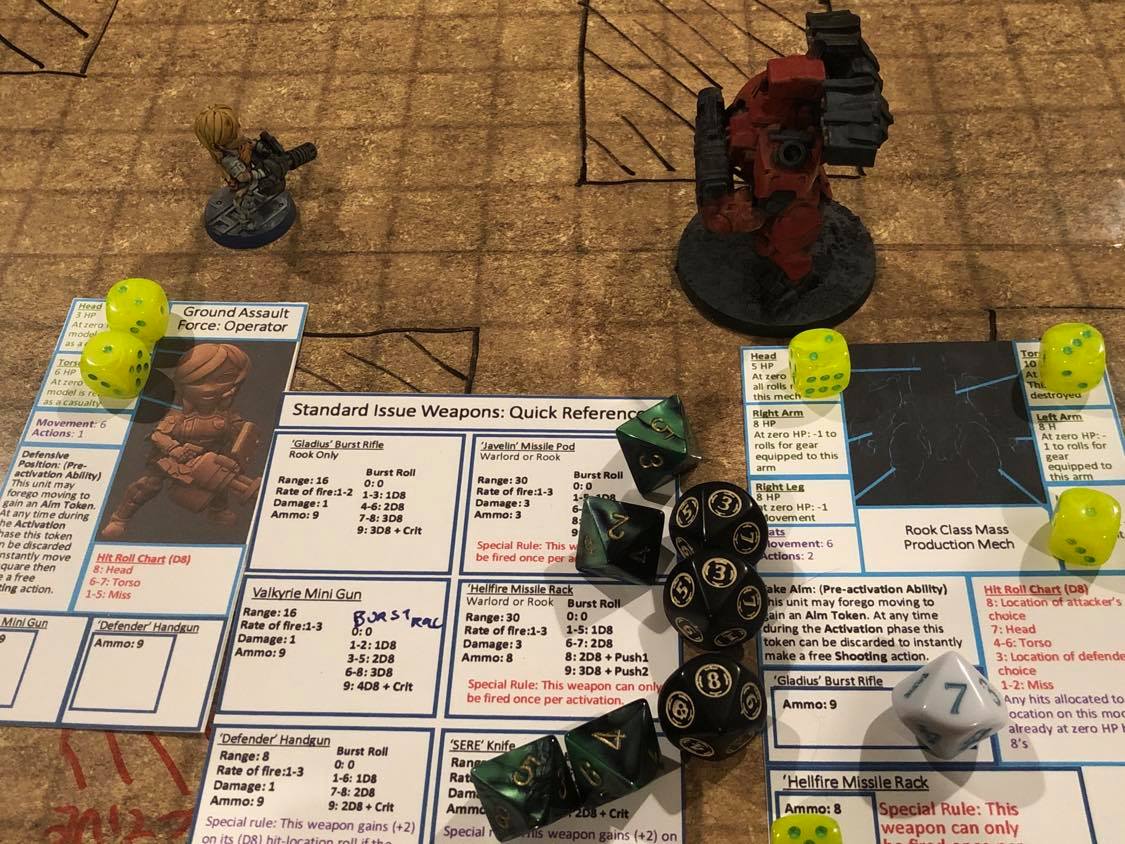 ignition:core has a limited edition box !

Pre-order sales are scheduled to go live in early October with products shipping out by the end of October. We have a few loose ends to figure out including cost of shipping (both US and international).

The box will be a limited print item, a ‹ thank-you › gift to early adopters who purchase the « all-in » bundle.

We will start by offering the « all-in » bundle to keep the overall price per miniature as low as possible. Smaller bundles will become available later as we become more established. You can see the contents of this bundle at our website at

To keep costs low we will be offering all printed material as free PDF files to be downloaded from the website. Resin miniatures aren’t cheap but we are happy to bring these to you at a very competitive price point.

We will be offering a limited edition pilot mini (to be announced soon) with all starter-bundles purchased while stocks last. The pricing and contents of the smaller bundles will be up on the website soon. Stay tuned! 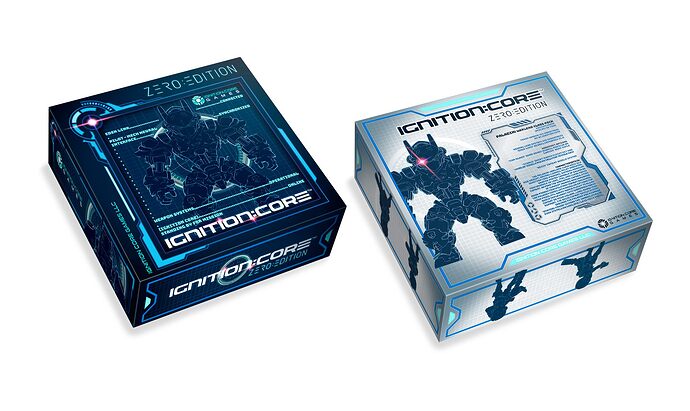 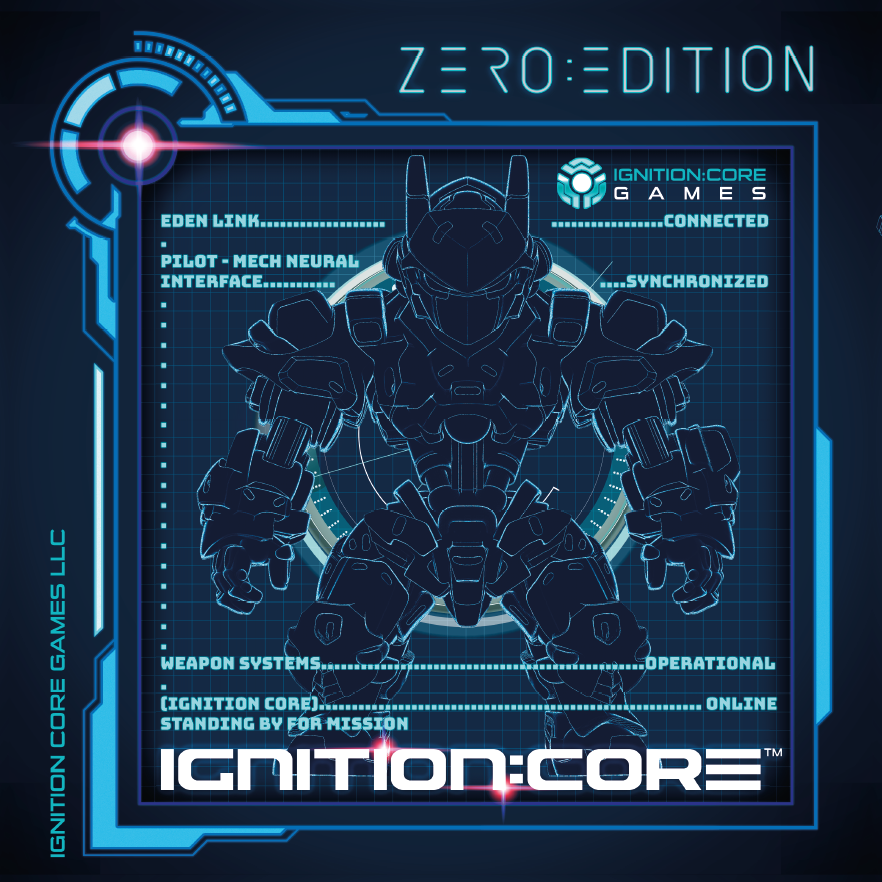 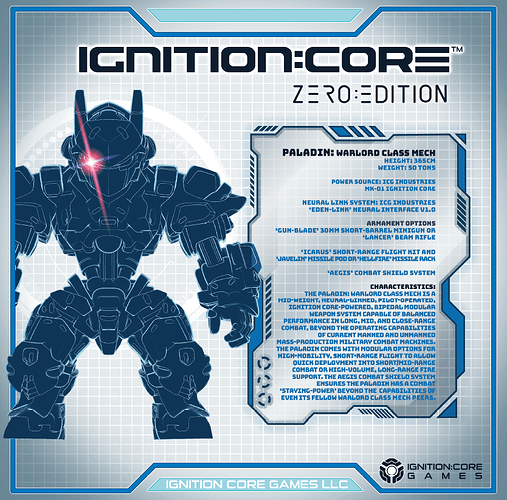