Rise of the Necromancers - Boutique Philibert

Mythic Games is proud to unite forces with Sore Loser Games to launch a crowdfunding campaign. Rise of the Necromancers and its expansion, Dawn & Demons, will fly the Phoenix Line’s colors. Additionally, designers Thorbjørn Christensen and Christoffer Kyst have designed a brand new expansion, Undead Sea, which will be launched during this campaign. Rise of the Necromancers is an Evil strategy game for 2-5 players, with a gameplay time spanning between 45-120 minutes and recommended for ages 13 and up. Each player assumes the role of an evil Necromancer trying to wrest ultimate power from everyone’s hands. Raise and manage undead armies, explore dungeons in search of ancient artifacts and fight your rivals! The player who places their thirteenth Dominion wins the game. Dawn & Demons introduces demons for Necromancers to summon, powerful beings able to command your army. This expansion introduces a co-op mode and a solo mode that pits you against the forces of light, led by the Bishop of Light. However, you can still play competitively against the powers of good!

In Undead Sea, the Necromancers have vanquished the Bishop of light thanks to the Demons… who have destroyed the land in return. The Necromancers take it to the seas in a brand new game board and need to find a Soul ship to pour their mind into, and they sail to conquer islands and continents alike. Should they come across the denizens of the deep, they must vanquish them to raise them into the wake of their ship. 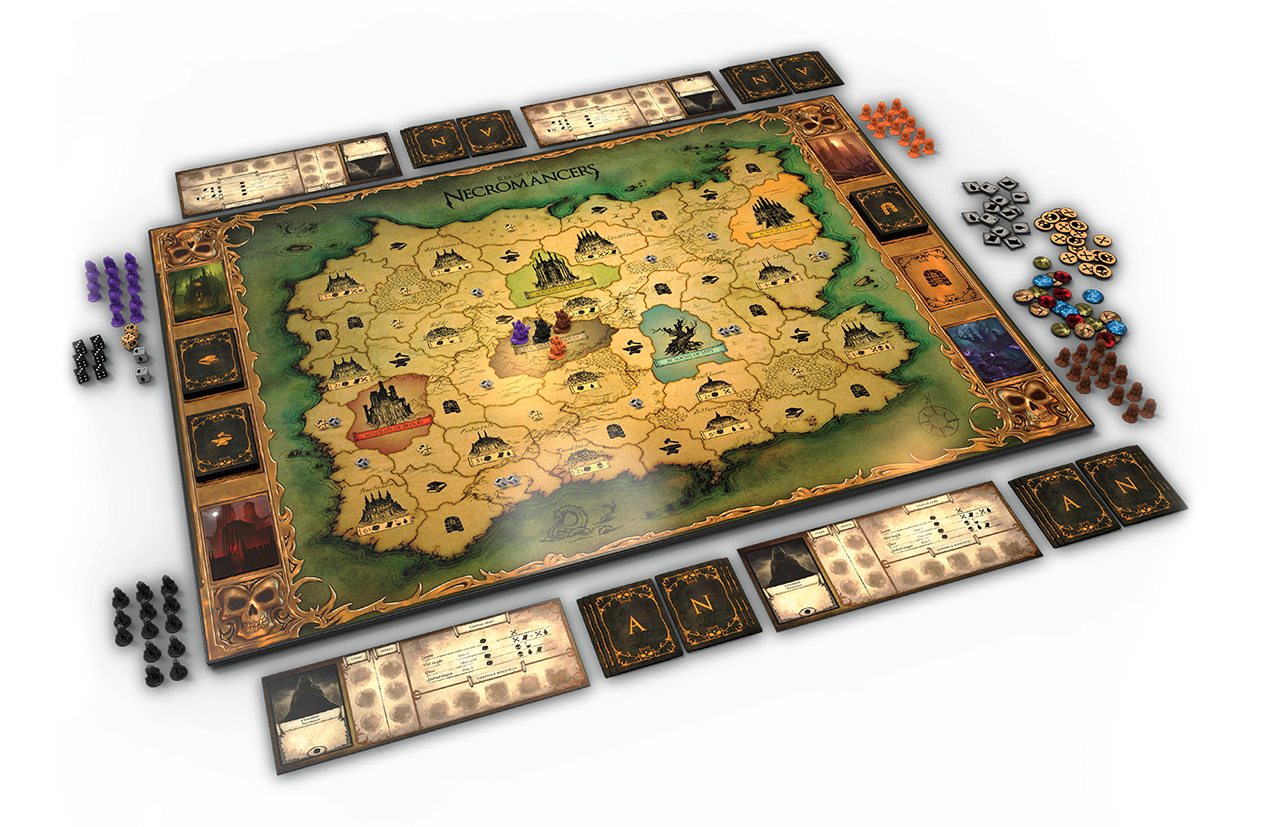 Rise of the Necromancers is a new addition to the Phoenix Line! As the phoenix symbolizes rebirth, the games we publish under this label are ones we feel deserving of another chance in the limelight. These do not have to be miniatures games, mind you, but just games we love and feel passionate about.

Enchanters, our first reborn game Phoenix Line, began its new lifecycle with a Kickstarter campaign with a new expansion, East Quest, and continued with a very successful pre-order campaign, Darklands, reaching a greater audience than ever. The Enchanters line will kick off in retail, after a challenging COVID and shipping crisis period, in the latter half of 2022 (Q3).

The second game in the Phoenix Line, Rise of the Necromancers will be available in retail in late 2022 (Q4).

This time, Mythic Games is going to use Gamefound as its crowdfunding platform. The campaign will start early Q1 2022, and will run for a short duration. Gamefound backers are expected to receive their pledges in Q4 2022.