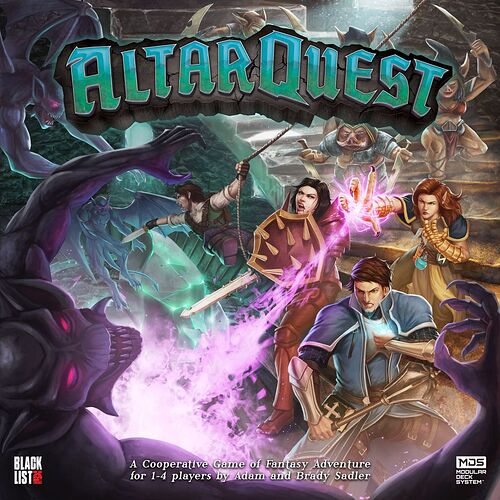 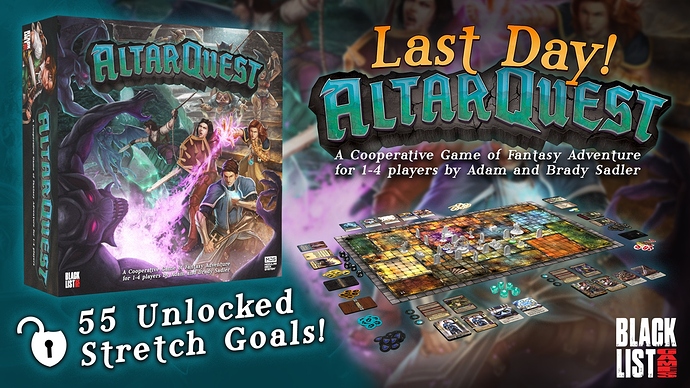 A cooperative game of fantasy adventure for 1-4 players designed by Adam and Brady Sadler.

sam_th novembre 17, 2019, 11:37pm #4
You wanted to know more about Altar Quest? How about we give you a first glimpse into the land of Aridika with a world premiere art reveal?

While many Burry-folk steer clear of intrigue and adventure, more than a few choose a life such as Rowen Lofflin’s, beyond the serenity of Burryland. Since the first altar was discovered, word had traveled fast that danger lurked in the wilds of Aridika. Naturally, most thrill-seekers like Rowen were drawn away from the quiet life in the Five Holds and into a dangerous pilgrimage into the land once ruled by vampires.

Due to the small stature of Burries, Rowen makes the most use out of his various tricks and subtle skills. In Altar Quest, players rely on supplies as a resource to fuel many of their card abilities. Rowen excels at both scavenging for supplies and using them in a variety of ways. Whether he’s cooking up a snack to restore his companions’ resolve, or scouting ahead and placing clever traps to trip up foes, Rowen is definitely an asset to any adventuring party.

Altar Quest is a cooperative game of fantasy adventure for 1–4 players. Designed by Adam and Brady Sadler, Altar Quest draws upon the success of their Modular Deck System (introduced in Street Masters and Brook City) and is based in their all-original setting inspired by high fantasy and Gothic horror. Featuring standalone quests, campaign play, and highly modular gameplay, Altar Quest puts players into the roles of powerful heroes seeking to drive the forces of darkness away from the « altars » that corrupt the world.

Stay tuned to learn more as we prepare to bring Altar Quest to Kickstarter later this year! 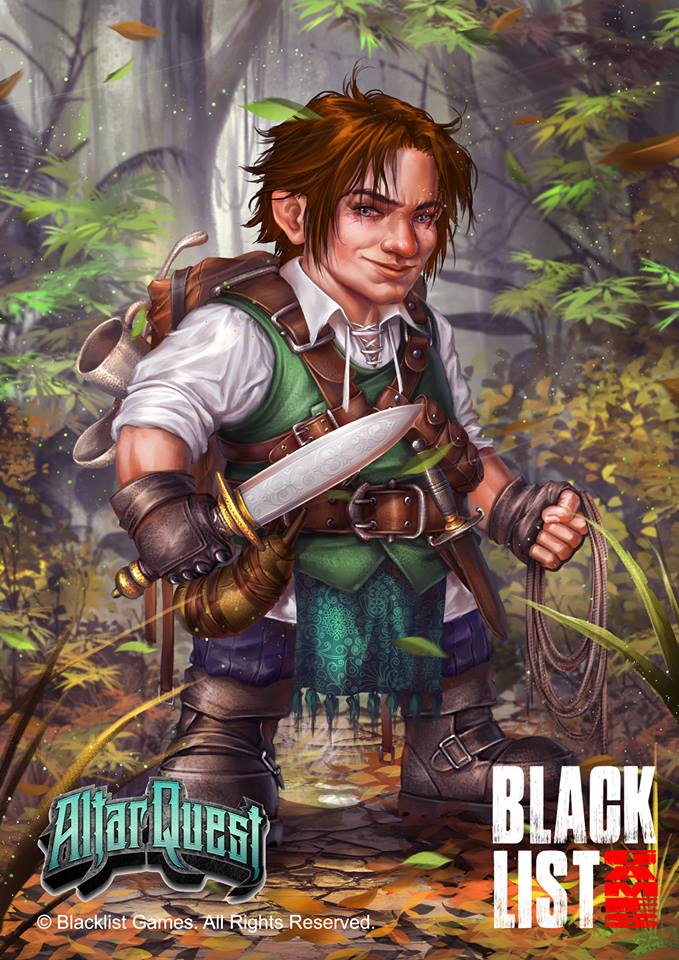 Who is this dashing adventurer? Why, he’s Sedrin Highmoor, of course!

« The light of Aluna is fading, devoured by the unclean… »

Sedrin Highmoor is one of many devoted priests of Aluna, the rhune of light. But unlike many of his brethren, Sedrin refuses to seclude himself in the safety of his church while dark forces feed upon his sovereign host. Sedrin draws upon his faith in restoration to both cleanse the corruption spewing from the altars and to aid his allies against mortal injury.

In Altar Quest, heroes will have to balance their offensive capabilities with their defensive preparations. This is represented by the altar dice pool, present in every game. The altar dice represent corrupted and twisted powers from the Rhunic gods that were not meant for mortals, unleashed on the world by the lich queen Szera. While all heroes will draw upon and influence these dice in different ways, Sedrin uses light results to aid his companions and deliver Aluna’s wrath to his enemies.”

Altar Quest is a cooperative game of fantasy adventure for 1–4 players. Designed by Adam and Brady Sadler, Altar Quest draws upon the success of their Modular Deck System (introduced in Street Masters and Brook City) and is based in their all-original setting inspired by high fantasy and Gothic horror. Featuring standalone quests, campaign play, and highly modular gameplay, Altar Quest puts players into the roles of powerful heroes seeking to drive the forces of darkness away from the « altars » that corrupt the world.

Stay tuned to learn more as we prepare to bring #AltarQuest to #Kickstarter later this year!

Hailing from the swamp isle of Greyst, the various frox clans have a long history of infighting. These frog-like creatures are bred into violence and seek only to wreck and ruin. They are not a completely unintelligent people, but their development is severely hindered by their inability to understand such concepts as compassion and empathy. They are advanced enough to have organized religion, but their faith revolves around appeasing their “Sludge Lord,” whose will is completely foreign and unintelligible to anyone but his mad priests. War is everything in frox society; however, “war” to the frox could be anything from a full scale assault on a rival clan, to a mere hunting expedition or village raid, where they typically only go after livestock. When the frox march to war, they are generally led by an elder belcher—a particularly large frox capable of spewing rancid artillery—and their warbands usually consist of bogmancers, hit-and-run muckslingers, and ruthless raiders.

In Altar Quest, enemies are represented by three distinct decks. Threat decks contain minions from a particular type of enemy (such as the frox). Villain decks are focused around a single iconic and dangerous enemy that can lead a threat deck of their enemy type, or can be mixed with any other threat deck. Finally, random enemies appear from the lurker deck, that contains 1 of each type of enemy figure in your collection.

The frox are a particularly dangerous threat, since they can poison the heroes and ruin their supplies, which is an interesting concept in Altar Quest. The heroes have a shared pool of supplies that represents everything from their food, survival gear, and any odds and ends that are needed to survive the harsh underground of Aridika. While heroes can gain supplies by searching, they will need to manage their pool because some hero abilities require supplies to trigger and some enemies can do significant damage to under-supplied parties… 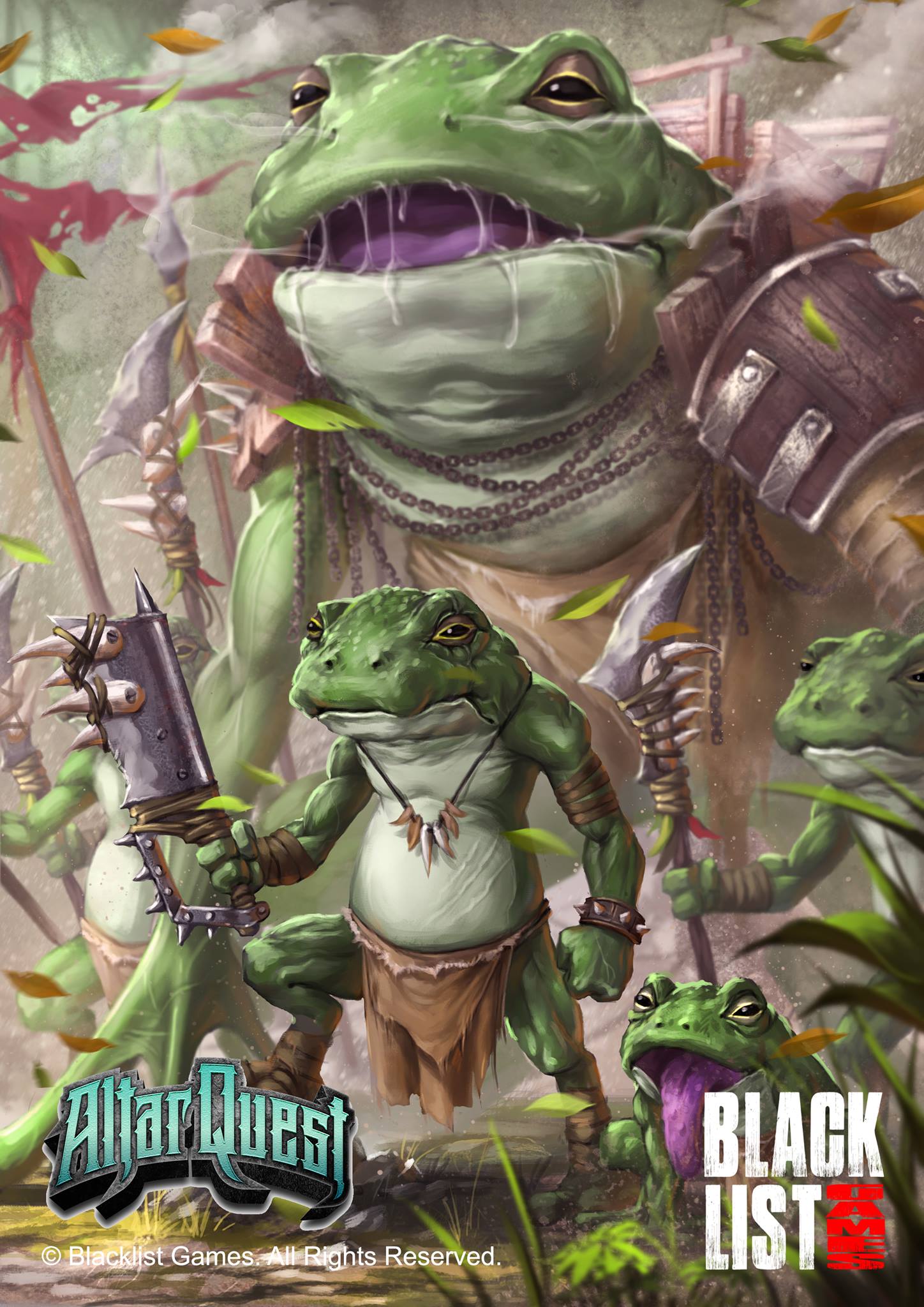 Each hero in Altar Quest has their own unique deck of cards, which consists of a character card, equipment cards, and hero cards. Today, let’s focus on Sedrin’s hero character card.

The six numbers running down the side of the card are the hero’s attributes. These numbers determine how well a hero can deal with the various tests in the game. From top to bottom, the attributes are; might, fortitude, agility, willpower, charisma, and intellect. The number in the lower right, on the green background, is the card’s range. When a card effect lists « within range, » it is referencing a number of squares away from the hero equal to the card’s listed range.

« Aluna’s Gift » is Sedrin’s character card ability that he can choose to trigger once per round (as it exhausts the card when triggered), as long as there is the appropriate rhune symbol available in the altar pool. In this case, the required rhune symbol is light. If Sedrin chooses to use this ability to heal himself or an ally, he must exhaust his character card and roll 1 altar die showing the light symbol. Hopefully he doesn’t roll a rhune symbol the enemies need to retaliate! 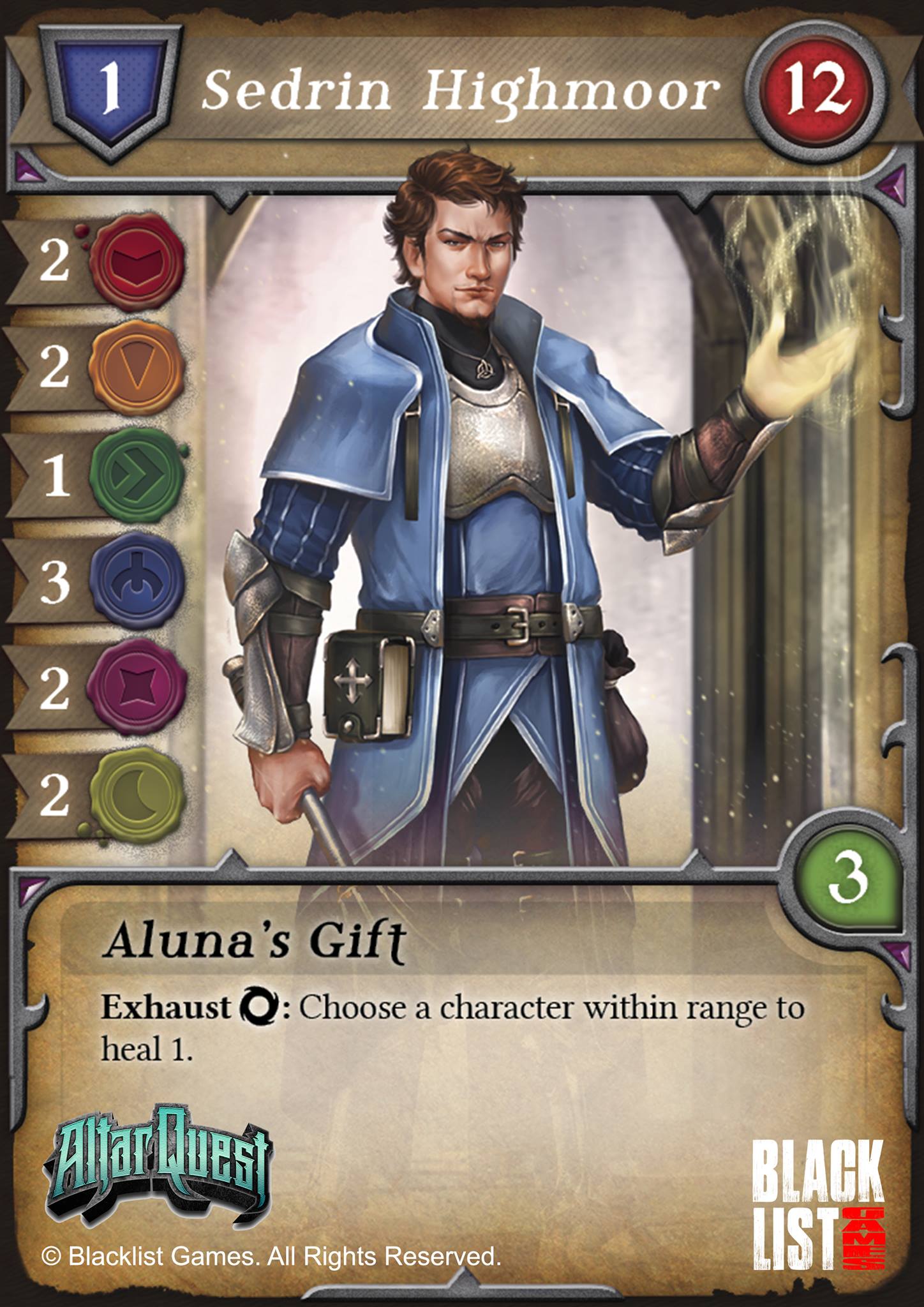